The world mourns the passing of Nelson Mandela, but Satan welcomed him in Hell last week. Were it not for patriots who reminded us of Mandela’s true past history many of us would be shedding a tear this week. But aren’t we all sometimes victims of mass media propaganda campaigns once in awhile? That’s what advertising is all about, accentuating the positive and ignoring the negative. We all are reminded of the 27 years that Mandela was imprisoned in South Africa but how many remember why he was arrested, tried and convicted of his crimes. Cliff Kincaid writing in Accuracy in Media said:

Many in the media are calling Mandela a “political prisoner” when he served prison time. But on the Fox News “Special Report” show on December 5, Jesse Jackson admitted Mandela told him that he was planning bombings of hospitals and schools in South Africa when he got caught. That is why Mandela went to prison. He ran Umkhonto we Sizwe, the terrorist wing of the African National Congress (ANC) and South African Communist Party. The white minority made a deal to release him because they feared for their lives against a Soviet-sponsored terrorist onslaught that was documented in 1982 Senate hearings entitled “The Role of the Soviet Union, Cuba, and East Germany in Fomenting Terrorism in Southern Africa.” 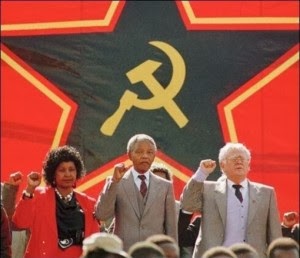 Contrary to what the media is telling you, Nelson Mandela wasn’t jailed merely for opposing the apartheid government of South Africa. He was jailed to stop him from carrying out wide-scale terrorism on behalf of the global-communism-seeking Soviet Union.

As Peter Wright points out in his article, Mandela–Mass Murderer Turned Into Saint by Media,

“Mandela was imprisoned for conspiring and supporting acts of terrorism, mainly the blowing up of infrastructure (power lines) plotting to place bombs in public places (railway stations, etc.) and stockpiling weapons and explosives to carry out terrorist attacks.”

The American Free Press reports that at the trial of Mandela and the 19 other members of the terrorist group he founded, with whom he was captured (half of whom were white communist Jews), the prosecutor said that the munitions they possessed were “sufficient to blow up a city the size of Johannesburg.”

Nelson Mandela’s wife, Winnie, earned infamy for herself for her urging followers to engage in the “necklacing” of political opponents–a tire is placed around the bound victim’s neck, doused in gasoline, and set on fire. Thousands and thousands of people in South Africa have been murdered in this way.

Multiple sources report that Winnie publicly taunted her foes by shaking a box of matches in her hand, proclaiming, “We may not prevail at the ballot box, but we will win with the matchbox.”

Even the later version of Nelson Mandela, the exalted, supposedly peace-loving statesman that the Western white liberal media turned him into, openly sang and danced to popular songs calling for the killing of all white people in South Africa. It’s on video.The heinous genocide being carried out against whites in South Africa and Zimbabwe in recent decades, along with South Africa’s horrific, runaway violent crime spiral, is well-known to those who follow such things.The American Free Press puts the number of whites murdered by blacks in South Africa at 68,000 since 1994, when Nelson Mandela became president. 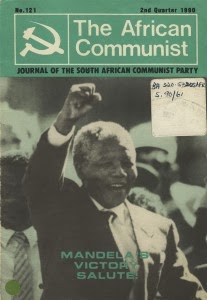 The great influence behind the liberal news media has always been the world-wide communist movement and it was from them that Nelson Mandela had his past rewritten. The word rewritten doesn’t fully explain what the alchemists achieved in transforming the terrorist Mandela into the Nobel Peace Prize cum President of the Republic of South Africa (1994-1999). From a member of the Central Party Committee in the SACP, the South African Communist Party and the ANC, the African National Congress that has been the ruling party of post-apartheid South Africa on the national level since 1994, Mandela’s journey has been supported by every pro-communist liberal in the world. From Hollywood leftists who popularized him in the film Invictus to Bill Cosby who chaired the “Unlock Apartheid’s Jails” campaign. Hundreds of stories glared from the front pages of our national press along the same lines that ran in the 1950s when the liberals were writing about Communist Fidel Castro being the Robin Hood of the Sierra Madres before he took over Cuba and admitted he had always been a Communist. The BBC published a story on December 6th, Mandela death: How a prisoner became a legend that described the extent of the Mandela mania going on in Great Britain.

In the UK, the local anti-apartheid movement hosted an annual Bicycle for Mandela event. In the Netherlands, they issued a Mandela coin in opposition to the Krugerrands. In the US, the committee launched an “Unlock Apartheid’s Jails” campaign, under the chairmanship of actor Bill Cosby.

So successful had the global Free Mandela campaign become that in 1978, the prime minister of apartheid South Africa, John Vorster, bemoaned the fact that the world was seeing Mandela as the “real” leader of black South Africa.

By the mid-80s musicians such as Bruce Springsteen and Miles Davis were sprinkling some stardust on the anti-apartheid movement. The song Free Nelson Mandela became a Top 10 hit in Britain.

After the job they did remaking Nelson Mandela from a communist terrorist into a saint, the pro-communist mainstream news media work that transformed Barack Hussein Obama into a halo-crowned messiah figure must have been a piece of cake. If and when patriots get around to that Second American Revolution thing they’ve been talking about, those editors and publishers of the leftist mainstream news media may find themselves one of the early targets.

2 thoughts on “BEHOLD! The almighty power of the news media. Able to transform terrorists into saints. Good luck in Hell, Mandela.”