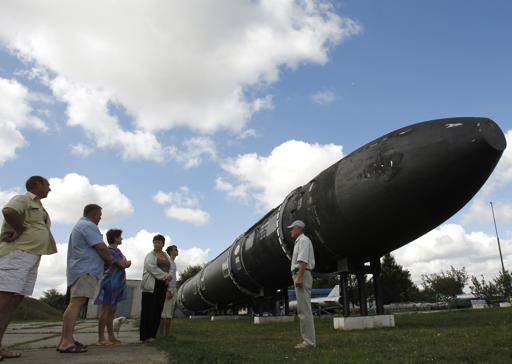 While Obama guts the American military… as we disarm and as we dismantle our nuclear capabilities, Russia is upping the ante. The ‘flexibility’ that Obama was whispering to Russia not long ago, was a reassurance that he would neuter us militarily. Russia busily began strengthening their nuclear arsenals.

Russia is preparing to dance with Europe:

Poland and three Baltic states have voiced their alarm over plans by Russia to move nuclear-capable missiles close to their borders.

“Plans to deploy Iskander-M missiles in the Kaliningrad district are disturbing and Poland has said so many times,” its foreign ministry said in a statement.

Warsaw said it had received no official word from Moscow about the deployment, which a Russian defence ministry spokesman confirmed on Monday.

“This is a matter for NATO and we can expect possible consultations and action (…) at the NATO and EU level,” it added.

Relations with Russia have been frosty since Poland shed communism in 1989 and went on to join NATO a decade later.

Baltic states Estonia, Latvia and Lithuania have also had difficult ties with Moscow since they broke free from the Soviet Union in 1990-91 and joined the EU and NATO in 2004.

“It is clear that it is alarming news as it is one of the arguments changing balance of powers in our region,” Latvia’s Defence Minister Artis Pabriks said Monday, quoted by the Baltic News Service (BNS).

He was echoed by Estonia and Lithuania whose defence ministers termed the move both “alarming” and “cause for concern”.

The Russian deployment comes in response to the planned US-led deployment of a disputed air defence shield.

The advanced version of the Russian missile has a range of 500km and could potentially be used to take out ground-based radar and interceptors of the new NATO shield.

The Kremlin warned in 2011 that it could station the short- and medium-range ballistic missiles along the European Union’s eastern frontier in response to NATO’s missile defence programme.

War is not coming, it is here. The Cold War shifted and our enemies infiltrated us. The Russians, Chinese and Islamists are within our own walls and we have handed them the keys to the American kingdom. As Sun Tzu says: “All war is deception.” We’ve been had. Either the coup from within will be complete, exposing our soft national underbelly to our enemies, or due to military weakness, our enemies will decide now is the time that America can be attacked. She is at her weakest militarily, financially and morally. Our enemy’s odds of victory grow by the day due to our Progressive leadership. It is not incompetence… it is a contrived malignant evil intention that has been painstakingly planned and executed behind the scenes. Our rulers tell us that our enemies are our friends and our friends are our enemies. We are down the communist rabbit hole with no way out, except to return to the Reagan Doctrine of (1) peace through strength; (2) trust but verify; and (3) beware of evil in the modern world.

The Russians have no use for the faux US nuclear treaties with them. They were never meant to restrict Russia, just America:

MOSCOW (Reuters) – Russia will begin deploying a new type of long-range missile in 2018 to replace a Cold War standby known in the West as “Satan”, a military commander said on Tuesday in a signal to the United States that Moscow is improving its nuclear arsenal.

“We are counting on being armed with this qualitatively new missile system … by 2018-2020,” he was quoted as saying.

The Voyevoda, whose NATO name is the SS-18 Satan, was developed in the 1970s and the missiles are approaching the end of their service life. Karakayev said some of the ICBMs would remain in service until 2022.

The commander spoke on the anniversary of the creation in 1959 of the Strategic Rocket Forces, the military branch in charge of the ICBMs that were the stuff of nightmares in the United States during the superpower standoff of the Soviet era.

Russia and the United States signed the latest of a series of treaties restricting the numbers of ICBMs in 2010, but Moscow has indicated it will not go further in the near future, citing what it says are potential threats from U.S. weapons systems.

President Vladimir Putin has emphasized that Russia must maintain a strong nuclear deterrent, in part because of an anti-missile shield the United States is building in Europe and which Moscow says could undermine its security.

A pro-Kremlin newspaper reported on Monday that Moscow has deployed missiles with a range of hundreds of miles in its western exclave of Kaliningrad, alarming the governments of neighboring Poland and the Baltic states.

It was unclear whether the Sarmat was a missile that Russia tested in May 2012 and said should improve Russia’s ability to foil missile defense systems. The Defense Ministry did not reveal the name of that missile.

I might add that I would not believe the timelines. I believe that Russia is beefing up their nukes now, if they have not already done so. The Chinese have as well. Both are supplying Iran and North Korea. Do the math as the nuclear countdown clock strikes midnight. Russia is making nuclear moves, yet the press seems to care not at all. China challenges us in International waters and the media yawns. Americans better pay attention or do we feel lucky? Well, do we?

I will leave you with a fantastic quote from Allen West:

Welcome to the inept foreign policy world of President Obama. We pivot from the Middle East, destabilizing it and promoting the rise of Islamic totalitarians. Then we negotiate with the Iranians while they march forward to a nuclear capability. When we “pivot” to the Pacific, China threatens one of our ships. We hit the reset button with Russia, and it’s stuck on stupid. Whatever happened to “peace through strength?” I’m not digging this “lead from behind” stuff — down South we call that following.