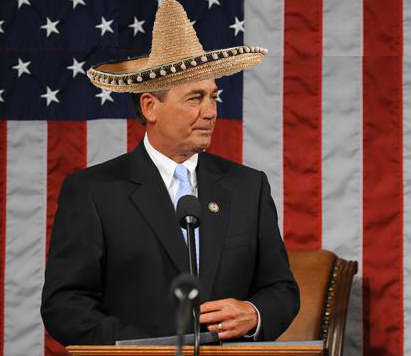 Hear that? That’s the bleating of a bunch of Republican sheep who just can’t wait to run off the Amnesty cliff. Welcome to Republican suicide. It’s not enough that the Marxists are destroying the Republic, oh no… our faux conservative leaders are doing everything they can to help them. It’s for our own good, don’t ya know. Screw the Constitution… screw what the majority of Americans want. The elites on both sides of the political chasm want slave labor and a perpetual voting Marxist majority. I have warned on Amnesty for years and now it is upon us. Get ready to meet the Nightmare on America’s Streets – the final chapter. What Obamacare kicked into gear, Amnesty will finish.

Ann Coulter echoes what I have said in the past:

It’s terrific for ethnic lobbyists whose political clout will skyrocket the more foreign-born Americans we have.

And it’s fantastic for the Democrats, who are well on their way to a permanent majority, so they can completely destroy the last remnants of what was once known as “the land of the free.”

The only ones opposed to our current immigration policies are the people.

Jeff Sessions, who has been a stalwart, lone voice in the wilderness in opposition to this travesty, has continuously and vociferously warned the Republicans about crawling into bed with the Marxist Democrats and forcing Amnesty upon Americans:

And bad policy, the senator from Alabama details. “Coordinating with a small group of the nation’s most powerful special interests, last year President Obama and Senate Democrats forced through an immigration bill which can only be described as a hammer blow to the American middle class. Not only would it grant work permits to millions of illegal immigrants at a time of record joblessness, it would also double the annual flow of new immigrant workers and provide green cards to more than 30 million permanent residents over the next decade. These new workers, mostly lesser-skilled, will compete for jobs in every sector, industry, and occupation in the U.S. economy.”

He adds, “House Republicans, in crafting immigration principles, should reply to the President’s immigration campaign with a simple message: our focus is to help unemployed Americans get back to work—not to grant amnesty or to answer the whims of immigration activists and CEOs. In turn, that message could be joined with a detailed and unifying policy agenda for accomplishing that moral and social objective.”

Welcome to the worst of all possible worlds, where you have crony capitalists, corrupt big business, Marxists and elitists all spooning in public and doing whatever they please – America be damned.

There will also be other ugly consequences such as overloading the immigration system. Why, how very Cloward and Piven. The overload will not only break us financially, but will ensure that known hardcore criminals will not be deported and will be allowed to run free, preying on Americans and causing the much desired chaos that communists love. A third world hell will envelop the US and our Ghost of Caesar will reign while fire, poverty, evil and death engulfs the land of the free.

While Republican leaders simply insist that ‘something big’ has to happen concerning immigration, America sees this for what it is. It is a maneuver to destroy the Constitution, our rights and freedoms. A move that does away with our borders and America as an entity and as a bastion of freedom for all. It is a move into dictatorship and chains that our Founding Fathers warned us against. This is how a Republic dies – with thunderous applause by the Marxist elite and their idiot sycophants. 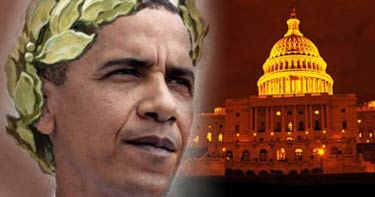 The TEA Party is being hunted down and persecuted, while those, such as Paul Ryan, who once appeared to be a true conservative, are betraying America and pushing for Marxist rule. A modern day Judas of sorts, who has been plied with 30 pieces of silver. Hope it was worth it sir. Perhaps he has succumbed to the belief that being an elitist Progressive makes him a star or royalty of some sort, and that by embracing Marxist ideals, he will dine in Obama’s halls on fine cuisine and the finest of wine, while consorting with celebrities such as the Duck Dynasty crew that he posed with before Obama’s SOTU Marxist declaration. Enjoy your dalliance in the realm of the communists. They will be defeated by patriots and their time will come. Ask the Romans, it’s the price of notoriety.

It’s expensive maintaining an imperial class, but money isn’t really the object here, and neither is the current occupant of the White House, unlikeable as he is. Whether it’s Barack Obama or some subsequent pathological megalomaniac, Republican or Democrat, the increasingly ceremonial and quasi-religious aspect of the presidency is unseemly. It is profane. It is unbecoming of us as a people, and it has transformed the presidency into an office that can be truly attractive only to men who are unfit to hold it.

George Washington showed the world that men do not need a king. We, his heirs, have allowed the coronation of something much worse.

Boehner has even gone so far as to actively state that he wants to do a year of activity together with Obama. You remember Obama’s SOTU this last week where he declared himself Caesar once and for all, right? That no Congress or pesky Constitution would stand in his way of progress. Well in a treasonous move, House Republicans responded to President Obama’s State of the Union vow to move forward on a “year of action” with or without Congress, by saying they agree and want to partner with him. You can bet the partnership includes Amnesty and the betrayal of conservatives en masse.

Pat Buchanan says that Boehner will lose the Speakership if he pushes Amnesty. I wouldn’t count on it. There are so many Progressives now on the Right, that you really only have one party left. Buchanan is right though, this is a trap and the Republicans are walking right into it and they have full knowledge of it and embrace it. Buchanan is also right on the passage of Amnesty being the end of the Republican Party. If this happens, there will be a war inside the Republican Party and there will either be a coup and the TEA Party will ascend or the Party of Lincoln will be no more and a third party will awaken. In my opinion, it will be too late at that point to avoid a violent collision between political viewpoints. There will be two sides – Constitutional Conservatives and Progressive Marxists. It will not end well.

Here it comes… Amnesty and 30 million or so people who will invade our country and enable a permanent Marxist coup. Our enemies from within and without are descending and our leaders are holding the door for them.

27 thoughts on “Here It Comes – Amnesty”