“How was your flight over? I hope that little scare concerning “Toothpaste Bombs” did not spoil your flight.” 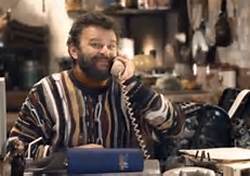 The Department of Homeland Security has issued a warning to U.S. and some foreign airlines traveling to Russia for the Olympic Games to be on the lookout for toothpaste containers, which some intelligence indicates may actually hold ingredients that could be used to construct a bomb aboard a plane, a senior U.S. official told ABC News.

The official did not provide further details about the warning or the intelligence that prompted it, but an official with the Department of Homeland Security, while declining to discuss the specific warning, said the department “regularly shares relevant information with domestic and international partners, including those associated with international events such as the Sochi Olympics.”

“While we are not aware of a specific threat to the homeland at this time, this routine communication is an important part of our commitment to making sure we meet that priority,” the official said. “As always, our security apparatus includes a number of measures, both seen and unseen, and DHS will continue to adjust security measures to fit an ever evolving threat environment.”

A federal law enforcement source said the information is largely intended for foreign carriers and the generic threat is not directed at the U.S. homeland. The Russian government has been informed, the source said.

“And, do not worry about that strange symbol on the bottom of your I-Phone, that is just one of our hackers. In fact, even now our citizens are all working together to make sure you stay is a comfortable one.”

It appears there aren’t enough pillows for the athletes in the Olympic Village. This news comes via the Instagram posts of Luiza Baybakova, a member of the catering staff for the games.

Baybakova posted a picture of a notice to volunteers, which translates as follows:

Due to an extreme shortage of pillows for athletes who unexpectedly arrived to Olympic Village in the mountains, there will be a transfer of pillows from all apartments to the storehouse on 2 February 2014. Please be understanding. We have to help the athletes out of this bind.”

We monitored both Russian-language social networks and Instagram for posts related to the Olympic Village, and ran across this controversial gem.

Either the athletes arrived early, or event planners somehow didn’t know when they were arriving. Regardless, it seems like volunteers and staffers might now be asked to give up their own pillows to accommodate the athletes. It’s in line with what other citizen bloggers are posting ahead of the Olympics, like this guy, who claims residents near the stadiums are forbidden from using wood-burning fireplaces to avoid unsightly smoke coming out of chimneys. Even though it’s the Winter Games.

“Your room is waiting at our finest hotel, where great care has been taken to ensure your comfort.”

Sportswriters from around the world have begun cataloguing a litany of accommodation-related woes in Sochi, Russia as organizers scramble to finish the construction of some hotels three days before the Opening Ceremony of the Winter Olympics, and two days before some competitions get underway.

Journalists have been trickling into the Black Sea resort town all week ahead of the most expensive Winter Olympics in history. Russia has spent $51 billion making all ready for the 17 days of competition, but organizers admitted earlier last week that three of the nine media hotels were not completed.

The Guardian’s Moscow bureau chief Shaun Walker reported that when he tried to check into his room at midday Tuesday, he was told by a receptionist, “Your room is still under construction. They are literally finishing, the keys are literally coming now.” Three hours later, Walker reported the same receptionist offered him a different room “with no heating, a single bed, and permeated with the [odor] of industrial glue.”

Canadian sports columnist Bruce Arthur wrote, “Almost every room is missing something: lightbulbs, TVs, lamps, chairs, curtains, wifi, heat, hot water. Shower curtains are a valuable piece of the future black market here. (One American photographer was simply told, ‘You will not get a shower curtain.’)”

And Kevin Bishop, BBC’s Moscow bureau chief, tweeted that the reception area of his hotel didn’t have its floor done, but it did have a picture of Russian President Vladimir Putin.

“So, do not worry, my American Friends, our own President Putin has guaranteed your safety.”

President Vladimir Putin pointed Wednesday to the Boston Marathon bombings as a big reason for the intense security around the Winter Olympics that Russia is kicking off this week.

The Chechen brothers accused of the 2013 Boston attacks hailed from just a few hundred miles (kilometers) away from the Olympic sites at Sochi. This Black Sea town and neighboring Caucasus Mountains are readying to host world leaders, thousands of athletes and many more spectators at the Feb. 7-23 games.

Twin bombings in another southern Russian city in December have heightened terrorism fears around the Sochi events.

Intelligence agencies from multiple countries will be working together around the clock at a special headquarters in Sochi, Putin said while visiting Olympic sites Wednesday.

“In the U.S., people died at a marathon, during the G-8 there were terrorist acts in the London subway,” he said, according to Russian news agencies.

Putin rose to power and popularity 15 years ago on law-and-order, hard-on-terrorism policies that critics say go too far and suppress human rights. He had long warned the West about the dangers posed by Chechen rebels, and urged closer security cooperation with Washington after the Boston Marathon attacks.

Putin has made security central to the Olympic project, in which he has taken an unusual personal interest.

Despite hang-ups and criticism and higher costs than any Olympics in history, Putin told athletes and staff Wednesday that “Russia is ready to host the games.”

“Have a pleasant stay in Sochi… and never mind all the barbed wire, bomb-sniffing dogs, and machine guns.”

By now, some of you may be thinking that my Blog today is entirely inappropriate.

You are wrong. Ever since Benjamin Franklin wrote “Poor Richard’s Almanac”, political satire has been a potent weapon by which writers and cartoonists have protested the political lunacy of the day.

The Sochi Olympics debacle is no different.

From the idiocy of the International Olympics Committee choosing a Communist Country, where Chechen Muslim Terrorists make life perilous every day, to United States President Barack Hussein Obama (mm mmm mmmm) parading our gay athletes in from of Russian President Putin’s face in a Far Left Political Statement, which made about as much difference as Jamaica in the Bobsled Race, this Olympiad has the makings of the worst disaster since the horrible Munich Olympics in 1972.

For those of us who are old enough to remember the Munich Massacre, the horrible description of it, as given by the late, great ABC Sports Announcer and former newspaper reporter, Jim McKay, haunts us to this day:

I pray that we do not hear similar words at Sochi.

Because, as Iran is proving, by continuing their Uranium Enrichment, after playing Secretary of State John Kerry and President Barack Hussein Obama for suckers, the sponsors of Islamic Terrorism have no respect for the United States of America. We remain, despite the Administration’s flagrant courtship of these barbarians, “The Great Satan”.

And, Muslim Terrorists, such as the ones who killed Israel’s Olympic Team in 1972, whether they are Chechen or Palestinian, if given the opportunity, will not hesitate to kill Russia’s, Israel’s, or America’s Olympians, gay or straight, in 2014.

Please pray for not only our athletes and citizens, while they are in Sochi, but for the rest of the world’s representatives, as well.

I loved the satire and although I am someone who mentally blocks out most commercials… The four words: “Hello, This Is Peggy” made me laugh instantaneously, so I had to repost this!

“And don’t worry about the rumors of President Putin’s negative record on human and animal rights … he is really a pussycat. 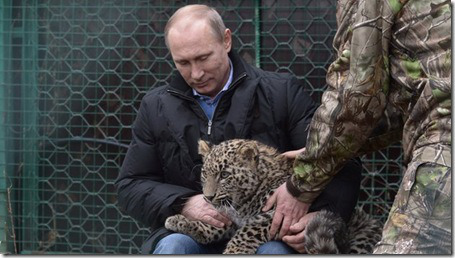 After all, in anticipation of the upcoming Olympic games in Sochi, Russia, countless homeless dogs that have regularly been roaming the streets are now being culled for ‘safety’ reasons. But before the Olympics the Russians were seemingly safe enough and the poor dogs were left to fend for themselves.

It is estimated that Crews have killed thousands of dogs for the Sochi Olympic Games, but as you can see in the staged photo of Putin and the leopard… he is a real animal lover at heart.