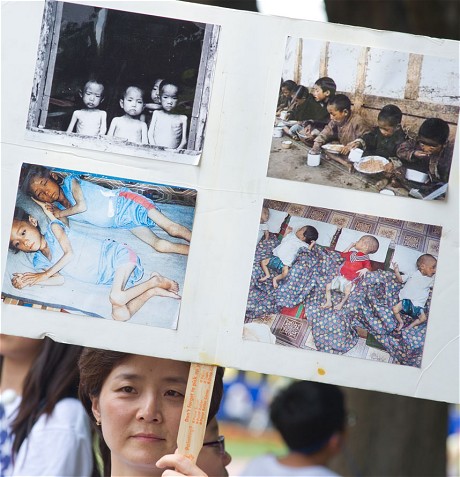 A woman holds up a poster with photos from an internment camp in North Korea. (AFP)

The United States should be deeply ashamed of itself. Not just under Barack Obama, but Presidents who came before him have ignored the monstrous atrocities going on in North Korea now for five decades. Instead, our media focuses on celeb Dennis Rodman, who is absolutely nuts and has a serious bromance with the murderous NoKo dictator. Every once in a while, the Obama Administration will wag their finger and say, “Naughty, naughty!” to the regime and tell them to behave or we will really do something this time. No one believes it, least of all North Korea. And for those out there who have pummeled me with their shrill cries that China and North Korea are not connected – you can get stuffed. China has protected her monstrous proxy at the UN in every way possible, while claiming that the horrendous acts taking place there are not so. Who’s surprised? China is guilty of the same crimes and no one says boo to them. They are the global purse strings with military bite. North Korea has been at this a very long time:

Here are some of Kim Jong-un’s acts of tyranny:

To all this the UN feigns utter shock and they now have to let the world know what is going on. Right. Like they haven’t known all along. It has never been a secret – evidently, the UN is the last to know. In a 372-page report released Monday, the UN parallels the striking resemblance between North Korea and the Nazis. Kim Jong-un was warned that he could be tried for crimes against humanity at the International Criminal Court in The Hague. I’m sure he’s quaking in his jack boots.

Once again, the world does an Eddie Izzard stand up routine and points to the fact that it is their country and they are only killing their own people. It’s none of our business or concern, just like with the Jews. ‘Never again’ evidently is subjective and fickle. It’s almost as if when you kill hundreds of thousands or millions of your own people, the world applauds and says, “Well done!” In death or cake for tyrants, cake always wins out.

Never one to miss an opportunity to make it all about him and deciding he has no choice but to say something, Obama welcomed the ruling by the UN:

At the State Department, spokeswoman Marie Harf said the Obama administration “strongly” welcomed the report. She said it “provides compelling evidence of widespread, systematic, and grave human rights violations” by the North.

“The report reflects the international community’s consensus view that the human rights situation in the [North] is among the world’s worst,” Ms. Harf said.

All the reports and judgements in the world mean very little and do not stop dictators from wonton slaughter of innocents. As so many other weak gestures that have come before, this one will mean little as well. Until someone is willing to put on their big boy pants and take out the little tyrant and his sycophants, his reign of terror will continue apace. The same goes for all the other Commie regimes like China and Russia, and for the totalitarian theocracies such as Iran. This sanctions crap does not work. Peace through strength works. More listless platitudes are being issued by experts and leaders — all assured of failure:

Mr. Kirby, a retired Australian judge, said the international community must take North Korea to task: “We should be ashamed if we do not act on this report.”

Mr. Park said the international community has not paid adequate attention to the human rights crisis in North Korea.

“Twenty-four million North Korean people face one of the worst protracted humanitarian and human rights crises in human history, but the world’s focus has typically gone to Kim Jong-un, the nuclear issue and even [Dennis] Rodman’s bizarre visits,” said Mr. Park, referring to recent visits by the former NBA star to North Korea.

The international community must “increase support for multiple strategies to bring forward change in North Korea, including by working with North Korean refugees and people inside the country to accelerate bottom-up economic, information and social changes that are already happening in North Korean society,” Mr. Park said.

Mr. Kirby said his commission has “given the formula for change” with its report.

Nations cannot say they did not know the extent of the crimes taking place in North Korea, he said. “Now the international community does know. There will be no excusing a failure of action because we didn’t know.”

Many foolishly thought that when Kim Jong-un took his father’s place, that things would change. I mean, after all… he was educated and enlightened in Switzerland. By all accounts, he was incredibly bright, sophisticated and had a love of technology. Progressives adored him and hailed his ascension as a dictator. That illusion was soon shattered as the boy king took hold and proved that he was even worse than dear old dad. He had his uncle, who was the second most powerful man in North Korea, tortured and executed with extreme prejudice. Rumor has it his aunt has now earned the same fate. He had an old girlfriend and her musical group executed by firing squad for trumped up charges of prostitution and immorality. Whispers say her only crimes were Christianity and the new wife of Kim Jong-un being jealous. Best to wipe the slate clean. Then Kim tested nukes, cuddled with the Iranians, Chinese and Russians and threatened repeatedly to wipe the US and South Korea off the map. So much for change – something we have come to know and dread under Obama.

The UN is a joke. A deadly one. Now they are chastising the Chinese over North Korea, threatening to hold them responsible as well. The Chinese don’t give a rat’s ass about the UN. They are a nuisance to them and that is all. Even after all of this, the UN softens its verdict by stating that Kim Jong-un may not have committed all the atrocities, but he is to be held responsible. You guys are a bunch of idiots. Of course he knows what is going on and China knows too:

The UN panel has warned China’s government that it might be “aiding and abetting crimes against humanity” by sending migrants and defectors back to North Korea to face torture and execution. It said that Beijing had in some cases forwarded to Pyongyang “information about the contacts and conduct” of North Korean nationals, despite knowing that they would almost certainly face torture if repatriated.

China has hinted that it will use its UN security council veto to prevent the International Criminal Court indicting Kim Jong-un. However, a separate ad hoc tribunal could be convened.

While Kim Jong-un might not have explicitly sanctioned every crime committed by Pyongyang’s enforcers, the absolute power that he wielded meant he bore ultimate blame, Mr Kirby added.

“If you have the power to stop it happening, you have to bear a degree of responsibility,” he said, adding that “hundreds” of other senior officials – whose names were known to the investigators – were probably also culpable.

Nothing like stating the glaringly obvious. No ‘probably’ about it.

This is where Communism and tyranny lead – to gulags and dictators who have no pity, no conscience, no remorse… North Korea is an obvious killing field, but others are following down the same path. Kim Jong-un is giving the Nazis a run for their money. By allowing it to continue, we are guilty as well. But then again, Obama is lurching down the same Communist path to hell.

Update: These eight sketches are from TheBlaze. Remember well America, because we are heading down this path.

The sketches included in the report, which come by way of Kim Kwang-il, a North Korean who claims he spent six years in a prison camp, are similar to drawings released a short while ago by another escapee.

U.N. investigators were so shocked by what they found while documenting North Korea’s treatment of its citizens that they actually compared it to the Nazis during World War II, according to Reuters.

Here are eight of Kwang-il’s sketches accompanied by descriptions from the U.N. report: 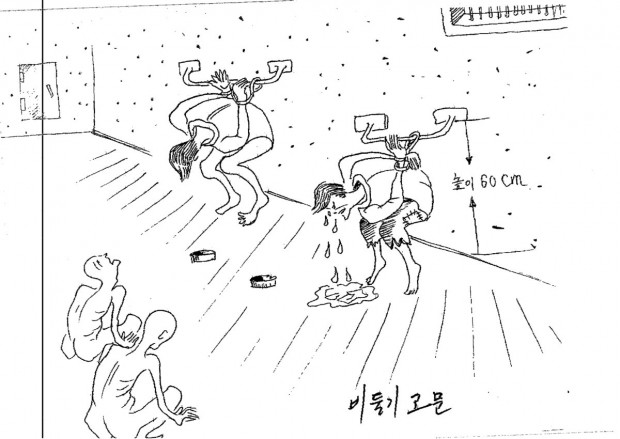 The “pigeon torture”: “[W]e are bound to stay in that position until the jailer feels that you have been tortured enough. So the torture goes on until the time has come to the satisfaction of the jailer. This is the pigeon torture. This is a very strange word in Korea and to you. Your hands are bound back and if they tie you like this, your chest comes out forward and in this position you are tortured.” (Image source: United Nations) 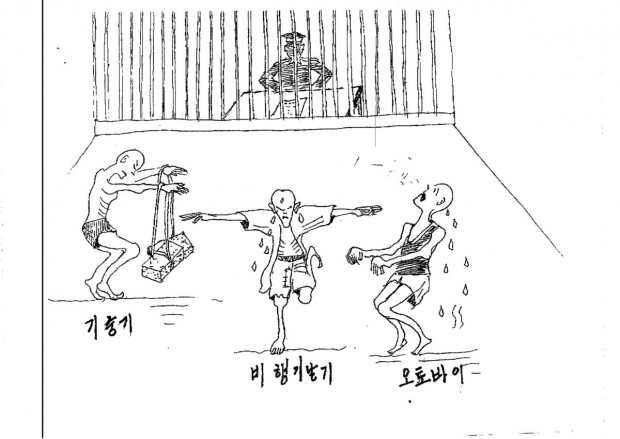 In Kim’s own word to the U.N. panel: “We are supposed to think there’s an imaginary motorcycle and we are supposed to be in this position as if we are riding the motorcycle. And for this, we pose as if we are airplanes ourselves. We are flying. And if we stand like this there’s no way that you can hold that position for a long time. You are bound to fall forward. Everybody in the detention centre goes through this kind of this torture.” (Image source: United Nations) 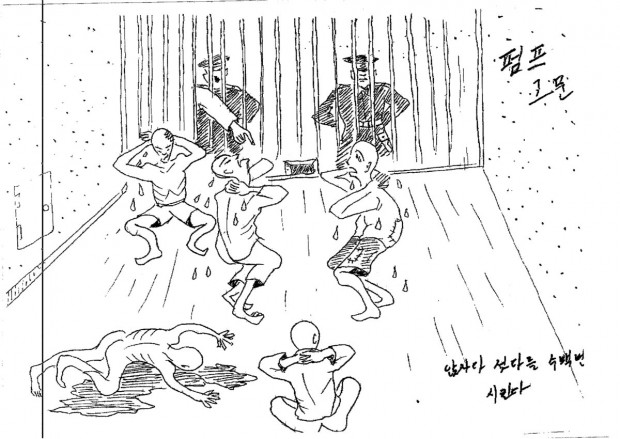 From the U.N. report: “[D]ecisions, actions and omissions by the State and its leadership caused the death of at least hundreds of thousands of people and inflicted permanent physical and psychological injuries on those who survived.” (Image source: United Nations) 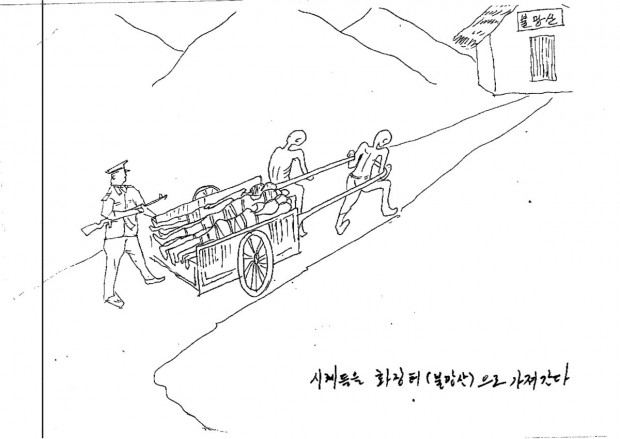 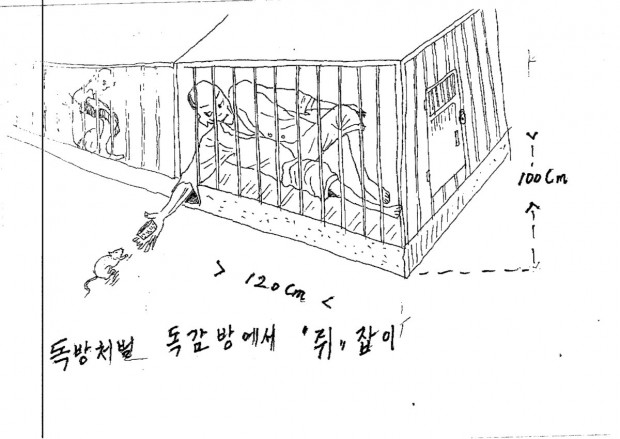 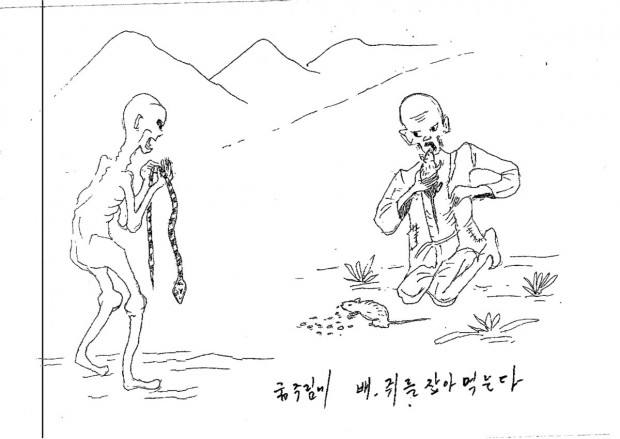 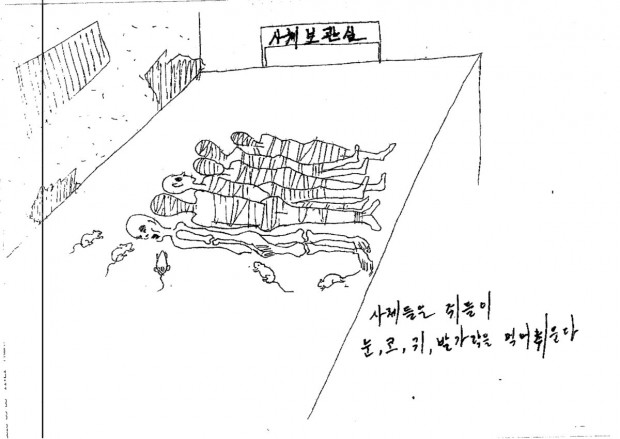 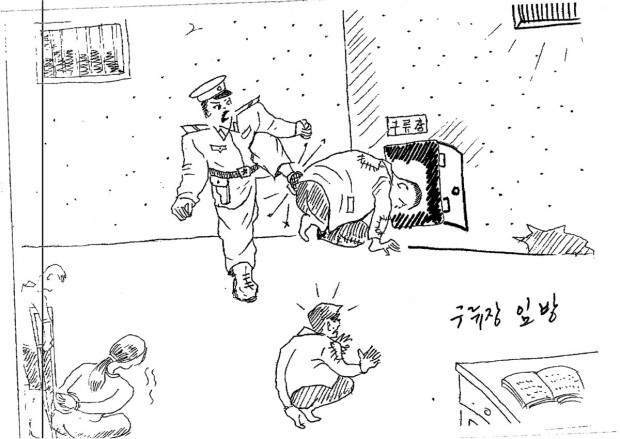 The full Human Rights Report from the United Nations: