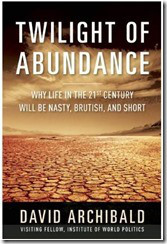 I have always believed the whole ‘global warming’ thing was a scam meant to exert control over the masses and line the pockets of the corrupt. I’ve been vindicated over and over again. Although the Progressive Marxists keep pushing their Earth agenda down our throats, people just aren’t that stupid. At least most people aren’t.

Temperatures and climate are natural cycles on this planet. Pollution is a problem in certain countries, but it is not causing a global shift in temperature. However, cycles on the Sun do and have caused global shifts in climate since the Earth was formed. The Sun has been relatively calm and quiet for some time, so of course, humans in their herd-like mentality, start to believe it has always been this way. Not so.

Although I don’t believe another ice age is imminent, the case can certainly be made that our winters have become colder in recent history and the ice shelves have been growing. Enter a fascinating book that I wanted to share with all of you: “Twilight Of Abundance,” — Why Life In The 21st Century Will Be Nasty, Brutish, And Short, by David Archibald. Mr. Archibald’s book has its origins in a lecture entitled “The Four Horsemen of the Apocalypse,” which was developed for the Institute of World Politics in Washington, DC. He is a Visiting Fellow there.

A brief synopsis: Baby boomers enjoyed the most benign period in human history: fifty years of relative peace, cheap energy, plentiful grain supply, and a warming climate due to the highest solar activity for 8,000 years. The party is over—prepare for the twilight of abundance.

Many of us worry about a solar flare taking out the power grid which would shove us back into the Dark Ages and prove fatal to untold numbers of Americans. But a change in solar activity is even more of a threat. I remember when I was young, we went through some brutal winters. If due to a catastrophe of nature or by man, we did not have an easy means of heat, winter would become a lethal enemy to humans, followed closely by starvation.

Mr. Archibald does not believe in Global Warming, but he does believe in global cooling. See an interview here at PJTV – he is a brilliant man and the questions he raises are ones that all of us have asked. I share his views on China and though there are dangers with nuclear power, I agree they can be overcome and it can be a safe, clean form of energy. That doesn’t include other forms of emerging energy technology on the horizon and I’m not talking about ‘green’ crap. I’m referring to the hydrogen theories out there and other scientific fronts that are just now beginning to appear.

I want to give you the overview from the cover of the book – it is very good and gives you a sense of what you will read and the truth that humanity will have to confront sooner than later. While I do not agree that oil is running out just yet – it won’t last forever. So take a peek:

A New Dark Age Is Coming

Energy shortages. Food riots. Nuclear wars. Mass starvation. The onset of the next Ice Age. Our future is suddenly looking much uglier. The twilight of abundance is upon us.

The second half of the twentieth century was a period of unexampled prosperity. The standoff between the superpowers gave us decades of peace. Oil was plentiful. The climate was warming, thanks to the highest level of solar activity in eight thousand years. Grain supply outpaced world population growth.

That spectacular good fortune will not last forever. The oil is running out. China wants a war. Millions of people across the world now depend on grain imports for their daily survival, and the agricultural boom is coming to an end. But the greatest danger is a cooler Sun. After the wholly beneficial warming of the twentieth century, our Sun is entering a cooler phase – and only the prepared will survive.

As climate researcher David Archibald, visiting fellow at the Institute of World Politics, points out, the Chinese are investing in viable non-oil energy sources and stocking up on foodstuffs while our politicians fritter away their time on the non-problem of global warming. If we want to keep our place as a superpower – or even survive with a standard of living comparable to the one we enjoy now – we had better start preparing ourselves.

In Twilight of Abundance you will learn:

There is hope, Archibald says. The twilight of abundance does not have to be the twilight of peace and prosperity in the developed world. America can develop new energy sources, plan for shorter growing periods, protect herself from global threats, and continue to lead the world. But only if we act now. Read Twilight of Abundance and be prepared.

Mr. Archibald is a very intelligent man who explored for oil for Exxon and worked as an analyst in the finance industry. His theories are very good and very compelling. We think along the same lines and his book is an excellent read. You should also read his post at American Thinker – it is sobering and pretty much dead on. Mr. Archibald has a strong faith in God, I believe and he certainly sees Socialism/Marxism for the evil ideologies they are. He also clearly sees the threat of China and the Islamic regimes heading towards us. I highly recommend this book and will probably read it a second and third time. Buy a copy today at Amazon.com – you are in for a great read.

2 thoughts on “Twilight Of Abundance – A Book Review”