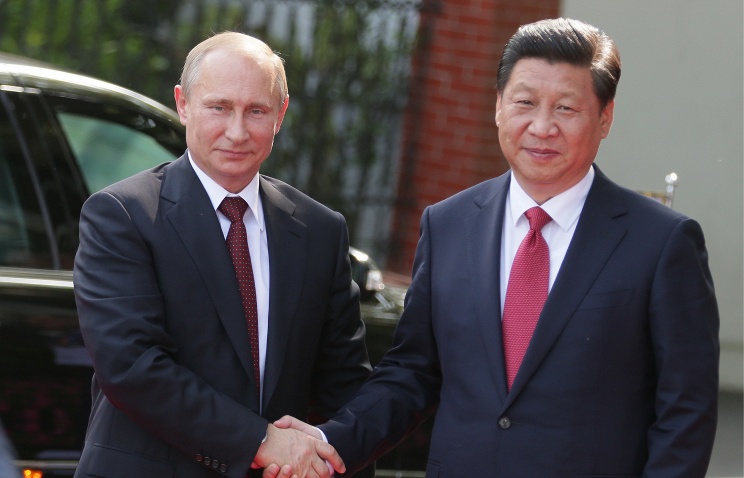 As Americans ponder gender issues, racism and collectivism… Russian battleships are in Shanghai for joint naval drills with the Chinese. The Russian anti-surface destroyer Bystry sailed into port ahead of the “Joint Sea-2014” naval drills, in Shanghai along with a host of other ships.

As a contingent of Russia’s Navy Pacific Fleet glided into the waters of Shanghai to participate in a show of solidarity with the Chinese military, no one seemed to notice or care that two super powers are joining forces in preparation for war and conquest. The Russian-Chinese naval training was dubbed ‘Joint Sea-2014.’ The military drills will take place in the northern part of the East China Sea. They start today and go thru May 26th.

The Russian contingent is composed of six battleships and support vessels which include the following: the flagship of the Pacific Fleet, the missile cruiser Varyag, the anti-submarine destroyer Admiral Panteleyev, the large landing ship Admiral Nevelskoy, the anti-surface destroyer Bystry, the tanker Ilim and the ocean tug Kalar. 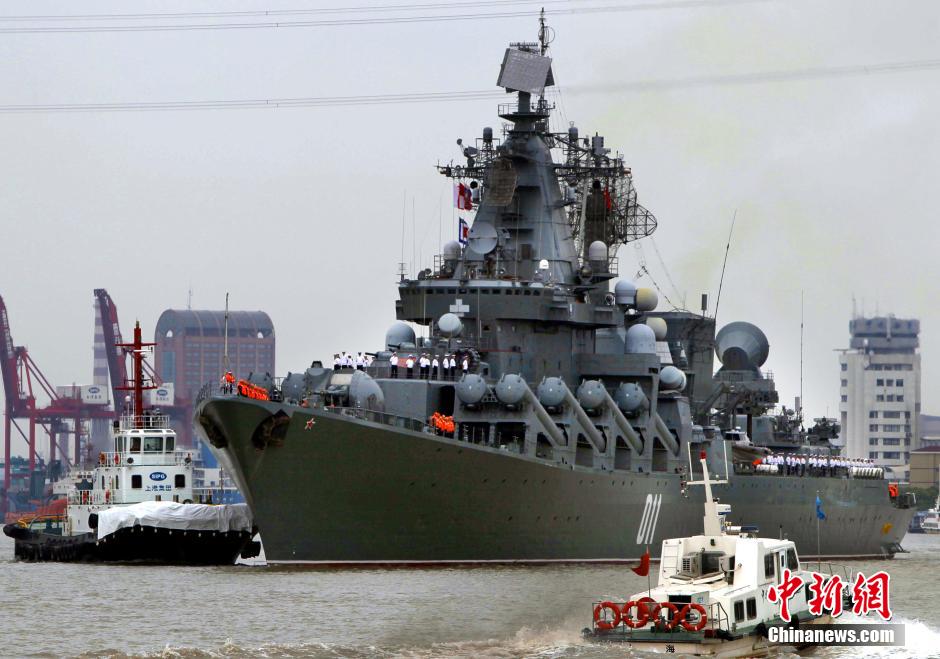 A Russian naval vessel arrives in Shanghai. It will join the Chinese navy in a joint military exercise to be staged in the waters and air space near Shanghai, in the East China Sea. (Xinhua)

The “Joint Sea” naval drills are being held for the third time. Last year, training took place in the Sea of Japan with about 20 ships taking part, during what was widely seen as Russia and China flexing their muscles amid the territorial dispute between China and a number of its neighbors, including the Philippines and Vietnam.

This year’s exercises hold particular importance for China, as they are taking place amid the persisting tensions between Tokyo and Beijing, not far from the disputed Senkaku Islands known as the Diaoyu Islands in China. Tensions are rising with countries taking sides, but it is obvious to the world and anyone paying attention that Russia and China have superior might and forces. A ‘red’ alliance has formed that could shake the world and topple governments, realigning world powers and eradicating freedom. It’s a Progressive/Marxist dream come true. Russia and China share a common enemy in the US and would love to rid the world of the United States. 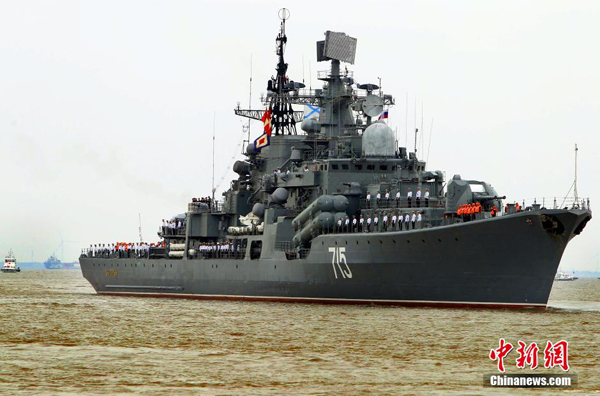 As the flags of Russia and China hung majestically and territorially together, sailors from both countries stood at attention and in solidarity for their tyrannical leaders. Their presence hails the drills that will take place between the two monoliths, where the Chinese will have six battleships doing maneuvers along side their Russian counterparts.

The drill will entail 14 ships, two submarines, nine warplanes, six shipboard helicopters and two operational detachments of marines from both sides. This will be done from the Usun naval military base in Shanghai. Notes and battle plans will be compared and brainstormed by both powers. I have no doubt that divvying up the geopolitical landscape of the planet will be discussed at length, while many laughs will be had over the United States, their leadership or lack thereof and their weakened stance on the world stage. 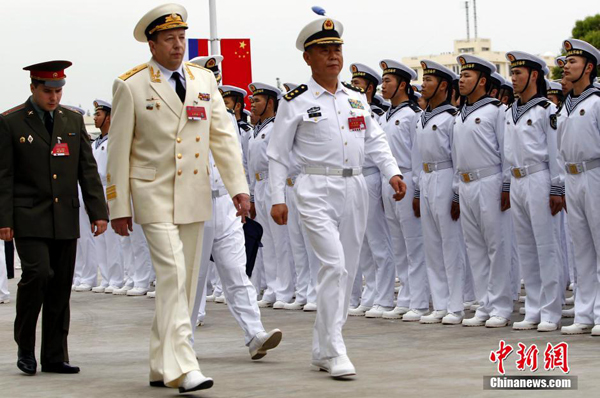 Chinese and Russian military forces have gathered in Shanghai ahead of a “Naval Interaction” drill in the East China Sea. (Xinhua)

This is the first time in history that Russian and Chinese sailors will work together on battleships in common drills. They will hold joint missile and artillery strikes against sea targets at different ranges and they will perform anti-submarine activities.

“Accumulated experience of interaction will allow us to increase the possibility of conducting joint actions of the two fleets to perform a wide range of tasks,” the top brass Chinese naval officer said. I bet and those tasks will have world dominance on the menu. You would think that these drills would have the US on heightened alert militarily, but no… our military seems to be too busy with gay rights currently. In the timeless words of Lady Gaga, their answer is: “I’m kinda busy…” They might want to watch Russia as they successfully test ICBMs with ‘Death to America’ potentially stamped on their casings:

Russia today carried out a successful test-launch of an intercontinental ballistic missile, news agencies reported citing the defence ministry, amid a standoff between Moscow and the West over Ukraine.

Interfax and ITAR-TASS quoted the defence ministry as saying a successful test of the RS-12M Topol ICBM had been carried out from Russia’s Kapustin Yar rocket launch site near the Caspian Sea at 2238 IST (1708 GMT).

The missile hit its target in the Sary Shagan ballistic missile test range that Russia leases in Kazakhstan, it said.

“The purpose of the launch was to test a prospective warhead of intercontinental ballistic missiles,” Interfax quoted defence ministry spokesman Igor Yegorov as saying, without providing further details.

Russia reportedly carried out previous tests in December and March of the RS-12M Topol, a road-mobile missile first put into service in the 1980s and then repeatedly modified.

It is referred to as the SS-25 Sickle by NATO and has a reported maximum range of 10,000 kilometres.

And military exercises are not the only thing the Russians and Chinese are conspiring on:

SHANGHAI, May 20 (RIA Novosti) – Russia and China are planning to increase the volume of direct payments in mutual trade in their national currencies, according to a joint statement on a new stage of comprehensive partnership and strategic cooperation signed during high-level talks in Shanghai on Tuesday.

“The sides intend to take new steps to increase the level and expansion of spheres of Russian-Chinese practical cooperation, in particular to establish close cooperation in the financial sphere, including an increase in direct payments in the Russian and Chinese national currencies in trade, investments and loan services,” the statement said.

The two countries are also set to deepen dialogue on macroeconomic policy issues, as well as boost growth in mutual investment, including in transportation infrastructure, the development of mineral deposits, and the construction of budget housing within Russia.

Russian President Vladimir Putin arrived in China on Tuesday for high-level talks with President of the People’s Republic of China Xi Jinping. A large package of documents, including bilateral, intergovernmental, inter-departmental and corporate agreements are expected to be signed during the two-day visit, aimed at cementing Russian-Chinese relations.

The decision to switch to the national currencies, thus reducing dependence on the US dollar was first announced in 2010 by then-Russian Prime Minister Vladimir Putin and Chinese Premier Wen Jiabao. The announcement was followed by a deal struck by the central banks of the two countries that allowed bilateral trade in the ruble and renminbi, as well as in freely convertible currency.

Military collaboration — check… Financial collaboration — check… Collaborative aggression and war pacts — check and double-check. It would appear these two Communist regimes are just not ‘into’ the US any more. I can’t help but think under any half decent Presidency, the US would now be on a war footing. Instead we are watching Pinky and the Brain plan on taking over the world, while an evil version of the Keystone Cops and the Three Stooges play at totalitarianism here in the States.

The menace of Russia and China forming a strategic alliance is growing. Let’s hope their rising red sun does not foretell of a coming red dawn.

More pics from the drills: 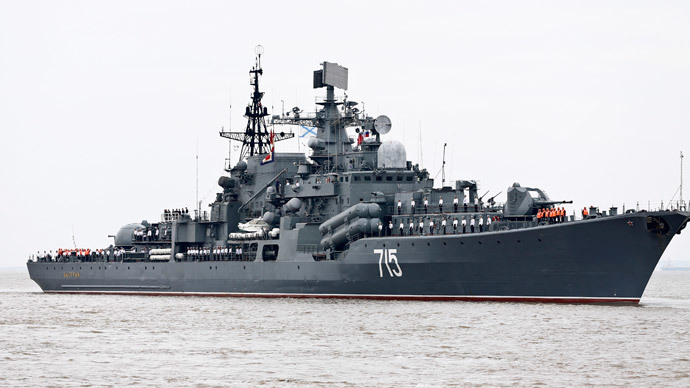 Russian anti-surface destroyer Bystry arrives at a port ahead of the “Joint Sea-2014” naval drill, in Shanghai, May 18, 2014.(Reuters / China Daily) 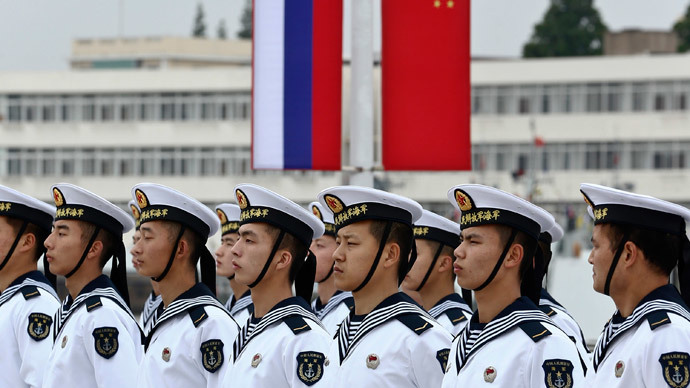 Chinese sailors stand in formation in front of national flags of Russia (L) and China, as they get ready for a welcoming ceremony for Russian naval vessels ahead of the “Joint Sea-2014” naval drill, at a port in Shanghai, May 18, 2014.(Reuters / China Daily) 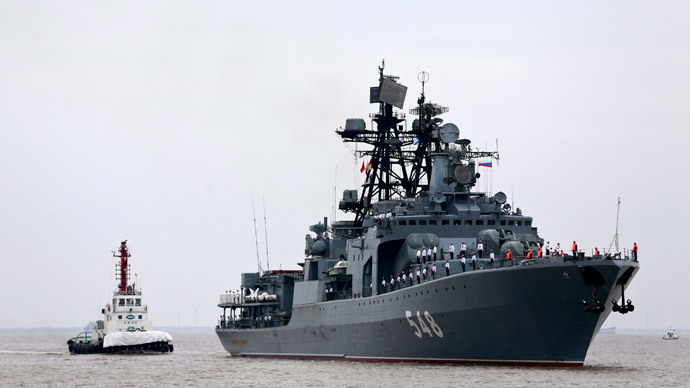 Russian anti-submarine destroyer Admiral Panteleyev (R) arrives at a port ahead of the “Joint Sea-2014” naval drill, in Shanghai, May 18, 2014.(Reuters / China Daily) 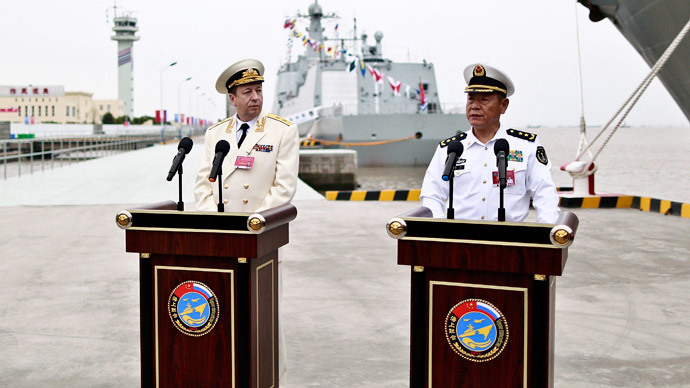 Tian Zhong (R), deputy commander of the Chinese Navy and Alexander Fedotenkov, deputy commander-in-chief of Russian Navy, attend a news conference as directors of the upcoming “Joint Sea-2014” naval drill, at a port in Shanghai, May 18, 2014.(Reuters / China Daily) 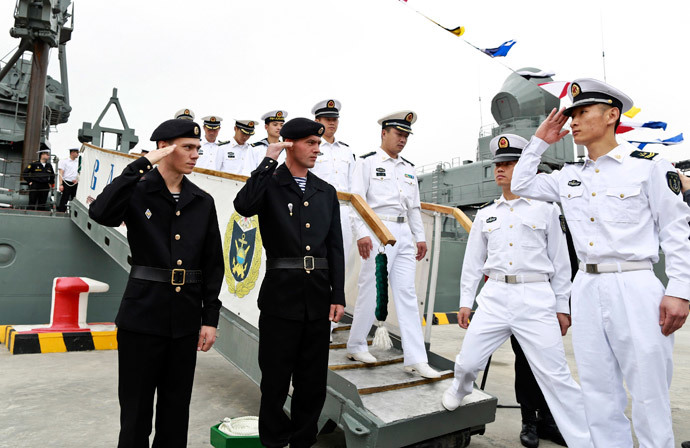 Russian sailors (L) salute to Chinese sailors as they visit Russian guided missile cruiser Varyag ahead of the “Joint Sea-2014” naval drill, at a port in Shanghai, May 19, 2014.(Reuters / China Daily)