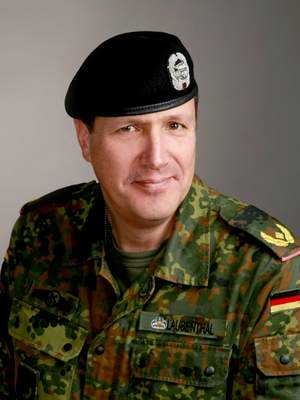 Gen. Markus Laubenthal is the first German officer to be assigned to US Army Europe. He is the command’s new chief of staff. (US Army Europe)

A headline blipped by this morning that I’m sure very few took note of, but it caught my attention big time. As Weasel Zippers astutely put it: “Nein, this could open the door for a UN blue beanie.” Indeed this does, because my friends, if they can put a foreign officer in charge of our troops there, what’s to stop them from doing it here?

From the Army Times:

A German Army brigadier general who recently served with NATO forces in Afghanistan is assuming duties as the chief of staff of U. S. Army Europe, the first time a non-American officer has held that position.

Brig. Gen. Markus Laubenthal, most recently the commander of Germany’s 12th Panzer Brigade in Amberg, and chief of staff of Regional Command North, International Security Assistance Force Afghanistan, will be stationed at USAREUR headquarters, Wiesbaden, Germany. He could report to duty as early as Monday.

As the major staff assistant to USAREUR commander Lt. Gen. Donald Campbell, Laubenthal will synchronize the command’s staff activities much as American predecessors have in the past.

“This is a bold and major step forward in USAREUR’s commitment to operating in a multinational environment with our German allies,” said Campbell.

“U. S. and German senior military leaders have been serving together in NATO’s International Security Assistance Force in Afghanistan for years. Sustaining the shared capability from this experience will benefit both the U. S. and German armies,” said Campbell who has headed the Army’s largest and oldest overseas command since 2012.

This is a first, a big one. Never before has a non-American officer held the position of Chief of Staff of US Army Europe. It boggles the mind. So, let me get this straight… we fire our generals, gut our officers and then place a German in charge? WTH? Does anyone else see a problem here?

And it gets better… you know why we did this? To say we are sorry for spying on Germany. I kid you not. All this crap leads back to Snowden. The Administration is saying this appointment is a rare sign of cooperation following recent spying allegations. Oh, you bet it is. This is a brilliant maneuver to subvert our military command and it happened without so much as an ‘excuse me’ or a ‘by my way’ being ushered:

BERLIN—A German will for the first time become chief of staff of the U.S. Army in Europe, a sign of further cooperation between the two nations despite a chill caused by allegations of U.S. spying here.

“This is a bold and major step forward in USAREUR’s commitment to operating in a multinational environment with our German allies,” Gen. Campbell said.

The appointment of a German to the position has been several months in the making and is part of the U.S. Army’s strategy to internationalize the command of its overseas operations.

What it is, is a blatant move to allow foreign command and troops eventually to come to American soil. Yep, I said it and Americans better take note. This is a very bad development. What? Didn’t see this coming when Snowden landed on the scene? I did. And Merkel has communist underpinnings in her history and a disturbing bond with Russia. So, tell me again how this helps our national security? The only thing it helps is bringing the UN and NATO into our military’s midst and forcing us into a one world collaboration.

You want fundamental transformation? Look at the ongoing invasion across our Southern border… Look at foreign officers in charge of our troops… Look at Obama’s behind the scenes ties to our enemies and you will discern that where we are heading is very bad indeed. Why are our military officials silent on this? You took an oath, time to honor it. Obama and the US Army just opened the door to the vampiric UN — America do you really want those asshats on your soil?