Motzei Shabbat (After Shabbat)
“What Is He Talking About?”
We have just completed the holiday of Sukkot, during which time we live in sukkahs.  While conforming to certain specifications, a sukkah is in its essence a temporary and thus fragile structure. 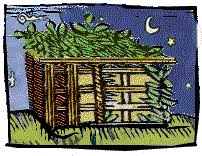 Credit: Mishpacha
This comes to remind us that what protects us is not the walls of the sukkah, but the embrace of the Almighty. And I believe that now, especially, this is a lesson we need to carry with us: As is obvious from my postings, I believe we are commanded to act as decisively as we can.  Never do I suggest that we should leave it to Heaven and stop exerting our own effort to protect Israel – on the contrary!
But in the end, we indeed must rely upon the embrace of the Almighty.  The world grows less comprehensible day by day.
~~~~~~~~~~
John Kerry’s statements serve as a perfect example of the incomprehensible nature of current events.  This past Thursday, he linked the lack of a “two-state solution” to rising Islamic radicalism:
“there wasn’t a leader I met with in the region who didn’t raise with me spontaneously the need to try to get peace between Israel and the Palestinians, because it was a cause of recruitment and of street anger and agitation…
“People need to understand the connection of that. And it has something to do with humiliation and denial and absence of dignity.”
http://www.israelnationalnews.com/News/News.aspx/186236#.VEK2DptxnIU
~~~~~~~~~~
This position is not only daft and outrageous, it is dead wrong and dangerous.
The vast majority of the Arabs across the region care very little about the “Palestinians” and their call for a state.
ISIS is about an Islamic caliphate established on the basis of sharia law.  Were there (Heaven forbid) no Israel, the Islamic radicals would still be seeking a caliphate.
More to the point with regard to the rise of ISIS is the withdrawal of US forces from Iraq at a premature time.
~~~~~~~~~~
UN Secretary-General Ban Ki Moon, who was in Gaza this past week, echoed a refrain similar to that of Kerry:
“The Gaza situation is a symptom of a larger problem: the stalemate in the Middle East peace process.”
http://www.jpost.com/Arab-Israeli-Conflict/UN-Chief-questions-proportionality-of-Gaza-war-379039
It doesn’t end.
One must ask what it is that Ban doesn’t get: Hamas in Gaza was not part of negotiations for “peace” and has declared it never will be.  The goal of this terror organization is the elimination of Israel and it would not be pacified by a “two-state solution.”  It would merely utilize the presence of a “Palestinian state” in Judea and Samaria to advance its opportunities for attacking Israel.
How has it come to pass that successful peace negotiations are touted as the panacea for everything that ails this part of the world?
From where I sit, it looks like a serious epidemic of “blame it on the Jews.”
~~~~~~~~~~
But here we are, with Kerry declaring:

“It is imperative that we find a way to get back to the negotiations.[We need] to find a way to create two states that can live together side by side, two peoples, with both of their aspirations being respected.”

http://www.abc.net.au/news/2014-10-17/imperative-to-resume-israel-palestinian-talks-kerry/5822102
~~~~~~~~~~
I confess, my friends, that I was naïve.  I believed that when Abbas signed with Hamas for a unity government it was the kiss of death for negotiations, at least for some interim of time.  I was convinced that it would be clear that Israel could not negotiate with an entity that encompassed a terrorist organization and that Abbas’s credentials as a “partner for peace” had been severely tarnished.
But, alas…I was wrong. We are expected to negotiate anyway.
We will not.
~~~~~~~~~~
From a purely pragmatic perspective I also saw Kerry as having too much on his plate to focus on the Israeli-Palestinian Arab conflict right now.  Go know…
~~~~~~~~~~
This past Sunday, a donor conference was held in Cairo to raise money for the rebuilding of Gaza.   A staggering $5.4 billion dollars was pledged, the largest pledge of $1 billion coming from the Hamas-supporting nation of Qatar.
Israel, the PA and the UN have ostensibly worked out a mechanism for ensuring that materials brought in will not be utilized by Hamas.  I have not quite figured out yet how this can be the case, when the PA encompasses Hamas.  Please, do not hold your collective breath expecting success on this score.  My understanding is that it will be impossible to effectively monitor dual-use items (that can be used for civilian building or for military purposes) once they are in Gaza.  This past Tuesday, cement and steel entered Gaza for the first time in a year.
Yuli Edelstein, speaker of the Knesset, expressed double concern about a lack of proper supervision of the funds donated: It will not reach the population that needs it, and it will embolden Hamas to more violence
Edelstein regretted that Israel had not been invited by Cairo to the conference.
~~~~~~~~~~
I call your attention in particular to a piece on this issue by Michael Freund, “Is rebuilding Gaza more important than halting Ebola?” (emphasis added):
“…despite the Islamic terrorist group’s [Hamas’s] cynical use of the area as a launching pad for thousands of rocket attacks against Israel, Western powers and others have rushed to open their checkbooks to help with reconstruction.
“This is morally obtuse, politically obscene and strategically oblivious behavior…
“…At the Gaza donor conference, which was held in Cairo, a whopping $5.4 billion was pledged, half of which will go towards rebuilding efforts, while the rest will be used to sustain the budget of the Palestinian Authority, which now includes Hamas through 2017.
“In other words, even though the Palestinians siphoned off previous aid and used it to prepare for war with Israel, they are once again becoming recipients of Western largesse.
“Needless to say, the funds pledged are not contingent on Hamas disarmament, nor will any demands be made of the terrorist group to cease building tunnels to try and burrow into Israel and murder innocent Israelis…
“The inanity at work here is even more pronounced when one considers that the United Nations has been having difficulty raising just $1 billion to fight Ebola.
“Although the disease has killed more than 4,000 people and spread to at least seven countries, UN Deputy Secretary-General Jan Eliasson said on Friday that just $250 million…has been raised thus far…
“And so, even though the number of Ebola cases is reportedly doubling every three to four weeks, billions of dollars will be lavished on Gaza rather than on the jeopardized populations of Liberia and Sierra Leone.
“Similarly, a recent donor conference in Washington aimed at combatting cholera in Haiti, which has killed more than 8,000 and infected 700,000 others, raised just $52.5 million out of the $400 million needed for the program’s first two years.
“And just last month, Ertharin Cousin, the head of the World Food Program, said that because of funding shortages, the organization has had to reduce food rations and distributions.
“’We’re going to need to cut rations to those people we’re supporting inside Syria, and to cut the size of the vouchers to those Syrians who are refugees outside Syria…’”
http://www.jpost.com/Opinion/Fundamentally-Freund-Is-rebuilding-Gaza-more-important-than-halting-Ebola-378797
Concludes Freund, “no reasonable moral calculus can justify prioritizing the reconstruction of Gaza apartment buildings over preventing an Ebola epidemic that threatens millions of people.”
~~~~~~~~~~
All this makes me long for the peace of the sukkah. But I’ll be here, with a great deal more to write about.
As I had recently written about Hezbollah, and increasing concerns about its intentions, I end with this article by Jonathan Spyer, who has considerable expertise on the issue:
The Nusra Front – a Sunni Jihadist group in Syria – “is demonstrating its ability to hit at [Shi’ite] Hezbollah across the border [from Syria into Lebanon] with increasing impunity.”  In the past, Hezbollah has tangled with weak Sunni elements inside of Lebanon, or with Syrian refugees located in Lebanon, but this is different.  Nusra is attacking Hezbollah positions; there are indications that the Syrian civil war is moving “irrevocably” into Lebanon.
http://www.jpost.com/landedpages/printarticle.aspx?id=379024
All of this must be followed closely because of the complex implications for Hezbollah’s motivation to hit Israel in the near future.  Hezbollah is facing new challenges.  On the one hand, it is distracted and under pressure.  But it is eager to justify itself to the Lebanese population, which has not been pleased with Hezbollah’s involvement in the Syrian civil war.
Donate to
NoisyRoom.net
Support American Values...
Donate to
NoisyRoom.net
Support American Values...