Credit: Flash 90/Miriam Alster
You can see her here, walking with quiet dignity in the face of screaming Arab women (one of whom was arrested for pushing her).
http://www.jpost.com/Arab-Israeli-Conflict/WATCH-Police-arrest-woman-for-pushing-Bayit-Yehudi-MK-Moalem-at-Temple-Mount-380624
Today MK Tzipi Hotovely (Likud) went up. 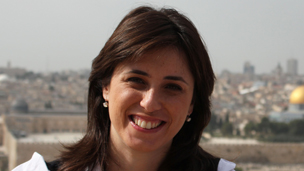 http://www.jpost.com/Arab-Israeli-Conflict/Hotovely-Response-to-Glick-shooting-must-be-Jewish-prayer-on-Temple-Mount-380729
Both MKs spoke of the obligation to go up as often as possible and to work to change the status quo, so that there will be Jewish prayer on the Mount.
~~~~~~~~~~
There have been other responses from nationalist and right wing MKs, as well.  Not all will be successful now, but we can be encouraged by a trend in certain directions.
One proposal would be to apply Israeli law to all Jews living in Judea and Samaria.  This would not change the status of Judea and Samaria.  It is not an annexation, but would rather be application of laws to people. Within 45 days after the Knesset passed a law, the IDF administration in Judea and Samaria would be required to put out an identical law for those Jews living in Judea and Samaria.
The legislation was proposed by Land of Israel Caucus chairs Yariv Levin (Likud) and Orit Struck (Habayit Hayehudi), and was cosponsored by coalition chairman Ze’ev Elkin (Likud), Bayit Yehudi faction chairwoman Ayelet Shaked, Shas faction chairman Avraham Michaeli, Knesset Law, Constitution and Justice Committee chairman David Rotem (Yisrael Beytenu) and UTJ faction chairman Menachem Eliezer Moses.
~~~~~~~~~~
Another law, which has passed, gives judges the latitude in serious cases such as terrorist attacks to stipulate on sentencing that the murderer cannot be released as part of diplomatic negotiations.  This applies to the future, and is not retroactive to those already in prison.  It however, delivers an important message.  As Naftali Bennett said:
it “brings back sanity and morality to Israeli policy about releasing terrorists, after years of losing the moral path.”
~~~~~~~~~~
Legislation is in process – an amendment to criminal law, actually – that would give maximum sentences of 20 years to those who throw rocks at moving vehicles.
Because so many of the trouble-makers and rock-throwers who must be dealt with are underage, there is another proposal that has been advanced as well: If underage youngsters are convicted of “nationalistic” crimes, their parents will have child allowances cut. The goal here is to get the parents to pay attention to what their kids are doing and assume responsibility. Don’t know that this will pass, but it does indicate a new seriousness about addressing the problem.
~~~~~~~~~~
There had been rumors that Kerry was about to unveil a “peace plan,” but Kerry now says this is not the case.  Even he, with his inability to grasp realities here, must see that there is nothing he could propose that would have even a snowball’s chance in hell of succeeding.  Count this as good news, as well.  Were a “plan” to be unveiled, incredible pressure would follow.
~~~~~~~~~~
What still looms before us is the diplomatic specter of various UN – and most notably Security Council – actions with regard to a “Palestinian state.”  While this is seriously troublesome, it is not as ominous as it sounds. For the UN cannot “declare” a state, no matter what the PA claims. I will return to this in more detail when and as necessary.
The major question here is whether Obama is prepared to so totally throw Israel under the bus that he would not veto such an effort.  No one knows the answer right now.
PLO official Saeb Erekat has asked Kerry to support “Palestine” in the UN.  What he is seeking is “a state based on the 1967 borders with East Jerusalem as its capital.”  But by definition a state must be in control of the territory that it is claiming, which makes this fairly nonsensical.  It would require a process far more complicated than simply having the UNSC “recognize” a state within these parameters.
~~~~~~~~~~
Speaking of the UN:
A plan for reconstruction of Gaza was announced some several weeks ago, with donor states subsequently pledging $5.4 billion.  The plan was called the “Serry” plan, after UN Special Coordinator for the Middle East Peace Process Robert Serry.  Needless to say, the plan called for the UN to be a partner in the process.
Now Abu Marzouk, deputy head of the Hamas politburo, claims that Hamas was never shown the Serry plan.  Hamas wants reconstruction to be handled exclusively the Palestinian Arabs.  Guess Hamas figures it can get a bigger piece of that $5.4 billion this way.
However…Robert Turner, head of UNRWA operations in Gaza, says that the “Palestinian unity government” is not organized and effectively in control in Gaza. (No surprise there.)  So-called “unity government” or not, Hamas and the PA are still at odds.
And so?
Donate to
NoisyRoom.net
Support American Values...
Donate to
NoisyRoom.net
Support American Values...