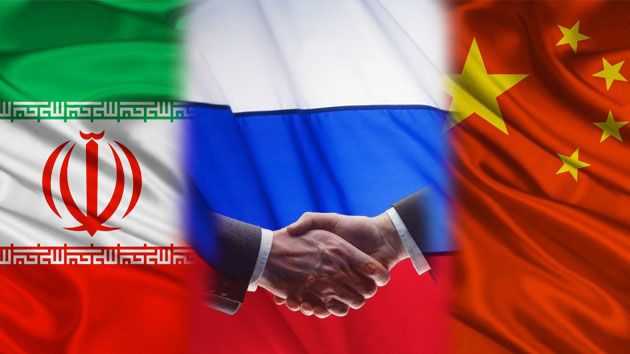 For years, we have warned about the solidifying new Axis of Evil between Russia, China and Iran. It is now fully formed and growing in strength. Already Russia and China’s militaries have grown arguably more powerful than ours if you consider their nuclear arsenals and Obama’s rigorous gutting of our military stockpiles and forces. The purge continues daily. All the while a military/security pact has flourished among the Axis of Evil players via the Shanghai Cooperation Organization.

Unlike the US, our enemies realize that the Cold War never ended… it shifted and put on a new face. We must confront the fact we are at war with these foes, because whether we recognize it or not, they certainly do. It won’t be long until they have formulated their strategies sufficiently enough and tested their capabilities thoroughly enough to ensure victory when they attack us full force and on multiple fronts.

While we have used diplomacy and have attempted to talk our enemies to death or to strangle them economically, said enemies have developed a whole cadre of unconventional warfare skills that include clandestine, strike forces, cyber, battlefield, drone/aerial, nuclear, space, economic, infiltration, information/data, legal, psychological, political, medical, propaganda, terrorism and media efforts. The US is stuck in viewing warfare as a one or two front venture, when in reality it is multifaceted and is a military hydra of immense possibilities. Where we are naive in this regard, unfortunately for us, our enemies are not. Our strategy to counter unconventional, information warfare threats from states and terrorists is wholly lacking.

To counter the threats that face us, we must think as our enemies do. Plan and strategize as they do. Take a look at the Chinese who have been waging unrestricted warfare strategies since the 1990s. While we dithered over political correctness, the Chinese have been conquering space; the Russians have taken over the Arctic; both own the oceans and skies, and both have been regularly attacking us via cyberspace as has been Iran. China is suspected in numerous power outages in the Eastern US. These are dry runs – tests, since the Russians and the Chinese have malware cozily nestled in all of our major infrastructure now just awaiting the right moment of activation.

The tools should include covert and clandestine special operations commando activities combined with political, intelligence, diplomatic, and financial warfare methods to counter the activities of states like Russia, China and Iran, and insurgent activities by terrorist groups such as the Islamic State.

Countering unconventional warfare also should be made “central to U.S./NATO security policy and practice over the next several decades,” the report states.

The Army study said the U.S. government “lacks a cohesive [information warfare] strategy to counter adversary [unconventional warfare] campaigns conducted by state and non-state actors, and this has hindered the U.S./NATO response to Russian aggression in Ukraine.”

“The U.S. government must develop a comprehensive framework to plan and execute regional and global IW strategies and operations that counter adversary UW campaigns as part of a whole-of-government approach,” the report said.

One wonders why the sole remaining Super Power on Earth would let their enemies so outpace them militarily. There is a very simple, brutal answer: we have an enemy from within as President. Obama wants us gutted as a military power so we will fall to our enemies. It’s as simple as that. Every action he has carried out screams it. The latest being getting rid of Hagel. Albeit, Hagel was a weak military agent, but at least in the end he had the nerve to say Obama was screwing things up. He paid the price for his honesty. Obama is sending weapons and supplies not to our allies, but to our enemies in the Middle East. The Pentagon and the military know that the Commander-in-Chief is sabotaging them. Oh, yes they do. There is severe conflict in the military ranks and it will get worse and may come to the breaking point.

While Islamic threats are incredibly dangerous and horribly barbaric in their bloody Caliphate building across the Middle East, the bigger threat is Russia and China. If Obama wanted to, he could decimate ISIS militarily, but you won’t see him do that because they serve his agenda. He is using ISIS as a distraction to justify other maneuvers, such as forming an alliance with a nuclear Iran and further weakening us. It’s been planned all along. And Obama’s agenda serves Russia and China. We are watching bloody Kabuki Theater in the military arena. Nothing is as it seems and we are being played.

“The brazen audacity of unconventional warfare within Russian hybrid warfare has produced urgent concern among America’s NATO and non-NATO partners that Russia may apply similar approaches to other regional countries in the region with dissenting Russophile populations, such as the Baltic States, Moldova, and Georgia,” the report adds.

According to the report, Russia is using special operations forces, intelligence agents, political provocateurs, and news media reporters, as well as transnational criminal elements in eastern and southern Ukraine.

“Funded by the Kremlin and operating with differing degrees of deniability or even acknowledgement, the Russian government uses ‘little green men’ for classic [unconventional warfare] objectives,” the report says.

The objectives of Russian covert warfare include “causing chaos and disrupting civil order” and provoking an excessive reaction from Ukrainian security organs that Moscow hopes will delegitimize the Kiev government.

The Russians have engaged in a successful unconventional warfare campaign against Ukraine by organizing pro-Russian separatists and dispatching advisers and fighters from Russian special forces and intelligence units to assist them. Activities include funding and arming, tactical coordination, and fire support for separatist military operations.

“Our enemies are conducting unconventional warfare and political warfare: Russia and its new Generation Warfare, Iran and its Iranian Action Network, and the Chinese Three Warfares,” Maxwell said in an email to the Washington Free Beacon.

Maxwell told a U.S. Special Operations Command briefing in July that counter unconventional warfare, or U-CW in Army parlance, can prevent states and groups from achieving their strategic aims.

Counter programs against unconventional war are likely to be “protracted and psychological-centric in nature,” Maxwell told SOCOM and added that the United States should “comprehensively employ political, economic, military, and psychological pressure” to degrade both the will and capability of enemies to use the new form of warfare.

The US must resume political warfare that was utilized before the end of the Cold War. Time to get our spies and operatives ready to go again. It’s a new, ruthless game out there and we are way behind.

We need to use special forces such as SEAL teams and the Green Berets for targeted assassinations and surgical strikes. They are among the most deadly players on the planet – let’s use their special talents to our full advantage. It is a game of war we dare not lose. Set loose the dogs of war and play to win.

I would caution America to get with it and to realize just how big an enemy both Russia and China are. The Chinese are incredibly brilliant strategists and can be ruthless and absolutely cold-blooded.

China’s use of unconventional warfare was described in the Army report as based on the 1999 book by two Chinese colonels called Unrestricted Warfare that calls for using all means to defeat enemies, including cyber attacks, ecological warfare, financial warfare, and terrorism.

Examples include China’s threat several years ago to sell off large U.S. debt holdings to protest U.S. arms sales to Taiwan, and cutting off sales of rare earth minerals to Japan in a dispute over the Senkaku Islands in the East China Sea.

Chinese news outlets also are used in media warfare, including at the White House. “The Chinese state-controlled television station network CCTV has a White House pool reporter that could influence U.S. media reporting on China issues,” the report said.

Cyber attacks also are a key Chinese unconventional warfare tool and the report said Chinese hackers are suspected of causing power outages in the northeastern United States and Florida, the report said.

“China’s cyber-attacks clearly show the vulnerabilities to the U.S. public and private sectors information and infrastructure security,” the report said. “States like Russia and China will continue to exploit weaknesses in cyberspace to gather information and influence others.”

Iran’s strong point is terrorism and the funding of such across the planet, especially Hezbollah. But they also use HAMAS, the Palestinian Islamic Jihad, the Taliban and Iraqi Shia groups. The Islamic Revolutionary Guards Corps Qods Force is infamous for their military prowess and the willingness to be brutal as needed. In Iraq, they target dams, power plants and pipelines. In 2012, Iran was responsible for cyber attacks on US banks that produced “debilitating” effects. Iranian hackers also infiltrated Navy and Marine Corps computer networks and they are backing the Syrian Electronic Army cyber group.

Obama wants an alliance with Iran and is angling for them to go fully nuclear – he is in bed with the enemy – via Trevor Loudon:

Here is the bait which will be used to lure the American public onto a viciously barbed hook.

Michael Ledeen maintains that Obama has wanted an alliance with Iran since the beginning of his first term of office. Obama would know that it would take something pretty dramatic to get the American public to swallow such a repugnant policy reversal.

To accept Iran, the public would have to be conditioned to fear something even worse.

It is known that Obama knew about ISIS for months and did nothing until they gathered so much strength and committed so many atrocities that he could no longer ignore them.

Now with horrific mass killings and brutal filmed beheadings, much of the American public believes that a ragtag army of Islamist extremists is public enemy number one. Not to diminish the threat from ISIS in any way, but what about Russia and its 8,500 nukes, China with its rapidly growing political, economic and military power, and an almost nuclear capable Iran? The focus is now all on ISIS – a threat that the president was at least negligent in allowing to grow.

Did the President deliberately allow ISIS to get out of hand in order to gull the American public into accepting an alliance with their former sworn enemy, Iran?

Is Obama deliberately exploiting the “Isis Crisis” in order to create the unholiest of unholy alliances?

Was ISIS allowed to grow unchecked, so that Obama could hold out his hand in friendship to a sworn enemy of liberty and American values? To a nation that still plans to annihilate America’s only real real friend in the Middle East, Israel?

I suspect that President Obama does not plan to let the “Isis Crisis” go to waste.

The US needs to have leaders that lead, who aren’t craven cowards and who aren’t afraid of offending someone. They need those that act decisively on their own, while at the same time are part of a strong military command. If killing and destruction are called for, do it and don’t look back. Don’t clean up the mess, leave that to our enemies. It sends a message and projects strength. We win and go home. The new Axis of Evil is waging unconventional warfare against us and we better wake up to the fact we are in a world war before we wind up permanently crippled or dead as a nation. War is unforgiving and so are our enemies – strategize, plan and execute before our enemies do.

16 thoughts on “The New Axis of Evil Waging Unconventional Warfare”