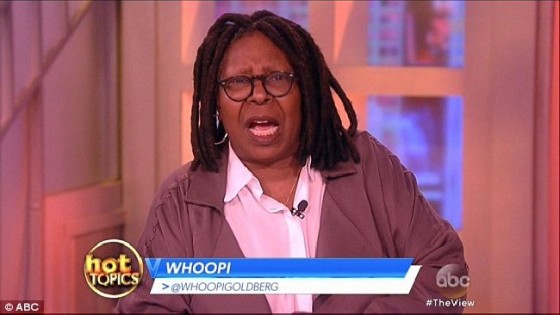 On the heels of Whoopi Goldberg’s maligning statement that “Hitler was Christian” comes the New York Daily News‘ attention baiting front cover that “God Isn’t Fixing This” in regard to the mass murders by two alleged terrorists in San Bernardino, CA. The Daily News‘ headline was quick to take aim at America’s Second Amendment gun rights and people of faith. Both liberal media outlets suggest that the rights of Americans to protect themselves must now be changed or suppressed based on the acts of terrorists and murderers. Both impugn Christians or Conservatives as a base cause for either past violence against Germany’s Jews or for today’s violence that is erupting from a terrorist arm of Islam. What Goldberg and the Daily News have in common is the targeting of Christianity.

For the Daily News, it is surreptitious hate speech disguised as a headline. Pushing the propaganda against Christians further and like so many trapped in their own illogical thinking without knowing the facts, ABC Talk Show Host Whoopi Goldberg contorts both truth and history. Ironically, Goldberg’s comments have historical bearing as they pose a threat to Christians worldwide. It is a threat that must not be dismissed.

In regard to the talk show’s on-air debate over Syrian refugees and who should be allowed in, Muslims or Christians, Goldberg let it rip: “There have been a lot of horrifying — there have been a lot of monster Christians. Hitler was a Christian.” In a deepened display of her ignorance of what it means to be Christian, Ms. Goldberg declared: “Well, he didn’t like the Catholics, remember? So, he thought of himself as a Christian person.” Break down her statements and you get: Monster equals Christians equals Hitler. The question is: What is her intent?

Is Ms. Goldberg practicing “hate speech” while she sits comfortably in the lap of an ABC Entertainment talk show as she both denigrates and targets Christians? By doing so, Ms. Goldberg displays similar traits to Hitler. Does this escape her? Ms. Goldberg’s right to free speech is tantamount. Even so, her “Hitlerizing” of the followers of Christ recalls the same insidious propaganda verbalized by Hitler that first vilified then led to the persecution and slaughter of the Jews. Is that Ms. Goldberg’s intention? Are we to conclude that Ms. Goldberg represents the same mind-set as Hitler with her deception and targeting. What are Ms. Goldberg’s motives to subject God-loving Christians to such a negative and damning association?

Such rhetoric by Goldberg feeds into the game plan of the terrorist who want to destroy all, especially Christians and Jews. Being broadcast within her incendiary and pointed denigrations of people of the Christian faith are the deep seeds of oppression that were at the core of Hitler’s massive propaganda machine. Hitler targeted the Jews. Goldberg lays bare a malintent of “hate speech” towards Christians. But, let’s be fair. Is it simply that on her day’s off she clearly has not thought it through?

The facts: Hitler’s mother did profess Catholicism. As an adult there is no evidence that Hitler was committed to any faith. Hitler was a great deceiver. He used religious language in speeches to gain political support. It is not an uncommon tactic in modern day politics. In the defense of the truth, Hitler was not a Christian. Hitler persecuted and killed Christians and their pastors.

The great German Christian Theologian and anti-Hitler dissident, Dietrich Bonhoeffer, would have had to disagree with Ms. Goldberg’s errant history lesson from behind the cold bars of one of Hitler’s prisons. As one of Germany’s foremost Christians, Bonhoeffer was eventually hung in a Nazi concentration camp. Hitler jailed, tortured, and killed other German pastors alongside Christians whom Hitler viewed as enemies opposed to his agenda to annihilate Germany’s Jews. Pastor Bonhoeffer’s writings detail Hitler’s hatred for Biblical Christianity.

Evidence abounds that Hitler was not a Christian. The following modified excerpt from the article: “Christian Purge — The Hitler Factor” is an open history lesson, a gift of knowledge.

“Hitler allowed religions. Early in his political career, he praised Catholicism. Initially, he also was favorably inclined towards Christianity. In time as he garnered power, Hitler came to find Christianity particularly troublesome when Christian pastors spoke out against his systematic annihilation of Germany’s Jews. Hitler set out to wash the veneer of Christian beliefs from German society. He sought a new religion. Hitler’s Reich Church would spring from the Nazi party with the pagan ‘crooked cross’ of the Swastika (to replace the Christian Cross) as its symbol in Germany’s New World Order.

Hitler had created the National Socialist German Workers Party (Nazis) and surrounded himself with men who were atheists or occultists who shared the desire to replace Christianity with a religion that did not require conscience. Men like Hitler’s Deputy Chancellor of the Reich, Rudolph Hess, and Heinrich Himmler, who oversaw the Nazi death camps, were occultists. Himmler stated a preference for the faith of anti-Semitic Muslims who were willing to die for the German cause to attain a reward in their heaven. German school children were indoctrinated to sing praise songs, “Hitler is our Savior, Hitler is our Lord.” Hitler made his memoir, Mein Kampf, the official bible of Nazism.

It was early in his political career that Hitler allowed a favorable view of Christianity. Historians reveal that, in time, power turned him inward to self-worship that perpetuated a growing alienation resulting in the imprisonment and death of Christians. Nazi Germany stands as a warning to all societies that look the other way or tolerate a denunciation or assault on Christianity and Judaism by their political leaders.” (For the full article click here.)

If Ms. Goldberg has not repented of her sins, nor believes in Jesus Christ as her Savior who died for her sins on the Cross, then she has no idea what or who a Christian is. Knowing that Hitler’s pedigree is pure evil, one must question her intent. Based on her statements, today the direct connection that Hitler has to Christianity is Whoopi Goldberg.

Such hostility towards Christians and Christianity may gain Whoopi Goldberg favor with the White House, but not with the majority of Americans who consider themselves Christians. Chiming in, The View’s co-host Joy Behar reportedly seemed to imply that Syrian Christians, fleeing genocide, may be as dangerous as any terrorist based on her misconception that Oklahoma bomber Tim McVeigh was a Christian. No, Ms. Behar, Oklahoma bomber McVeigh was not Christian. He was reportedly an agnostic who hated the Federal Government.

The View’s and Ms. Goldberg’s ignorance is dangerous during these time of turmoil as terrorists seek the deaths of all Christians. Will she or ABC come to understand that words have meaning and impact? Will ABC ask Ms. Goldberg to apologize on-air for her gross libeling of the people of Jesus Christ, or will ABC become known as the network of Anything But Christian?

It is odd that ABC’s The View goes from mocking America’s nursing profession in a public relations fiasco one month to denigrating Christians and then calls itself “entertainment.” Goldberg should be grateful for a nation grounded in Christianity. If ever confronted with the choice of facing a Christian or a terrorist — whatever is a liberal talk show host to do? Note to Ms. Goldberg, real monsters use the veil of Christianity for purposes of evil. They are not Christian. Hitler was once quoted as privately saying in 1933, “You can be a German or a Christian, but you can’t be both.” A quick theology lesson: You can either be a monster or a Christian, but you can’t be both. Hitler was a monster. It is the folly of ignorance in which Goldberg is engaged. Christians will pray for Whoopi Goldberg. Hitler would not. Terrorists will not.

Whether hate speech or hateful, Ms. Goldberg speaks a stigmatizing verbal violence at a time when Christians are being slaughtered in parts of the globe. It is reminiscent of Hitler’s seeding of libelous propaganda against the Jews. On a television show with global reach, Ms. Goldberg appears to reveal a prejudice and a bigotry. That ABC enables it is dangerous.

Sharon Sebastian, author of the book, “AGING: WARNING– Navigating Life’s Medical, Mental & Financial Minefields” (here), is a columnist, commentator, and contributor in print and on nationwide broadcasts on topics ranging from healthcare, culture, religion, and politics to domestic and global policy. Sebastian’s political and cultural analyses are published nationally and internationally. Website: www.AgingWarning.com