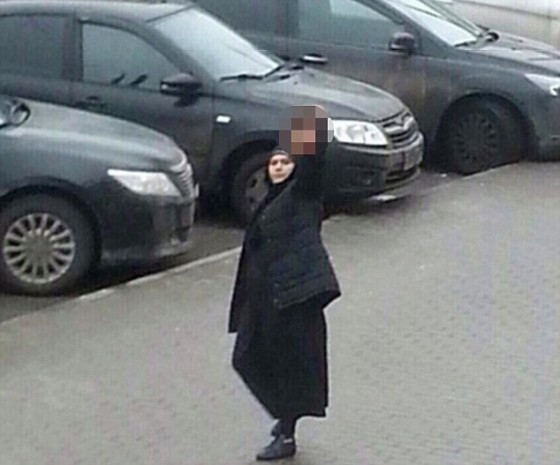 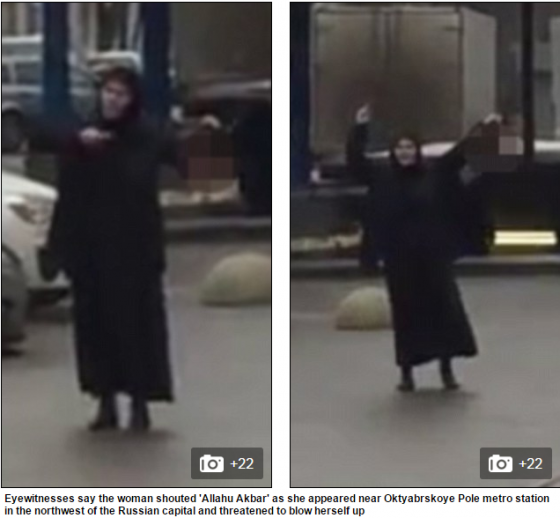 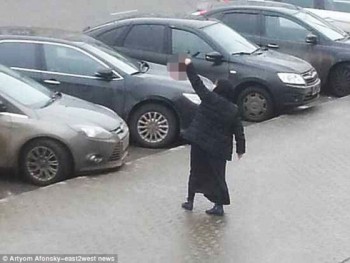 The killer nanny is 38. Yesterday, she made the headlines when she brandished the head of little Nastya Meshcheryakova for an hour before she was detained by police. The FSB took the nanny into custody and are interrogating her. I wonder why they didn’t just shoot the woman and end it? Maybe they thought she had intel.

The mother of the little girl was so distraught she passed out and had to be taken to the hospital. The nanny was in the country legally, but was working illegally as a nanny. Why they hired her in the first place is beyond me. The hijab should have been a big ole black flag. The nanny has three children of her own.

The killer nanny led the FSB to where she murdered the child. She claimed she set the fire to let the child’s parents know it was her that killed their baby. It wasn’t to destroy evidence. Who knows? It turns out she strangled the child before she beheaded her. As I said before, the child had learning difficulties and could not walk. She was born that way. Her parents had spent everything they had to get her medical help and were saving to take her to another doctor. The nanny used a kitchen knife on the child. 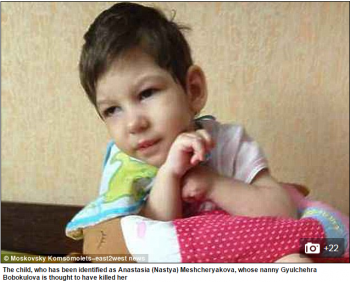 We are now learning that the nanny was married for 12 years and just recently divorced in Uzbekistan. Her interrogation was confused and incoherent they say. After the marriage she was ‘kicked into the street’, it was claimed, with her three children all going to different relatives in the Samarkand region of Uzbekistan. She hooked up with another man a year ago and agreed to be his ‘second, unofficial wife’, but four months ago he returned to his home country and she has not seen him since. Such is the way of Islam for women. It sounds to me as though this jilted woman stewed in resentment and hate until she just finally came unglued.

The FSB is now interrogating this woman’s family and people connected to her. It appears to me they think it was terrorism and are grilling everyone involved. You really don’t want to be on the end of an interrogation with Putin’s FSB. Just sayin’. They have rounded up her parents and husband for questioning. They’ve been interrogated now for at least two days. It is being said that her family is shocked by the cruelty of the murder, but not surprised. They say she was strange, but I wonder. Perhaps that is behind most of this, but obviously religious doctrine played into it. We see these scenarios played out over and over again. The common theme? Islam and a blind devotion to Allah. 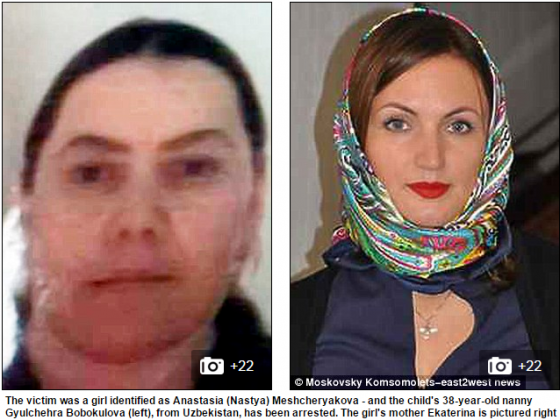 You would think if the woman was that unstable, these parents would have seen it and gotten rid of her. She was very good at hiding her hate. She would have also faced a medical commission in Russia and would have had to fool them as well.

They now say that her husband divorced her because she was unstable in 2002. I can’t shake the feeling that this woman is being painted the way she is because the FSB has seen to it. 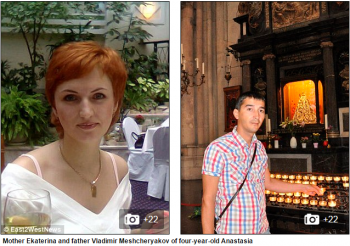 No explosives were found on the woman. Just the head of a child that was dripping blood on her skirt and shoes. She has made a full confession. The police said at first she just seemed nuts, but then agreed to the investigation. She was brought to the apartment where the murder was committed. She pointed to the block, the entrance and the apartment by herself. She seemed lucid and fully cognizant of what she had done. She entered the block with officers who escorted her to the fifth floor flat where she lived with the Meshcheryakov family whose daughter was killed. A police source claimed she said: ‘I came here and took off my skirt, threw it in a rubbish bin. Got changed into what we wear to have prayer. A voice told me to wear so.’ As she came out a woman in the crowd shouted: ‘You killed a child! Your head needs to be torn off!’ Police tried to calm the woman as Bobokulova was bundled into a police van. Sorry… I agree with the woman in the crowd. Off with the monster’s head.

This demon had almost become a member of the child’s family. She took care of her all day while the mother and father worked. After losing her boyfriend, she started spending more and more time on the Internet. Then came the extended prayer sessions and the centralized prayer rug. The parents of the little girl were in fact considering letting the nanny go when this happened. Guess they waited just a little too long. The nanny suddenly became very devout and obviously radicalized. Evil called her name and she was more than willing to answer and act on it. The nanny ‘cared for her like her own child’, according to one source. 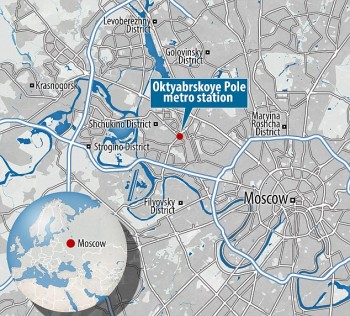 The Kremlin and media have decided not to show gruesome pictures of the crime scene. I agree with that move.

The nanny had taken care of the little girl most of her life. They say that the nanny did not normally wear a hijab. The parents thought the woman loved the child as if she were her own.

After she committed the heinous act, she headed to the metro station. According to local media, Bobokulova shouted in the street: “I hate democracy. I am a terrorist. I want you dead. You have become so hardened, you have eliminated so many of us. Look I am a suicide bomber, I will die, doomsday will come in a second.” She pulled the severed head out of a bag and walked near the metro station entrance in northwest Moscow.

Alexandra Shuvalova, a student from the capital, relayed her eyewitness account: “When I got close to the metro, I saw a woman running along the street. I could see that she had hair in her hands or something like that. She was waving this thing and screaming something and drawing some shapes in the air. This woman either had a birthmark or a wart on her right cheek. It was a distinctive feature because she was dressed in entirely in black. I realized it wasn’t a wig as I thought initially, but a head – that’s why blood was dripping on her shoes and skirt. I stopped, had a cigarette, tried to get my breath back to normal because I was so shocked.” A cigarette? Seriously? She also claimed that two police officers and a security guard missed a chance to detain the woman. 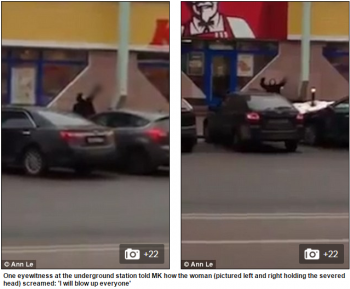 People were terrified and would not approach the woman. At least five and probably more, ran away from her. Many were in denial and could not believe what they were seeing. One of the security guards who saw her ran to tell someone else. The woman went on to say: “I heard her yelling ‘Allah Akbar’ at least three times. And hitting herself on her chest. She was yelling something in her language. She ran to a cafe and started shouting: ‘It’s all you! All you!” She was evidently carrying the head in a red bag.

I love how the authorities keep insisting there is no terrorism connection. They say she is from Central Asia instead of a Muslim country. In fact, the media does not mention much at all about the woman being a Muslim, just that she was deranged. Russia’s children’s ombudsman, Pavel Astakhov, called the crime “monstrous and inexplicable” in comments on Twitter and urged all parents to demand medical information from babysitters in the future, saying they should “get a certificate from a psychiatrist” proving the candidate is sane before hiring them. True, but they might also find out if they are a radicalized devout Islamist. Which is not politically correct and would be deemed racist, but nevertheless… 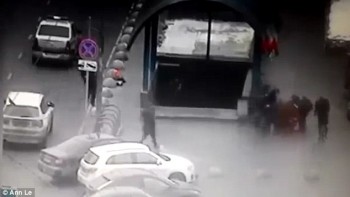 This is just another incident in a long line of atrocities committed by the Religion of Peace. Putin has his hands full with the Chechens, even though many fight for him. This seemingly innocuous event could light a fuse that sets off a much bigger confrontation in Russia. Rumors are swirling that the Muslims in Russia are restless and getting ready to rumble once again. We’ll see. The leader of the military arm of ISIS is half-Chechen after all.

The world should look for more of these incidents as the Caliphate spreads it’s malevolent wings further and further. The death of many innocents will follow. I might remind everyone that the US is not immune to these barbaric incidents either and our government is also quick to not call it terrorism. Taking that baby’s life the way this woman did goes far beyond mere psychosis and straight into theocratic dogma. It is sheer Jihadist evil. 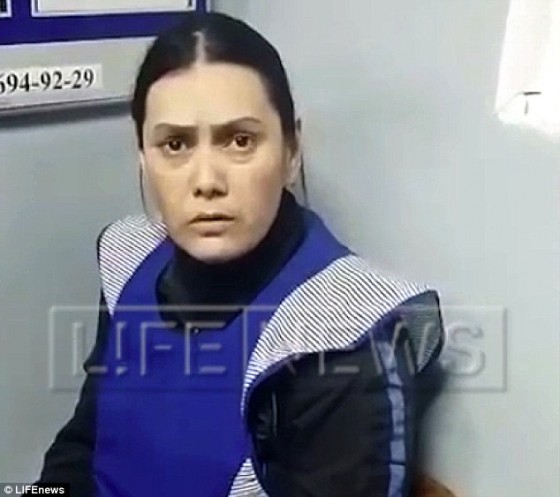