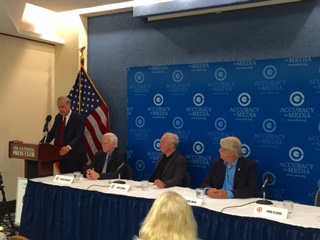 Accuracy in Media (AIM) recently held a press conference highlighting Jack Cashill’s latest book, TWA 800: The Crash, the Cover-Up, and the Conspiracy. The July 7th press conference received virtually no news media coverage, a continuation of the complicit media’s role in covering up the truth behind this tragic plane crash in 1996.

Cashill has broken new ground in this outstanding, recently released book. He cites the role of Jamie Gorelick, a former deputy attorney general appointed in 1994 by then-President Bill Clinton, who was the author of “the wall” that former CIA Director George Tenet described in 2004 to the 9/11 commission. That “wall” kept the CIA and FBI from sharing information in the run-up to September 11. Cashill wrote that “a newly unearthed treasure trove of CIA documents proves beyond argument, under Gorelick’s watchful gaze the CIA and FBI worked hand in glove to subvert the TWA 800 investigation.”

I also recently wrote about the TWA 800 crash for the American Thinker, detailing how Accuracy in Media’s investigation helped to expose the government cover-up, and how an AIM documentary demonstrated that the plane could not have simply exploded. We long ago concluded that the plane had to have been brought down by a missile or missiles.

Cashill, an outstanding investigative journalist, credits AIM for opening doors for him that he “could not have opened” himself, and for freely sharing its research. He also argues that TWA Flight 800 did not crash due to mechanical error, but instead due to missiles launched by nearby naval assets. Cashill noted at the press conference that “the FBI finally admitted that there were three submarines and a cruiser in the immediate—[those are] FBI words—in the immediate vicinity of the crash site.”

Although the 20th anniversary of the TWA 800 plane crash is this weekend, July 17th, even the few media organizations that have reported on Cashill’s book have chosen to obscure some key facts and cast him as a conspiracy theorist.

“While Cashill rehashes old conspiracy theories—a US Navy ship, which was in fact in the area, conducted a wartime exercise gone awry, or a terrorist on the ground used a shoulder-mounted surface-to-air missile, or a small plane collided with the 747, or a terrorist smuggled a bomb on board—it’s telling that, 20 years later, these theories still find traction,” writes Maureen Callahan for The New York Post. Similarly, the UK Daily Mailreports that Cashill’s book “takes a look at some of the alternate theories” and relegates the terrorist and naval exercise theories to “conspiracy theorists” and calls these “claims … declared untrue by the FBI a little over a year after the crash.” But at least these two articles reported on the various theories and some of the supporting evidence.

“The phrase ‘conspiracy theorist’ today is the word that we used to use for reporter a generation ago,” said Cashill at the press conference. “But right now they can just dismiss me as a conspiracy theorist, a nut job, a loose cannon. And that affects also the respectable conservative media: Weekly Standard, National Review. They don’t want to talk about this.”

Cashill was joined by other interested parties including John Clarke, the attorney for the key legal case proving a government cover-up; Mike Wire, an eyewitness to the explosion whoseaccount was said to be the basis for the CIA-produced animation of the event; and former NTSB member Vernon Grose, who talked about how his mind was changed when presented at an AIM press conference with evidence that the government had withheld from the public. Here are some of our findings, in the words of each of the speakers. [We broke the press conference up into four video segments.]

“So when I arrived at Accuracy in Media in 1997, we were just starting to get into this story. And what happened is there were two people who came to us wanting to investigate this story, and wanted AIM’s help. And [they] believed that AIM is the group that would do it, that was willing to buck the media and the government. And if the evidence was there, that’s what drove us—always has, and always will.”

“And so this case, when these two people came to us. One was Commander Bill Donaldson, former Navy pilot and crash investigator, and he believed that…what happened that night was actually the result of a terrorist missile.”

“The other was the Naval exercise gone wrong theory. There was an area, Whiskey 105, where they were doing Naval exercises, testing missiles and things. Jim Sanders, a retired cop and investigator, came forward believing that this was what happened that day.”

“And the one bit of information they had that I had not seen and did not even know about, and I felt stupid for not knowing because I had presumed there was just a handful of eye witnesses and they all had conflicting reports, were the 750 FBI witness statements, 258 of which were from individuals who had seen an object ascend up off the horizon and attack the airplane.”

“According to the CIA, within two weeks of the disaster FBI agents had interviewed 144 ‘excellent’ eye witnesses—FBI word—to a likely missile strike and found the evidence for such a strike ‘overwhelming,’ FBI word. The CIA analyst then boasted of discouraging the FBI from releasing its missile report.”

“Of the 258 eyewitnesses do you know how many The New York Times interviewed? Zero. None.”

“But I think that the most shocking, the most probative evidence in the case is the CIA zoom climb animation. I mean, they put [this on] national television and told the families that really, essentially, the front third of the aircraft was blown out, was blown off—and, as Jack said, the rear two thirds of the aircraft, a weight and balance of two thirds of the aircraft, shot up the better part of a mile. I mean, it is absolutely ridiculous. It is just absurd. It’s called the zoom climb cartoon, the CIA cartoon.”

“I spoke with all of those [six] witnesses, and not one reporter called one of the witnesses. It’s just amazing.”

“But the firework went up from behind the roof line of a house and went out to sea. It wavered in its travel up and down, went out at like a forty-degree angle. And after a while it arced over, disappeared, and out of that [within] a couple seconds an explosion erupted which grew into a huge fireball. And a couple parts blew out of the fireball, but the main fuselage came out of the fireball. It was on fire in the front of the fuselage and it left like a tube of fire going from the fireball as the plane descended behind house number two, which I couldn’t see it hit the water but it went down behind the house.”

“So, I was predisposed, I would say, to the idea that there could have been a wiring arc tracking into the tank, the center wing tank on TWA 800.”

“…at that symposium by Accuracy in Media they had photographs…clearly that the left side of the fuselage had imploded. Now, aircraft do not implode—they explode. … At that moment, after two years of many interviews, I changed my mind, and I knew that it had to be a missile.”