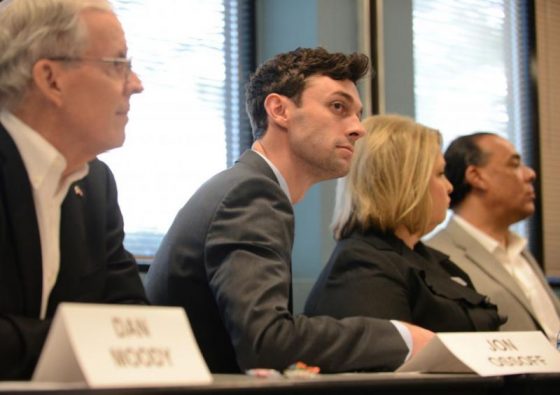 Hollywood celebs who share Kathy Griffin’s vitriol for Trump are pouring millions into the Georgia special election. Jon Ossoff’s paid Leftist army have made the fight for Republicans to retain the Georgia congressional seat a real nail-biter. Leftists’ boots on the ground shock and awe campaigning is working.

A facebook friend in Georgia reported seeing guys on her street wearing Planned Parenthood pink shirts leaving Ossoff literature on doorknobs. Shockingly, Ossoff gained a 7 point lead ahead of conservative Republican Karen Handel. Thrilled, fake news media claims Ossoff’s lead is due to a growing national rejection of Trump. They are wrong. Due to our efforts (yours and ours at Conservative Campaign Committee), Ossoff’s lead dropped to 1.5 points.

Democrats are masters of deception, always portraying themselves as the opposite of what they are, insidiously hiding their true intentions. Due to an extreme well-funded media campaign, I saw an Ossoff ad all over Georgia TV portraying him as a fiscally responsible and tax lowering moderate. The slick ad featured Ossoff on an all American front porch; possibly his grandma’s house. Sadly, the TV ad was brilliantly deceptive, hiding the truth that Ossoff is Leftists’ Great Liberal Hope. Defeating the Republican candidate in Georgia would energize their resistance to Trump and hopefully lead to removing him from office.

After campaigning for almost a month in Georgia, Mary and I drove home to Florida yesterday. But there is still much work to do to save that seat.

Patriot brother Tony Ledbetter has launched the Republican Party of Florida to help our phone from home efforts. Please join the efforts by sending an email with your name to: [email protected] We will send you a phone list, phone script and instructions on how to help Georgia Republicans bring about much needed change in leadership for District 6.

The special election is June 20th. However, early voting has begun which is scary given Democrats’ history of voter fraud. Also, Democrats found a judge who allowed them to register 8,000 new voters beyond the legal registration date.

Jon Ossoff’s main strategy is to deceive the voters of Georgia by portraying himself as Mr America-Loving Moderate. The truth is Ossoff has aligned himself with some of the most liberal elements of the Democrat Party and will be little more than a rubber-stamp “Yes-Man” to Nancy Pelosi. My artwork on facebook exposing Ossoff’s deception is a hit. Please like and share it. http://bit.ly/2s1KDgV

This race is all about Republican turn-out folks. Lord knows how many illegals, non 6th district residents and dead people Democrats will magically pull out of their hat to steal this crucial GOP congressional seat.

I call upon all my patriot brothers and sister across our great country to help stop this evil spewing out of the American Left. Kathy Griffin was not alone in her desire to see our president beheaded. Actor Jim Carrey defended Griffin sharing his desire to physically harm our president. http://bit.ly/2ryhR6e

Let us not forget Snoop Dogg’s mock assassination of Trump via a bullet to his head. http://washex.am/2n1YOjb Ossoff is the poster boy of Leftist extremists folks. This is why Ossoff must be defeated. “All that is needed for evil to prosper is for good men to do nothing.”

The Trump rally has been partially reversed. According to First Trust, the S & P 500 bank index rose 35% from November 8 through March 1. Since March 1, it is down about 9%. The S & P aerospace index advanced around 18% from election through March 1 and advanced another 4%.

The S & P 500 gained around 12.7% from the election to March 1 and is essentially flat since March 1. And then there is energy, advancing about 5% then falling about 7.5% for the same time period above.

Depending upon the index, the small cap companies are down about 10% since March.

On the other hand, the five largest technology companies in the world have rallied between 25% and 35% since January 1.

Wow! Talk about an imbalanced market.

The reason for the reversal is the belief that Trump’s pro-growth agenda has been stalled.

The greatest impetus for economic activity is job creation. According to the “The Job Openings and Labor Turnover Survey (JOLTS)” for April, the slowdown in the pace of non-farm payroll growth stems from a skills gap.

The net pace of hiring recently decelerated because of a slowdown in hiring rather than an increase in layoffs. Job opening rates match the highest on record, thus suggesting a strong mismatch in skills. A similar conclusion was made after the release of May’s labor report.

Has economic growth stalled because of Washington? Last week the Atlanta Fed upgraded their assessment of second quarter growth to 4.0% from 3.8%, the greatest growth rate since 3Q14, the quarter that Dodd Frank was fully implemented.

I will continue to argue if growth accelerates, interest rates will rise, momentum issues that thrive in a no growth environment will stall, and the smaller and value companies should advance.

This is not a radical view, but one that is steeped in historical precedence. The caveat is the massive proliferation of ETFs and technology based trading. Will there be a violent transition out of the five mega sized companies that have advanced between 25% and 35% year to date into everything else?

This is a radical thought, but did occur immediately after Trump was elected, an environment that received considerable attention.

The Dow should open flat. In an escalation of Middle East violence, the Islamic state claims a rare attack on the Iranian parliament and a major shrine. According to initial reports, the attackers were Sunni extremists. At this juncture, geopolitical politics have not negatively impacted the averages. The 10-year is flat at 2.16%. Barack Obama, then a presidential candidate, hugged Quentin Young at a union rally in Chicago in 2007. Brian Kersey / AP, file

Watch this exclusive clip about Obamacare – which proves beyond a shadow of a doubt – that the Affordable Care Act was “designed to fail.”

Due to time constraints, Trevor Loudon was forced to cut this clip about Obamacare from his documentary film, the “Enemies Within.” This never-before-seen footage from Trevor Loudon’s film, the Enemies Within provides indisputable evidence that President Barack Obama deliberately designed his healthcare legislation to pave the way for a single-payer system.

Obamacare was intentionally set up to pave the way for the long-time socialist vision of a “Single Payer” system, or as Bernie Sanders euphemistically puts it, as “Medicare for All.”

“Government-run heathcare is great as long as you don’t get old or sick.” – Trevor Loudon

In partnership with the Capital Research Center and Dangerous Documentaries, we have been working on a 5 part series called America Under Siege. We have recently released part 2 of 5 called Soviet Islam. We expose the connections to the Muslim Brotherhood and modern communist groups in the USA.

You can watch for free below:

If you didn’t get a chance to see part 1 Civil War 2017 about the anti-Trump protesters, you can view it here:

These videos are free, and we would like to encourage you to share this information with all of your friends. This is information the main stream media refuses expose. This article appeared first at Bombthrowers.

Not all military types lean to the political right.

A case in point is Austin Binns, a former Eagle Scout and an active and highly competent ROTC officer — as well as a militant socialist activist. Though leaning to the left since his teens, Binns (see KeyWiki article) has gone overboard since studying politics at Philadelphia’s Drexel University.

Five years ago, Binns was a volunteer for Obama for America. He followed that up with campaign work for the unsuccessful runs of leftist Philadelphia Democrats like Allyson Schwartz (governor) and Manan Trivedi (U.S. House).

But since 2016, while still serving in the U.S. military, Mr. Binns has been actively involved with the Philly Socialists and one of their student groups, Drexel Socialists. Philly Socialists are hardcore. One of their leaders, Brandon Slattery, is a former leader of the Young Communist League, the youth wing of the Communist Party USA. They are undeniably and unapologetically revolutionary Marxists.

They hold seminars that examine topics like “The History of Marxism: Pre-Marxism and Post-Marxism; Race and Socialism; Gender and Socialism.”

Does the United States Army care that one of its stellar young officers is a revolutionary? That he marches alongside hardcore Marxists and Antifa types? Are such views and activities acceptable in today’s U.S. military?

Is being an active revolutionary socialist compatible with serving as a U.S. Army officer?