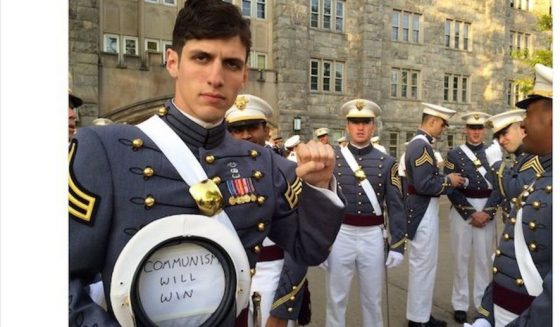 When I first saw this story go by this morning, I thought for sure it was fake news. Silly me, it’s not. Photos surfaced today of a West Point alumnus and combat veteran who was holding a pro-Colin Kaepernick “Communism Will Win” sign within his cap and while he was in uniform. This really ticked off the military community. I’m still hearing about it.

I am appalled that an alumnus of West Point would do this. He’s an outright, unapologetic communist and proud of it. He should be booted from the military. Infantry Officer Spenser Rapone had his pics posted on a popular military news site today and a massive debate concerning the NFL protests and the National Anthem ensued. Of course, Colin Kaepernick was a big part of the discussion as he started all of this in 2016. “I could be wrong, but I’m pretty sure Colin Kaepernick wasn’t protesting in favor of communism. #ThatGuy,” wrote “Doctrine Man,” who is the moderator of a well-known Facebook page frequented by active military personnel and veterans. No, but he might as well have. He’s protesting for militant, radical racism and it is all wrapped up in communism. See Black Lives Matter.

Rapone’s Twitter handle is “Punk Proletarian,” under the name “Commie Bebop.” How apropos. He raised a clenched fist in support of Kaepernick in his photo. Another pic showed Rapone revealing a Che Guevara shirt under his uniform. Several sites picked up on the commie soldier… chief among them were LawNewz.com and Gateway Pundit. Rapone uses hashtags such as #CommunismWillWin, #Marxwasright and #VeteransForKaepernick.

“Old school grunt here, I was in Berlin when the Wall fell,” wrote Rick Wynne on the Doctrine Man Facebook page. “I can tell you I would NEVER have expected to see photos like these. Wow! I mean, wow! What the hell has happened to the Army? No body policed this crap up when it happened?” John Zehmisch added, “This old First Sergeant recommends that this prior enlisted soldier be given UCMJ action, a thunk on the head for being stupid and a one-way ticket to the front gate.” Another reader, Stephen Stout, stated, “He needs to be discharged for conduct unbecoming of an officer and failure to uphold his oath to defend the Constitution of the United States. Communist extremism is not compatible with being a Soldier in the U.S. Army. He needs to be punished by UCMJ to the fullest extent.” 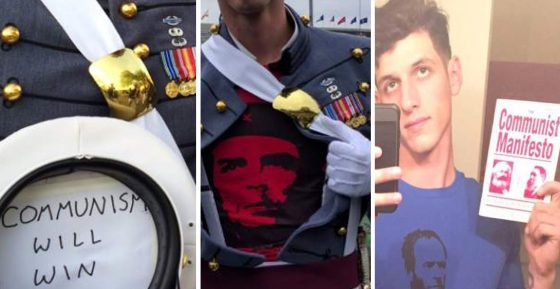 Rapone is also inciting violence. In an op-ed he posted on Medium on Aug. 16th, just a few days after the tragic events in Charlottesville, Virginia, between Antifa, Black Lives Matter, the KKK, white supremacists and communists (all fighting over Confederate monuments supposedly), he called for the nation to “come together and dismantle [America’s] racist structures, both in word, but more importantly, in deed.” This guy is embarrassing West Point. They issued a statement after that saying that the officer’s actions “in no way reflect the values of the U.S. Military Academy or the U.S. Army. As figures of public trust, members of the military must exhibit exemplary conduct, and are prohibited from engaging in certain expressions of political speech in uniform,” the statement read. “Second Lieutenant Rapone’s chain of command is aware of his actions and is looking into the matter. The academy is prepared to assist the officer’s chain of command as required.”

Now, the hundreds of tweets this asshat has put out are being scrutinized. He obviously is enamored with Democratic Socialists of America. Pro Tip: Communism is a political theory penned by Karl Marx that advocates class war and a society where the lower class would revolt and take down the upper class, destroying capitalism and bringing about socioeconomic emancipation where all property is publicly owned and people are paid based on their skills and needs. Rapone tweeted: “In case there was any lingering doubt, hasta la victoria siempre,” which means “until victory, always,” and are lyrics to a song that became famous after Guevara’s death in 1967. 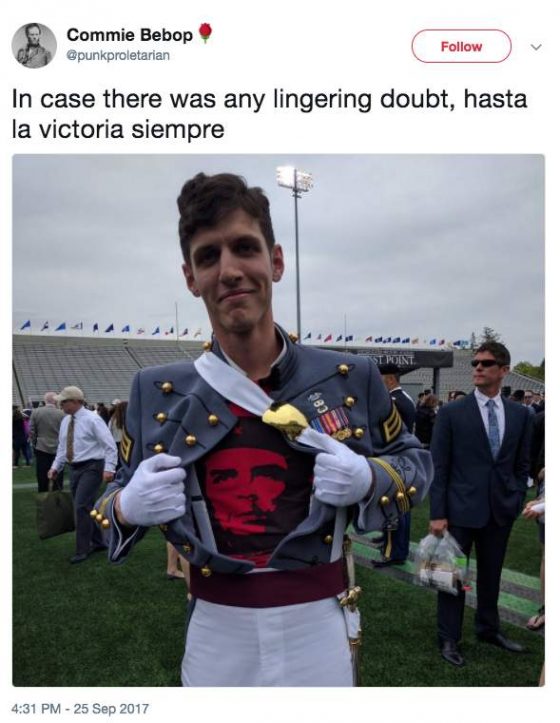 “[Democratic Socialists of America Veterans] issued me this CIB [Combat Infantryman Badge] for satisfactory performance under hostile enemy posting online in the twitter firefight of 26JUL,” he tweeted in August, using the hash tag “Troop Left.” And he tweeted about why he joined DSA: “I joined because capitalism has basically ruined my life since I was born.” Do tell. Just wait until you experience communism for real, you idiot. He also refers to West Point as “a bastion of reactionary politics and imperialist violence.” Doing West Point proud. This guy is a big supporter of everything communist, Antifa and Black Lives Matter.

He tweeted in August: “Looting is good,” “I hate capitalism,” and “If you’re against antifa then by definition you’re profa.” It’s a case of either with us or against us… either you are Antifa or you are a fascist. For those wanting a better definition of Antifa and their history, here’s Trevor Loudon’s latest documentary – it’s fantastic:

On his Twitter profile, Rapone writes: “Troop Left, Commie/space cowboy/straight edge insomniac,” and tags the Democratic Socialists Veterans page. From a Marxist point of view, socialism is a transitional state between the lower class revolt and the overthrow of capitalism and full-blown communism. Antifa is all over Europe. They are uber-violent and proudly communist. And they are spreading here in the US along with the DSA and CPUSA. Rapone is a radical communist and a true enemy from within. He’s a danger to our military and to America in general. Let’s hope the military shows him the gate. Then he can spend all his time with Antifa until he’s taken down. 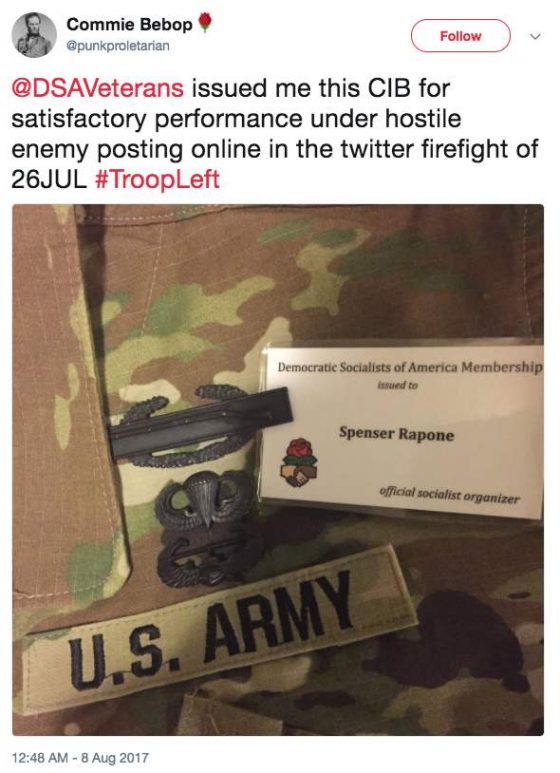 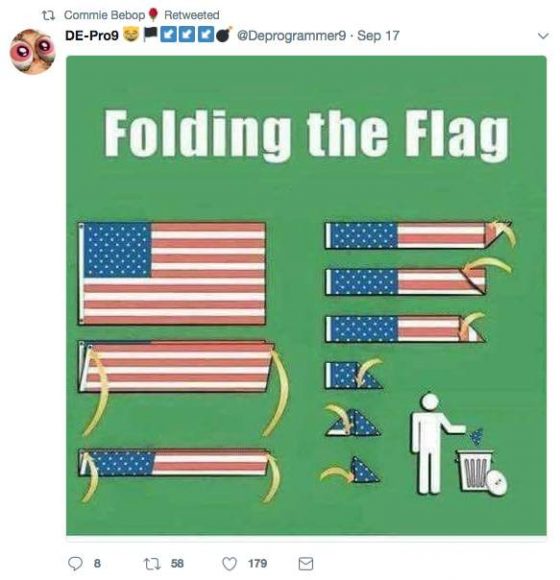 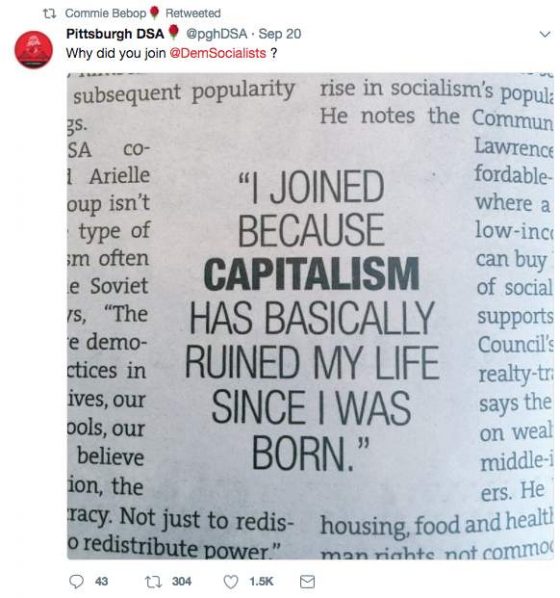 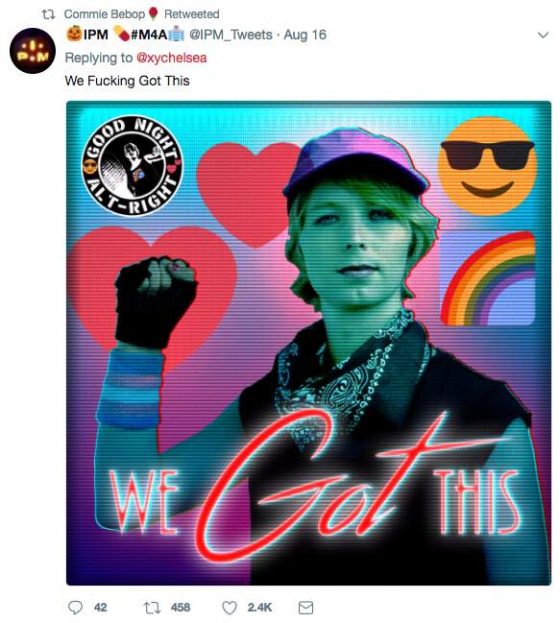 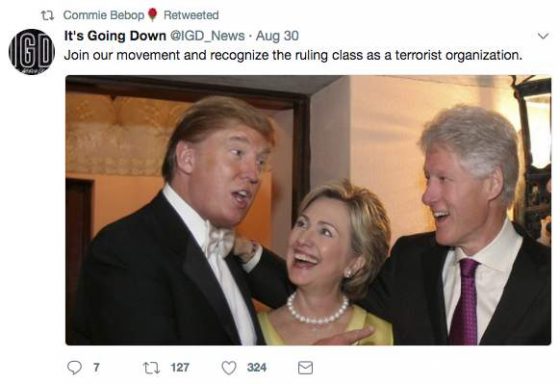