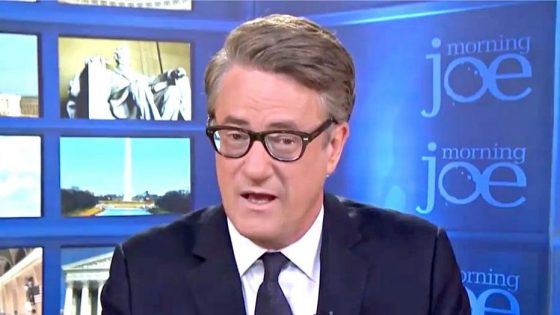 WTH is wrong with Joe Scarborough? The guy has literally lost it in leftist land. The White House is furious, and justifiably so, over Scarborough comparing the methods used in current immigration policy to the Nazis. He used to be a Republican congressman before he slithered over to MSNBC. Now, we get crap like this.

You won’t be shocked in the least to know he was referring to the Thursday White House press briefing where Sarah Sanders gave CNN’s Jim Acosta and Playboy Magazine’s Brian Karem a spanking over making dishonest statements concerning illegal immigration, the border and separating children from parents. Scarborough accused Sanders of lying on his “Morning Joe” program. “So why is she lying this much?” Scarborough asked. “I know children are being ripped from their mother’s arms, even while they’re being breast-fed. I know children are being marched away to showers, marched away to showers. Being told they are — just like the Nazis — said that they were taking people to the showers and then they never came back,” he said.

Just wow. That’s an insult to every Jewish family that lost loved ones in the Holocaust and it’s a lie. “You think they would use another trick like ‘Hey, got a slurpee room over there.’ ‘We’re going to take them to get a slurpee,’” Scarborough continued. “That would be better than ‘We’re marching them to the showers and we’ll be right back’ and they never come back.” He makes it sound like they are being exterminated. What a leftist horrific lie.

The White House wasn’t going to stand for it. “It is appalling that Joe Scarborough would compare sworn federal law enforcement officers— who put their lives on the line every day to keep American people safe— to Nazis,” White House Deputy Press Secretary Hogan Gidley said in a statement provided to Fox News. “This is the type of inflammatory and unacceptable rhetoric that puts a target on the backs of our great law enforcement.” Scarborough doesn’t give a fig about those kids. He’s trying to be in the spotlight and score political points against President Trump.

“It is also horribly insulting to the memory of the 6 million Jews who perished in the Nazi Holocaust. Not only is Scarborough’s rhetoric shameful, but his facts are categorically false. When American citizens break the law, they are separated from their children and prosecuted. It’s unclear why Scarborough believes that illegal aliens are entitled to more rights than those afforded to American citizens. While Scarborough is quick to launch into his straight-to-camera outrage over the temporary separation of illegal alien families, he has never shown similar outrage for the permanent separation of American families forever torn apart from their children, who were killed by criminal aliens as a result of Democrats’ open borders policies,” Gidley continued. Bulls-eye… exactly.

“If Joe Scarborough actually cared about keeping illegal alien families together, he would use his platform to support the Trump Administration’s efforts to close loopholes in federal immigration law,” the statement said. Yes, he would. But just like his other Democratic comrades, that’s not the point. They want that border left open and millions to come in to populate a permanent Marxist voting base. And they want to destroy President Trump while they do it.

During Friday’s segment featuring Scarborough, Mika Brzezinski, John Heilemann and Willie Geist, Joe wondered aloud whether Sanders was “lying” or simply “ignorant.” He really went low. The policy that Joe refers to is Obama’s by the way. “For somebody quoting the Bible, as much as she’s quoting the Bible, that’s just why I hope that she’s just completely ignorant, and isn’t lying on purpose to the American people that many times, Mika, that would be terrible,” he said. Considering Scarborough doesn’t have a religious bone in his body, that’s just hypocritical in the extreme. He’s pulling a Jim Acosta. It’s the left’s new talking point.

“There’s a commandment against the lying,” Scarborough said later in the conversation. “It’s also not biblically based that you rip children from their parents. I believe it was Jesus Christ of Nazareth who said ‘let the little children come.’” But it is in the Bible to obey the law. And his biblical quote does not mean what he is using it to mean – he’s taking it out of context. Jesus meant for the children to come unto Him, not the Democratic voting block or into the arms of communists. Give me a freaking break.