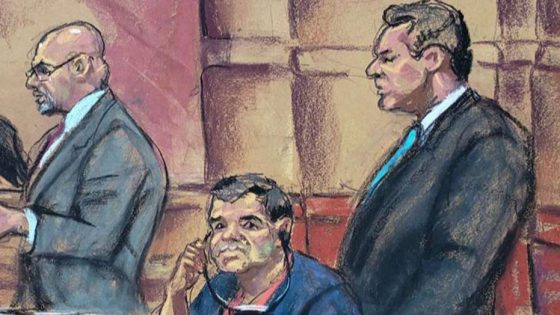 “Individuals and entities who are not party to this case would face embarrassment and harassment if this information were made public,” Cogan told the court Tuesday morning. He ruled that the entire half-hour sidebar would be kept out of the public record, and that prosecutor’s motion to exclude such testimony would be redacted before it was entered. More here.

“I worked for the Sinaloa cartel,” Miguel Ángel Martínez told federal jurors in a Brooklyn courtroom. Then he identified the man he said gave him orders for moving billions of dollars in narcotics. “I worked for Mr. Joaquín Guzmán.”

Martínez outlined the cartel’s inner workings, testifying that Guzmán negotiated an ownership and profits split with Colombian drug leaders who contracted with him to fly cocaine from secret South America airstrips to similar landing spots in Mexico.

The drugs were then smuggled across the Mexico-U.S. border to Los Angeles, Chicago, and New York, Martínez said.

The defense has claimed that Martínez and other cooperating government witnesses are liars who would say anything in exchange for legal leniency.

Martínez said the cartel sought to avoid investigators by using secret codes. Talk of having a party tonight, he said, “meant get the planes ready.”

Martinez said he began working for Guzman as a pilot and as a guide to other pilots on drug flights in 1987. He said one of the pilots he assisted that year, on a flight carrying 170 kilograms (375 lbs) of cocaine, claimed he had flown in the U.S. Navy.

Martinez said he was soon relieved of his pilot duties after damaging a propeller in a botched landing with Guzman on board. Guzman, he recalled, told him he was a “really bad pilot” and sent him instead to Mexico City to open an office for the cartel.

Posing as attorneys, Martinez said, he and others at the office directed bribes to government officials so the cartel could operate undisturbed. The beneficiaries included a high-ranking police official, Guillermo Calderoni, who fed Guzman information about law enforcement activities “every day,” Martinez said. 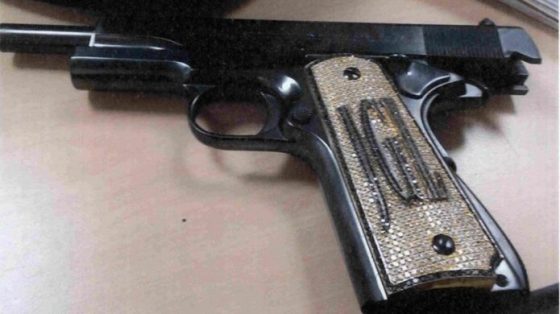 El Chapo’s reputed extravagance extended even to his extensive collection of weaponry, the trial has heard.

Among his prized possessions were a diamond-encrusted, monogrammed pistol and a gold-plated AK-47.

Assistant US Attorney Adam Fels said in his opening argument that El Chapo had sent “more than a line of cocaine for every single person in the United States” – in just four of his shipments.

That amounts to over 328 million lines of cocaine, said the prosecutor.

Mr. Zambada said that once, in 1994, Mr. Guzmán gave the order to sink a boat carrying 20 tonnes of cocaine to evade authorities.

The court also heard that Mr. Guzmán once used a bazooka for target practice – to relax on a family holiday.

Mr. Zambada said El Chapo took the anti-tank rocket launcher with him on a trip with relatives in 2005.

He decided to “test out” the weapon after the group had finished target practice with assault rifles, according to the witness.

Some of the biggest news from testimony was how the Sinaloa cartel allegedly paid off a host of top Mexican officials to ensure their drug business ran smoothly.

Mr. Zambada said the traffickers had $50m (£39m) in protection money for former Mexican Secretary of Public Security García Luna, so that corrupt officers would be appointed to head police operations.

Mr. Zambada said he gave the money to Mr. Luna in briefcases full of cash. Mr. Luna has denied the allegations.

When former Mexico City Mayor Gabriel Regino was in line to become the next secretary of security, Mr. Zambada says the cartel bribed him, too.

Mr. Regino, who is now a professor, has also denied the claims.

A 6in (15cm) figurine of a folk hero dubbed the narco-saint has been spotted on a shelf in a conference room used by the defendant’s lawyers at the court, the New York Post reported.

The statue of Jesús Malverde , which has him seated on a purple throne with bags of cash, appeared on Wednesday, one of El Chapo’s lawyers told the newspaper.

Jesús Malverde has been celebrated as a Robin Hood-type hero who, legend says, stole from the rich and gave to the poor in the early 1900s. 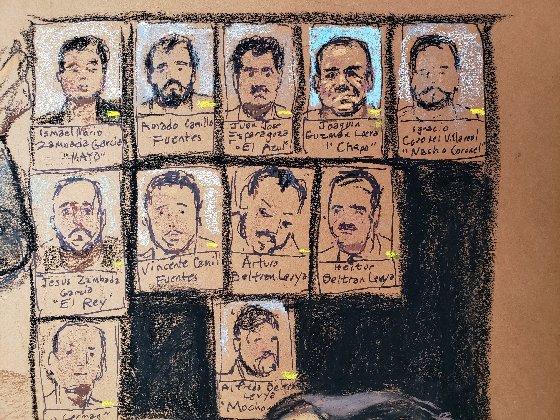 It could be said that two separate trials are taking place, side by side, these days in Room 8D of the Federal District Court in Brooklyn.

At the actual trial, the United States government is prosecuting Joaquín Guzmán Loera, who is accused of being one of the world’s biggest drug dealers. Widely known as El Chapo, Mr. Guzmán, prosecutors say, earned as much as $14 billion as head of the Sinaloa drug cartel — a fortune he is said to have protected with rampant payoffs and an army of professional assassins.

But at a second trial of sorts, Mr. Guzmán’s lawyers are, in essence, prosecuting the government of Mexico. By their account, the country’s police and politicians not only are corrupt, but also have conspired for years with Mr. Guzmán’s partner, Ismael Zambada García, to target El Chapo in exchange for a flood of bribes.