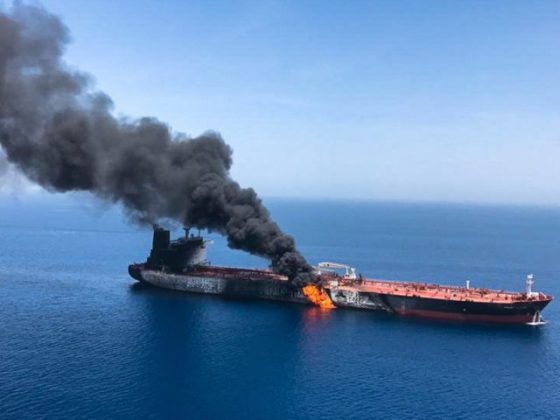 A note that you aren’t hearing on the news… the cargo of both tankers belong to Japan and Shinzo Abe just happened to be in Tehran at the time of the attacks. Makes you go ‘hmmm’. And some might recall the 1980’s tanker wars with Iran – this is old-hat for the regime. And of course, Iran is denying they are behind the attack… instead pointing the finger at the US. Saudi Arabia is calling it a ‘major escalation’. We can all be thankful none of the crew members on the two ships were killed today.

Abe warned yesterday that the tense Middle East standoff, which has seen furious exchanges between America and Iran, could lead to an ‘accidental’ war. Accidental? There’s nothing accidental about any of this. Russia said it was too early to say who was behind the explosions. No, it’s not and Russia is working in tandem with Iran on these attacks. Where there is evil or chaos and death… Russia is not far behind.

Dramatic images from the huge oil tanker that has reportedly been torpedoed in an attack off the coast of Iranhttps://t.co/eDhsLjo3Dv pic.twitter.com/pKWRrsxWXr

The Japanese owner of the Kokuka said the ship’s crew were rescued by a Dutch vessel, then taken to a US warship in the Fifth Fleet. Iran said its search and rescue teams had picked up the 44 sailors from the two ships and had taken them to the port of Jask. I don’t believe them. If they had, they would have taken them hostage and would be holding them now. The ship’s 21 crew were picked up by the nearby Vessel Coastal Ace, leaving the tanker adrift and empty after an engine room fire. They had been en route to Singapore.

The Iranians also claimed the Altair sunk but again, it didn’t. Its crew of 23 were picked up by nearby vessel Hyundai Dubai. The crew was made up of 11 Russians, one Georgian and 11 Filipinos, International Tanker Management said. The Altair had been loaded at a port in the Gulf with a petroleum product known as naphtha and was on its way to the Far East. The cargo was worth more than $30 million.

Commander Joshua Frey, a spokesman for the US Navy’s Bahrain-based Fifth Fleet, said his command was ‘aware’ of a reported incident in the area. The fleet received one distress call at 6.12 am local time and another one at 7 am and the guided-missile destroyer USS Bainbridge offered assistance.

From The Daily Mail:

“Japanese trade minister Hiroshige Seko said there had been ‘Japan-related’ cargo on board the vessels. Japan, a U.S. ally, is was big importer of Iranian oil until Washington ratcheted up sanctions.

“‘Lately we have been seeing a strengthening campaign of political, psychological and military pressure on Iran. We wouldn’t want the events that have just happened, which are tragic and shook the world oil market, to be used speculatively to further aggravate the situation in an anti-Iranian sense,’ he said.

“Speaking to the security council today he demanded that ‘facts must be established’ and said: ‘I strongly condemn any attack against civilian vessels’.”

Earlier this morning, two #tankers, #FrontAltair & #Kokuka Courageous, were reportedly torpedoed off the coast of #Oman. Watch their final movements before the reported #incidents in this past track video and learn more here: https://t.co/Odj8NYkkSm #marinetraffic pic.twitter.com/78XRuBorut

Last month after other attacks and warnings, the US deployed B-52 bombers and the aircraft carrier USS Abraham Lincoln to shore up its military presence in the region. That was after Iran-backed Houthi forces claimed responsibility for sabotaging Saudi oil tankers in the Gulf of Yemen. Saudi and UAE officials were tight-lipped about the extent of the damage but pictures showed at least one tanker with a hole in its hull. Yemen’s Iranian-backed Houthi rebels attacked a Saudi airport, wounding 26 people yesterday as well.

The expected sabotage sent tensions soaring in the Middle East as the US blamed Iran and its allies for the attack which divers said appeared to be the work of magnetic explosives. Matters worsened after two pumping stations on a major Saudi oil pipeline were attacked by explosive-laden drones.

#Incident Reports of vessel MT Front Altair being on fire & adrift at position 2527N 05722E are being investigated. No cause has been positively confirmed. Latest information will be communicated when available. Contact our team via https://t.co/Qv7PyCfXM3 #Fujairah #UAE #attack pic.twitter.com/0Z4aIBzE5M

All of this is to strike back at the US for bailing out of the horrific deal Obama struck with Iran and to get even for the US calling for worldwide sanctions against the largest purveyor of terrorism on the planet. A confrontation is coming and soon with Iran and the media is not even reporting on it much… they instead opt to do fake news on going after Trump officials. None of that will ever materialize but they are hoping to keep Americans distracted from acts of war in the Middle East. The winds of war are blowing.

Statement from the US’ naval presence in the region, the @US5thFleet US ships in the area are giving assistance #OOTT #oman pic.twitter.com/6EZd9050jd

M.T Front Altair has been abandoned and its all crew has been safely picked up by nearest vessel Hyundai Dubai.

Master of Hyundai Dubai reported cause of fire on Front Altair as surface attack.

Front Altair is a loaded tanker on fire and adrift about 18 NM off our position. pic.twitter.com/QNuSbQF95b

Aerial footage shows one of the oil tankers targeted in the Sea of Oman#SeaofOman pic.twitter.com/mdvEPPT3J4

These photos show Panama-flagged Japanese-owned #Kokuka Courageous tanker hours after attacked in the Sea of Oman. The vessel is apparently unharmed after the fire has been put off.#TheSeaofOman pic.twitter.com/ojKMNw4CxZ 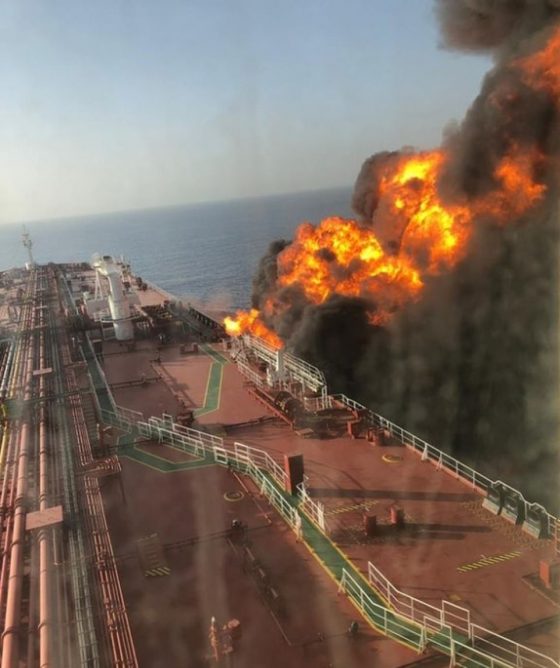 Inferno: A fire rages on board the oil tanker MT Front Altair after it was hit by an explosion in the Gulf of Oman today, in what has been described as a torpedo attack 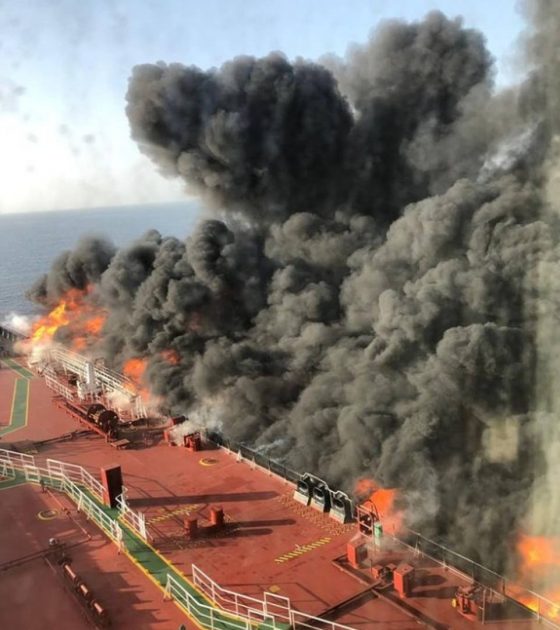 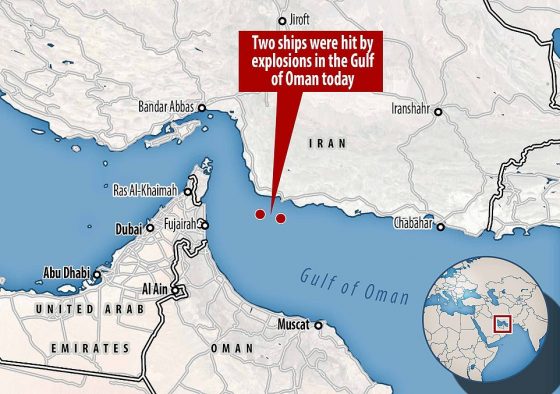 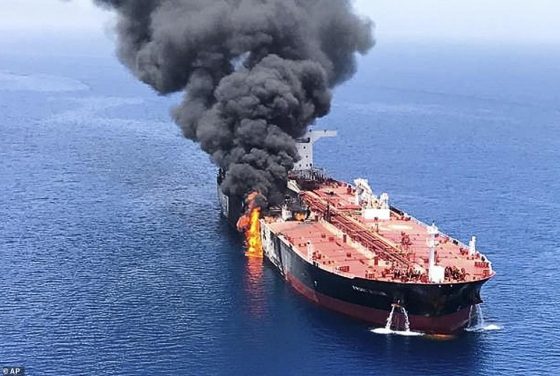 One thought on “Acts Of War: Two Oil Tankers Attacked In The Gulf Of Oman… Iran Suspected”