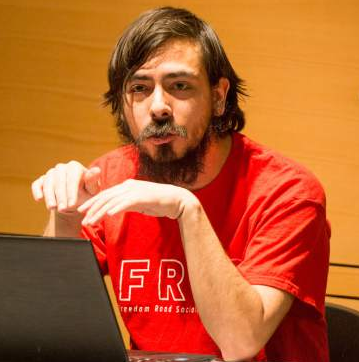 He is a leader of Utah Against Police Brutality and the Maoist communist group Freedom Road Socialist Organization/FightBack!

Lucero has been active in Salt Lake City for nearly a decade with the Revolutionary Students Union, through which he served on the student commission of Freedom Road.

At one meeting Lucero stated: “We’ve all made great efforts to study Marxism-Leninism as students. We can learn historical lessons from the struggle and bring them to our fight for justice today.”

Lucero has been very active in the anti-Trump protest movement.

When Utah communists organized, 2500 people proceeded to protest at a Dump Trump rally in Salt Lake City on Friday night, March 19th, 2016. Gregory Lucero from Utah Against Police Brutality told the crowd, “If I get arrested tonight I’m willing to sacrifice my job, my livelihood, because Trump is that dangerous.”

Protesters chanted: “Hey hey, ho ho, Donald Trump has got to go!” “Dump Trump he’s a Trump!” “Shut it down!” “Whose streets? Our streets!” and “Trump and Klan go hand in hand!”

On Nov. 15, 2016, over 300 people gathered for a mass meeting organized by the ANSWER Coalition in Chicago. The meeting was organized to help spark a “mass movement to defend immigrants, Muslims, people of color, LGBTQ people, women and all those under attack by the impending Trump administration.”

Syed Ali Hasan, from People United Against Oppression, described the wave of fear which has swept through the Muslim community in the wake of the election but also reminded the crowd that for Muslims the election was a choice between Trump’s racist attacks and Clinton’s policy of domestic surveillance and infiltration of the Muslim community. “This system has failed us,” he said.

Other speakers at the meeting included Gregory Lucero and Joe Iosbaker from the Freedom Road Socialist Organization/FightBack! and “diplomat” Jesus Rodriguez-Espinoza from the Venezuelan Consulate.