California has now driven a larger divide between the public and law enforcement. You can bet a few other states may follow the same tactic. 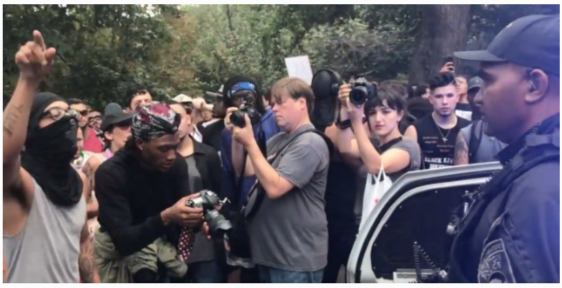 If you saw an officer in need of help… what would you do?

Most people would step in and offer assistance… no questions asked.

But in California’s latest move to further the divide between the police and the public, citizens would now be legally allowed to refuse to help a police officer who needs assistance.

Moral dilemma? From assisting an officer with an arrest if he’s in need of help?  We get it. Maybe there shouldn’t be a fine or a jail sentence associated with choosing to not get involved. Perhaps the original law from the 1870’s is a bit outdated.

But what is this bill really saying?

Essentially, it’s driving a bigger wedge between officers and civilians.

People now are essentially told to let a cop fend for himself if he’s being overpowered by a dangerous victim. It affirms the decision to stand by and film or watch while a hero’s life is in danger.

The new bill would get rid of the old law – the California Posse Comitatus Act of 1872, which required a civilian to step in and assist an officer during an arrest if necessary. For those who ‘violated’ it, they could face up to a $1,000 fine.

9,999 times out of 10,000… an officer isn’t going to ask for an untrained bystander to step in and help. But sometimes it’s necessary… and it could mean the difference between life and death.

Let’s look at this objectively.

How many people were ever really charged with this misdemeanor? What Governor Newsom did was remind everyone that they have a choice — and basically push them to make the choice to carry on with their lives instead of getting involved.

Our question is… if this law had simply remained the way it was, how many people would have chosen to step in and help when they saw another human in need?

And how big of a drop-off rate would we see now that this bill is being pushed in the public eye? Will people see a police officer being attacked and because they don’t like cops, they choose to stand there and watch him die?

It brings back memories of the time when a bystander chose to broadcast an officer’s death to Facebook Live instead of putting down the phone and doing what they could to help.

Is this the country we want to live in?

Will protesters and anti-police ‘activists’ feel even more emboldened by their supposed morals?

The California State Sheriff’s Association said they were “unconvinced that this statute should be repealed.”

Of course. Though it may have stemmed from the days of slavery… this law is ultimately about doing what’s right and assisting a public servant in their time of need. Read more here.