Voters would all be rich if we had a dollar for every leak, lie and scandal coming out of Washington, DC.

Department of Justice prosecutors are reportedly investigating the possibility that former FBI director James Comey leaked a classified Russian intelligence document to the media during the Hillary Clinton email investigation, according to a Thursday report from the New York Times.

Per the Times, the investigation is centered around two 2017 articles from the Times and the Washington Post describing the Russian document, which played a key role in Comey’s unilateral decision to announce the FBI would not pursue charges against Clinton for using a private email server to conduct official business during her time as secretary of state.

The document, which was shared with the U.S. by Dutch intelligence, includes an analysis of an email exchange between Representative Debbie Wasserman-Schultz (D., Fla.), who was then chairing the Democratic National Committee, and Leonard Bernardo, an official with the Soros-backed non-profit Open Society Foundations. Wasserman-Schultz assures Bernardo in the email that then-attorney general Loretta Lynch will make sure Clinton wasn’t charged in the email probe.

Comey has long taken criticism for his handling of the Clinton investigation from Republicans and President Trump, who suggested in December that Comey could get jail time. 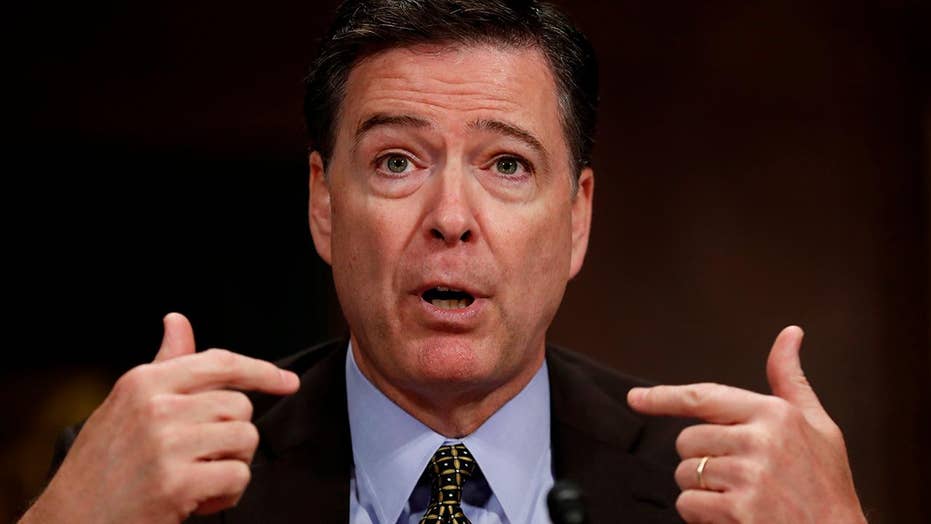 Well now, the plot thickens with new names in the equation:

We cannot forget this little item either. Former FBI Director James Comey violated official policy in the way he handled his memos describing his exchanges with President Trump, an investigation concluded — but Comey won’t be charged. Justice Department Inspector General Michael Horowitz conducted the investigation into Comey’s actions and then referred his results to prosecutors.

“After reviewing the matter, the DOJ declined prosecution.”

One involved the former director’s decision to arrange for a friend to disclose the contents of a memo to a New York Times reporter. Another involved Comey’s decision to keep memos at home and discuss them with his lawyers but not reveal to the FBI their contents or what he was doing.

In part from RedState: Now this new investigation involves leaks relating to two articles including one in the Washington Post and another in the NY Times (now we see why the spinning) about a Russian intelligence document, which the Times says was highly classified.

Now, this part is fascinating:

The document played a key role in Mr. Comey’s decision to sideline the Justice Department and announce in July 2016 that the F.B.I. would not recommend that Hillary Clinton face charges in her use of a private email server to conduct government business while secretary of state.

Wait, what? What would a Russian intelligence document have to do with Comey stepping in and taking the power away from the DOJ, which he could not properly do anyway? At the time, Comey implied in his reasoning that there was classified information with regard to Attorney General Loretta Lynch.

The document is mentioned in a book published last fall, “Deep State: Trump, the F.B.I., and the Rule of Law” by James B. Stewart, a Times reporter.

Here’s the money paragraph, hidden down in the story.

The latest investigation involves material that Dutch intelligence operatives siphoned off Russian computers and provided to the United States government. The information included a Russian analysis of what appeared to be an email exchange during the 2016 presidential campaign between Representative Debbie Wasserman Schultz, Democrat of Florida who was also the chairwoman of the Democratic National Committee at the time, and Leonard Benardo, an official with the Open Society Foundations, a democracy-promoting organization whose founder, George Soros, has long been a target of the far right.

That document was one of the key factors that drove Mr. Comey to hold a news conference in July 2016 announcing that investigators would recommend no charges against Mrs. Clinton. Typically, senior Justice Department officials would decide how to proceed in such a high-profile case, but Mr. Comey was concerned that if Ms. Lynch played a central role in deciding whether to charge Mrs. Clinton, Russia could leak the email.

Whoa, so strip everything away and what the document says is that Debbie Wasserman Schultz was guaranteeing that Lynch would get Hillary Clinton off.

So where is the investigation of this?

The Times does the best it can, suggesting it’s disinformation. They literally accuse Trump of trying to pressure the DOJ to investigate his enemies despite no such thing ever occurring.

But American officials at the time did not believe that Ms. Lynch would hinder the Clinton email investigation, and neither Ms. Wasserman Schultz nor Mr. Benardo had any inside information about it. Still, if the Russians had released the information after the inquiry was closed, it could have tainted the outcome, hurt public confidence in the Justice Department and sowed discord.

Prosecutors are also looking at whether Mr. Richman might have played a role in providing the information to reporters about the Russia document and how it figured into Mr. Comey’s rationale about the news conference, according to the people familiar with the investigation. Mr. Comey hired Mr. Richman at one point to consult for the F.B.I. about encryption and other complex legal issues, and investigators have expressed interest in how he operated.

Mr. Richman was quoted in the April 2017 article in The Times that revealed the document’s existence. A month later, The Post named Ms. Wasserman Schultz and Mr. Benardo as subjects of the document in a detailed article. A lawyer for Mr. Richman declined to comment.

This is going to be interesting to see it when the information ultimately comes out without the New York Times spin on it. But this is pretty huge.