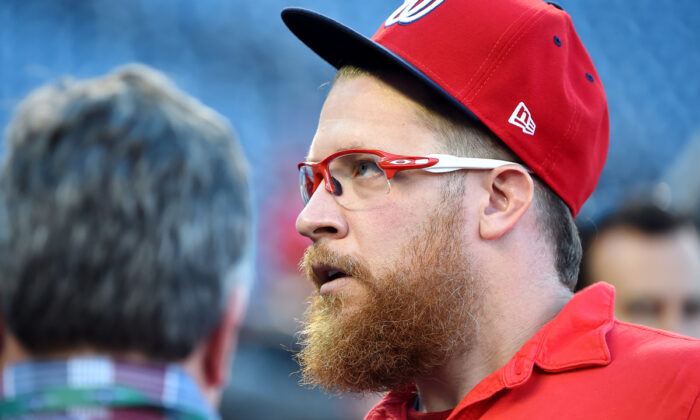 Washington Nationals pitcher Sean Doolittle looks on during batting practice prior to Game Five of the 2019 World Series against the Houston Astros at Nationals Park in Washington on Oct. 27, 2019. (Will Newton/Getty Images)

After the Washington Nationals baseball team won the prestigious World Series on Oct. 31, 2019, the victorious team paid the traditional visit to the White House to be congratulated by President Donald Trump—except for one team member.

Pitcher Sean Doolittle declined to meet with the president. And he got political about it—which is not surprising because Doolittle is a bona fide socialist.

I can’t condemn Doolittle for standing by his principles—as much as I disagree with them—but I can fault the many media outlets who gleefully reported the snub—without giving the public the full background.

No major media outlet, as far as I know, was willing to reveal that Doolittle is a card-carrying socialist. He is a member of the United States’ largest Marxist organization, the Democratic Socialists of America (DSA).

This is an extremist organization. The DSA advocates the abolition of police, prisons, and borders. The DSA is more extreme than the Communist Party USA, though the two groups work closely together and have some overlapping membership.

The DSA defends Iran, North Korea, Cuba, and Venezuela. The DSA also wants to completely boycott Israel, one of the United States’ most valuable allies.

Given these positions, it’s not surprising that neither the DSA nor Doolittle are friends of the president. It’s understandable that Doolittle would not want to shake hands with President Trump. But the voting public, including the millions of sports fans out there who idolize people like Doolittle, need to know who the extremist was here—and it wasn’t President Trump.

Doolittle earned about $6 million in 2019 playing for a privately owned franchise.

Though they won’t often publicly admit it, the DSA is very much opposed to private business.

Detroit DSA chair David Green laid it out in a 2007 article in the DSA’s Democratic Left magazine.

“Our goal as socialists is to abolish private ownership of the means of production.”

I wonder if Doolittle would still pull in several million a year if the federal government owned baseball? Communist Cuba has a state-subsidized professional baseball league. Why doesn’t Doolittle get transferred there? I’m sure he would take a salary hit, but as an elite athlete, I’m sure the communist authorities would give him all the rice and beans and maybe even chicken he could eat.

Green also wrote about the role of socialists in the labor movement:

“Our immediate task is to limit the capitalist class’s prerogatives in the workplace. …

“In the short run we must at least minimize the degree of exploitation of workers by capitalists. … We can accomplish this by promoting full employment policies, passing local living wage laws, but most of all by increasing the union movement’s power.”

On the night Doolittle helped his team win the World Series, the DSA sent their comrade a congratulatory tweet:

“Congratulations to Nationals pitcher Sean Doolittle @WhatWouldDOODo on your World Series victory! We thank DSA members Sean and his wife @EireannDolan for their work with the MLB players union and for supporting unionized New Era factory workers’ rights.”

We thank DSA members Sean and his wife @EireannDolan for their work with the MLB players union and for supporting unionized New Era factory workers' rights.https://t.co/15jYgiWptd

Doolittle’s wife, Eireann Dolan, is also a DSA comrade. She’s a member of the Washington, D.C. branch when the couple live in the Capital for the baseball season.

The couple donates a lot of money to charities, such as Operation Finally Home, a nonprofit dedicated to “providing housing for U.S. military veterans and their families.”

Some of their giving has been a little more ideologically driven.

In June 2015, when the Oakland Athletics Pride Night received backlash from some fans for the team’s support of the far-left LGBT agenda, Doolittle and then-girlfriend Dolan bought hundreds of game tickets, which they donated to local LGBT organizations, and then raised an additional $40,000 in donations and chipped in $3,000 themselves.

Later that year, Doolittle and Dolan hosted a Thanksgiving dinner in her hometown of Chicago for 21 Syrian refugee families.

Doolittle, of course, has been a strong critic of President Trump’s attempts to limit unvetted refugee re-settlement from terror-prone countries.

“The new government is relying on stereotypes and Islamophobia, using false information to support its immigration reforms. The facts tell a different story: Crime rates are lower for refugees and immigrants than for American citizens, and net illegal immigration from Mexico is thought to be at or less than zero.”

To be fair, Doolittle made that statement before the border-crossing surge of 2017 to 2019.

But then again, most socialists are not known for putting U.S. citizens’ safety and security first.

Doolittle belongs to a small “c” communist organization. That doesn’t mean he’s necessarily a communist himself, but it does make him well out of the American mainstream.

Perhaps a responsible media would have highlighted more of Doolittle’s extremist background when reporting on his snubbing of the president.

Doesn’t the public have the right to know all the facts?