One has to travel to Russia and visit the archives in Yaroslavl to see the full details of the trip of then-Mayor of Burlington, Vermont, Bernie Sanders — that’s where he went for his honeymoon.

IN part from the NYT’s: Many of the details of Mr. Sanders’s Cold War diplomacy before and after that visit — and the Soviet effort to exploit Mr. Sanders’s antiwar agenda for their own propaganda purposes — have largely remained out of sight.

The New York Times examined 89 pages of letters, telegrams and internal Soviet government documents revealing in far greater detail the extent of Mr. Sanders’s personal effort to establish ties between his city and a country many Americans then still considered an enemy despite the reforms being initiated at the time under Mikhail S. Gorbachev, the Soviet general secretary.

They also show how the Kremlin viewed these sister city relationships as vehicles to sway American public opinion about the Soviet Union.The Sanders campaign didn’t dispute the documents’ authenticity; the English-language documents were shared with the campaign and the relevant Russian documents were described. At the time of Mr. Sanders’s announcement in 1987 that Burlington would seek a Soviet sister city, several dozen other American cities already had such a relationship or had applied for one.

The documents, available at the Yaroslavskaya Region State Archive in Yaroslavl, are included in a file titled “documents about the development of friendly relations of the city of Yaroslavl with the city of Burlington in 1988.”

Mr. Sanders’s involvement in the Cold War debate grew in the 1980s as he forcefully opposed the Reagan administration’s plans to have Burlington and other American cities make evacuation plans for a potential nuclear war.

Instead, Mr. Sanders reached out to the Soviet Union via an organization based in Virginia, requesting a sister-city partnership with the Cold War adversary in an effort to end the threat of nuclear annihilation. In December 1987, the records show, Mr. Sanders spoke by phone with Yuri Menshikov, the secretary of the Soviet sister-city organization in Moscow. In a follow-up letter later that month, Mr. Sanders said he had received word that Yaroslavl would be an ideal partner. He proposed leading a Burlington delegation to Yaroslavl to lay the foundation for a sister-city relationship.

He suggested arriving on May 9 — the day that the Soviet Union celebrated its victory over Nazi Germany — and said he was especially interested in discussing economic development, the police, winter street cleaning, libraries, and plumbing and sewer systems. “People there seemed reasonably happy and content,” Mr. Sanders told reporters in Burlington about Yaroslavl, a city of about 600,000. “I didn’t notice much deprivation.”

Two days after returning to Vermont, Mr. Sanders wrote to the Soviet Embassy in Washington, asking for help in setting up the sister-city program.

“It is my strong belief that if our planet is going to survive, and if we are going to be able to convert the hundreds of billions of dollars that both the United States and the Soviet Union are now wasting on weapons of destruction into areas of productive human development, there is going to have to be a significant increase in citizen-to-citizen contact,” Mr. Sanders wrote. The sister city program was something of a capstone to nearly a decade’s worth of foreign policy activism in Burlington City Hall. As mayor, Mr. Sanders championed a range of international causes that often aligned him with left-wing movements and leaders in other countries, and against the Reagan administration, which he described as pursuing a strategy of military escalation that risked setting off a nuclear war.

Mr. Sanders pressed the city government to take positions against American intervention in Nicaragua and El Salvador, and against the invasion of Grenada. In 1985, he visited Managua for the sixth anniversary of the Sandinista revolution and met with its leader, Daniel Ortega. To read the full article from the NYT’s, click here.

Just a lil more from Politico:

Bruce Seifer, a top economic development aide to Sanders when he was mayor, said that 100 residents from Yaroslavl immigrated to Burlington after the trip and others visited.

“Over time, it had a positive impact on to the economy,” he said. “Businesses started doing exchanges between Burlington and Yaroslavl.”

Davitian, who lived in Burlington at the time, said progressives were thrilled by Sanders’ trip to the Soviet Union, while everyday residents didn’t mind. “As long as the streets were getting paved, there wasn’t opposition to him as an activist mayor,” she said.

At the same time, they admit the poor choices of available food. Sanders says he was impressed by the beauty of the city and Soviet officials’ willingness “to acknowledge many of the problems that they had.”

“They’re proud of the fact that their health care system is free,” he says, but concede that the medical technology is far behind that of the United States.

Later that year, the relationship was officially established. Since then, “exchanges between the two cities have involved mayors, business people, firefighters, jazz musicians, youth orchestras, mural painters, high school students, medical students, nurses, librarians, and the Yaroslavl Torpedoes ice hockey team,” according to Burlington’s city government. A delegation traveled there as recently as 2016.

One last thing from National Review to consider:

Sanders made further globe-trotting expeditions to socialist countries. He visited Cuba, scoring a meeting with Havana’s mayor. In 1985 he attended the celebrations marking the sixth anniversary of the Sandinista revolution in Nicaragua. “In a letter addressed to the people of Nicaragua, penned in conjunction with that trip, Sanders denounced the activities of the Reagan administration, which he said was under the influence of large corporations,” the Guardian notes. “In the long run, I am certain that you will win,” Sanders wrote, “and that your heroic revolution against the Somoza dictatorship will be maintained and strengthened.” (The Sandinistas were ousted by Nicaragua’s voters in 1990).

Sanders isn’t the only radical U.S. politician to have a weakness for Communist dictatorships. In 2013, Bill de Blasio was caught off guard during his campaign for New York mayor when a Cuban-American radio host challenged him about Castro’s regime.

Ino Gómez, who fled Cuba in 1970, asked de Blasio in an interview about what he was thinking when he chose to violate U.S. law and spend his honeymoon in Cuba in 1991.

“What did you see in Cuba? What is your impression going on a honeymoon in a country that hasn’t had free elections in the last 50 years? What did you get from that trip?” Gómez asked.

A defensive de Blasio sputtered: “I didn’t go on a trip to study the country. I don’t pretend to have full perspective of the country.” He then acknowledged Cuba is undemocratic but praised “some good things that happened — for example, in health care.”

Gomez was having none of it. “I just had to send my aunt in Cuba some, you know, the thread to have stitches, because they don’t have in Cuba the thread,” he told the future mayor of Gotham.

De Blasio chose not to reply and the host moved on to other topics, giving him a pass on his 1988 trip to Nicaragua in support of the Sandinistas. 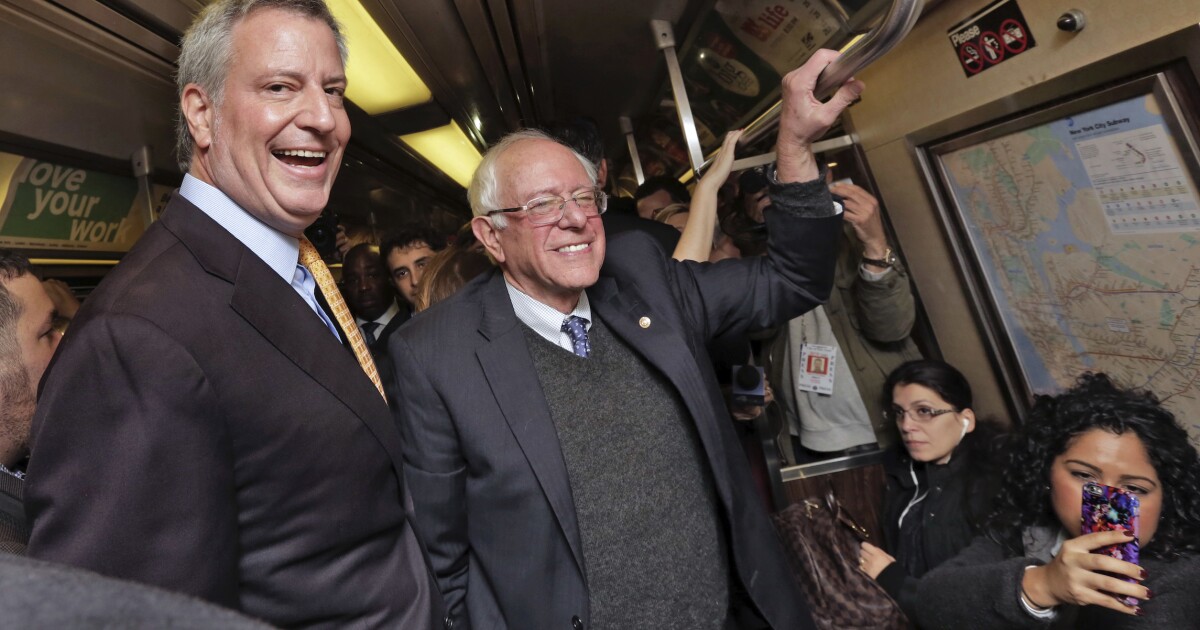 In closing, remember that New York Mayor de Blasio is campaigning for Sanders… gotta wonder if all this is well known to the gigantic grass-roots operation Sanders has built for his presidential campaign. 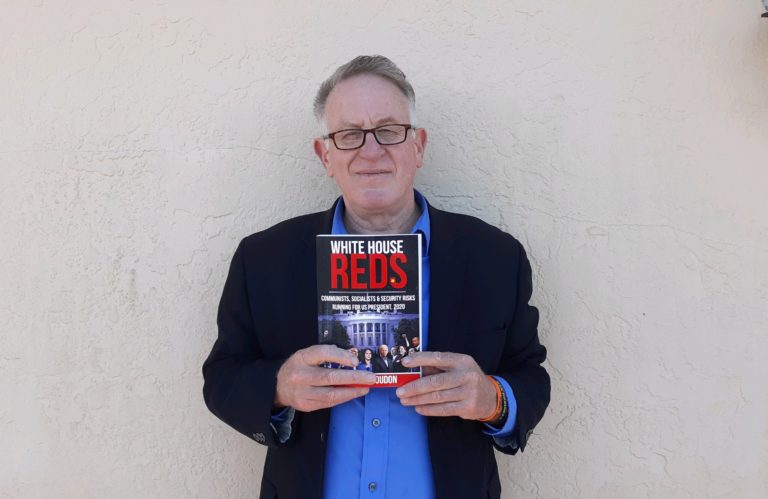 All orders through this website will be personally autographed by author Trevor Loudon.

The Democratic field has narrowed to Sanders and Biden. According to most commentators, Bernie is a socialist and Biden is a moderate. In my new book “White House Reds: Communists, Socialists, and Security Risks Running for US President, 2020,” you will discover that Biden is as bad as Bernie – and in terms of national security, much worse.

You need to know about Joe Biden’s life-long affiliation to the most insidious organization in Washington DC – the Council for a Livable World.

Founded by a Marxist and alleged Soviet agent Leo Szilard, the Council has worked to gut the US military for more than 50 years. Weapons systems have been canceled, key defense projects de-funded and hugely disadvantageous treaties have been negotiated with the Soviet Union/Russia – all to the benefit of America’s most deadly enemies.

Joe Biden owes his election to the US Senate in 1972 to a protege of Soviet agent Armand Hammer named Al Gore, Sr. a leader of the Council for a Livable World. Biden continued his collaboration with the organization while chairing the Senate Foreign Relations Committee and during his eight years as US vice-president.

Working with the Council for a Livable Joe Biden has done more damage to the US military than any major army could hope to accomplish. Biden’s service to the world revolutionary movement would make Bernie Sanders blush.

If you’d like a special message included please email it to [email protected] after you place your order.