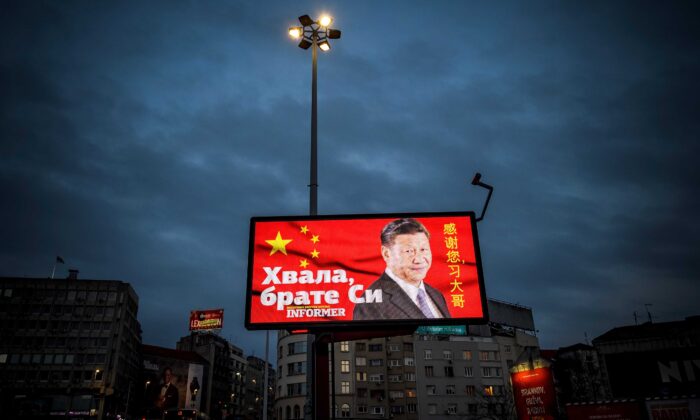 A billboard shows the Chinese leader Xi Jinping with the words “Thank you brother Xi,” a message paid for and by a pro-government tabloid, in Serbia on March 30, 2020. When six Chinese doctors landed in Belgrade two weeks before, Serbia’s president greeted them with elbow-bumps before laying a kiss on their regime’s flag, a gesture that sent Chinese social media aflutter. These doctors are now running the Balkan state’s COVID-19 strategy, as Serbia becomes a willing theatre for Beijing’s “mask diplomacy.” For weeks China has been showering European countries with millions of poor quality face masks, inaccurate test kits and other forms of “aid,” recasting itself as the hero in the battle against the coronavirus. (Andrej Isakovic/AFP via Getty Images)

The Chinese Communist Party (CCP) has initiated an open letter calling on its allies and vassal parties across the globe to rally around Beijing and to exploit the CCP virus crisis to advance the international socialist cause.

On April 2, the website of the International Department of the Central Committee of the Communist Party of China published an “Open Letter calling for closer international cooperation in the fight against COVID-19.” According to a same-day report on CCP propaganda outlet Xinhua, at least 230 political parties from over 100 countries had already endorsed or re-published the letter.

While minimizing the seriousness of the virus for domestic consumption, the CCP strategy is to massively exaggerate the problem internationally. The CCP open letter calls the disease outbreak “the most urgent and serious challenge”—perhaps the CCP itself might better fit that description?

“Today, as Covid-19 is spreading rapidly across the globe, it constitutes the most urgent and serious challenge to both the health of humanity and world peace and development.

The letter, openly initiated by the CCP, then calls for “coordinated policies” and “mobilization of resources and forces globally” before indulging in some shameless self-praise:

“We are aware that the virus respects no borders, and no country can respond to the challenges alone in the face of the outbreak. … Closer international cooperation, coordinated policies, concerted actions, and mobilization of resources and forces globally will enable us to defeat this virus, a common enemy to all of humanity.

“We take note of the significant progress in the fight against Covid-19 in China, … which has bought time and offered experience to the rest of the international community. We highly commend countries including China for adopting an open, transparent and responsible attitude to disclosing related information in a timely fashion, sharing experience on response and patient treatment, and in particular providing medical and other supplies to the best of their ability to other affected countries. …”

“We stand firmly against all discriminatory comments and practices against any country, region or ethnic group, and call on governments of all countries to take proactive measures to protect the health, safety and legitimate interests of foreign nationals and students they host. …

“We are of the view that the Covid-19 outbreak has laid bare the need for all countries to further foster the global governance outlook of achieving shared growth through discussion and collaboration and to support the leading role of the United Nations and the World Health Organization in global public health governance. We call for all parties to enhance coordination and cooperation within the framework of the G20 and other international mechanisms for effective international prevention and control as we strive to build a global community with a shared future for public health.”

To date, the CCP has not published a list of the 230 signatories “from major political parties.” This could be because many of them aren’t “major” and most of them are communist.

Significant political parties are known to have signed on to the CCP letter so far include the ruling Communist Party of Cuba and the Communist Party of Nepal. The South African Communist Party, which semi-governs that country in partnership with the African National Congress, has endorsed the letter. The often-ruling and openly communist Progressive Party of the Working People of Cyprus also signed on.

Granma, the newspaper of the Cuban Communist Party, used the CCP open letter as a vehicle for promoting socialist globalism, defending the CCP, and increasing international communist coordination:

“The text, signed by 230 political parties from over one hundred countries, recognizes that the COVID-19 has put the world in front of the most pressing and serious challenge to human health and peaceful global development. …

“Aware that the virus knows no borders, the signatories said that no country is capable of dealing with it on its own, and therefore called for the pooling of resources and forces at the global level through international cooperation, integrated policies and coordinated actions.

“They recognize nations, including China, for their open, transparent and responsible attitude in publishing epidemiological information and sharing experiences in prevention and treatment, especially for their assistance with medical supplies to affected countries. …

“The signatories also committed themselves to maintain close communication at this unique juncture, to give impetus to the battle against the epidemic, honoring their guiding political role.”

The Communist Party of Britain-affiliated newspaper “Morning Star” used the open letter as a springboard to praise the CCP and its Russian and Cuban allies—while strongly attacking the United States:

“China, Russia and Cuba have been among those countries leading the fight, sending medical teams and aid to places most affected by the pandemic. …

“But the US has been accused of acting as a ‘Wild West bully’ by blocking essential medical aid to Cuba and sending warships towards Venezuela.

“Washington has increased sanctions on Iran, preventing it from buying medical supplies on the global market, and ratcheted up an anti-China propaganda war that critics have described as a ‘smokescreen’ to deflect from US failures.”

The CCP’s harnessing of the world communist movement to take advantage of the CCP virus pandemic should not be minimized.

While most of the 230 parties are no doubt small, all will have an important influence in the more than 100 countries they represent. Some are ruling parties with all of the weight of their states behind them. Others have control over local labor union federations, women’s and youth alliances, academia and religious bodies. All are part of the largest coordinated political movement existing in the world today.

The West is already at war with the CCP and its allies. Their goal is to create social havoc, drive the economies of the West into the ground, and gut U.S. military spending. When that happens the CCP, Russia, Iran, and Cuba will run this planet.

Today, we are in a mainly informational conflict—with one side hardly fighting. If the CCP is allowed to win this stage of the war, the West will be in no position to resist whatever comes next.