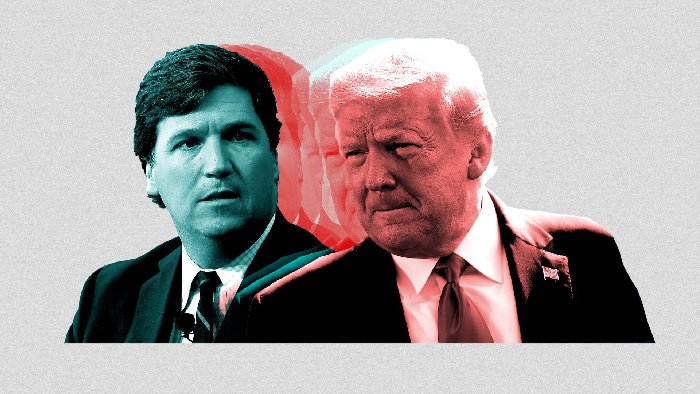 A story ran under a headline on Canada Free Press claiming that  Tucker Carlson, the independent conservative who just recorded the highest ratings in cable television history, had said President Trump would drop out of the presidential race. That was false. He had simply raised legitimate questions about President Trump’s reelection chances.

The author of the 2018 book, Ship of Fools, about how the failures of the political establishment led to the election of Trump, Carlson is the new voice of the forgotten American. He’s urging Republicans to the return to the themes that got Trump elected.

His book cover shows Democrats, along with Jeff Bezos and Mark Zuckerberg, being joined by Republicans Mitch McConnell and Lindsey Graham and Never Trumper Bill Kristol, leading the Ship of State to oblivion. The subtitle, “How a Selfish Ruling Class is Bringing America to the Brink of Revolution,” has taken on a different meaning, as the ruling class is now orchestrating a revolution against Trump. “Make no mistake,” Trump said at Mount Rushmore, “this left-wing cultural revolution is designed to overthrow the American revolution.”

Canada Free Press is one of those Rah! Rah! Sis! Boom! Bah! outlets which prefer to believe that anything negative about Trump or his campaign is designed to sink his chances in November. Carlson sees things differently. His honesty is what has propelled him to the top of the cable TV charts. He is not a brownnoser. If you can believe it, he actually had the audacity to criticize the Marxist Black Lives Matter movement. This is why Fox News is under left-wing pressure from advertisers to drop Carlson’s show. As the ratings show, the public is rallying around him and calling for more.

Carlson is willing to “tell it like it is,” even if some of the targets are one-time favorites of his conservative audience.  In response to his criticism, Senators James Lankford and Ron Johnson withdrew a proposal to replace Columbus Day with Juneteenth. Under fire from Carlson, Senator Mike Braun backed away from a proposal allowing frivolous lawsuits against police.

Carlson is the new Donald Trump, unafraid of what the elites say about him, and willing to take on those who cower in fear of the Big Media. He believes Senate Republicans are weak and afraid to take on important issues such as the cultural revolution being orchestrated by the elites against America. These Republicans curry favor with the likes of Bezos and Zuckerberg and don’t come to the aid of their voters.

Mike Reagan, the eldest son of the former president, quoted the Fox star as saying, “The core appeal of Trump was if things ever started to fall apart, he would defend you. Yes, he was loud and crude. Most bodyguards are. Only a man like Donald Trump was tough enough to fight the creeping authoritarianism of the education cartel and corporate America.”

In 2016, Reagan noted, Trump had a good message and good campaign staff. “In 2020,” he said, “he’s got a government-paid White House staff and a lavishly funded campaign apparatus that appears to only be effective at blocking attention to the issues that elected Trump.”

Part of the current problem is the influence of Karl Rove, former Deputy Chief of Staff to President George W. Bush. A big man in conservatism, at least at one time, Rove wrote, Courage and Consequence: My Life as a Conservative in the Fight, but drives the GOP to the left on cultural issues.

The fact that Rove, still a prominent GOP fundraiser, continues to write for the Wall Street Journal and remains a paid contributor to Fox News is an illustration of the problem. Carlson knows Rove is overrated, having quizzed him back in 2016 about Rove’s erroneous prediction that Trump wouldn’t win the presidential election. Rove doesn’t understand the conservative base and what it takes to win.

Rove recently wrote a Wall Street Journal article about troubles in the Trump campaign called “The Trump Campaign Needs to Hit ‘Reset’.” But some have been arguing that the “reset” should include dumping Rove as an adviser to Trump campaign manager Brad Parscale and reviewing the performance of Parscale himself.

Ignoring his own role in raising money for failed 2012 Republican presidential candidate Mitt Romney, Rove said that Obama had “succeeded in making 2012 a choice election” and that this kind of approach is what Trump needs. But it was Rove who advised Republicans not to call Obama a socialist. “If you say he’s a socialist, they’ll go to defend him,” Rove said. “If you call him a ‘far out left-winger,’ they’ll say, ‘no, no, he’s not.’” Rove said Romney had to remain “focused on the facts and adopt a respectful tone” toward Obama. That strategy ended in failure. As a result, many Republicans were not prepared for what came next.

Several current reports indicate that Rove has not only been advising Trump’s campaign for president but has been visiting the White House. It was a visit reportedly recommended by Senate Majority Leader Mitch McConnell, R-KY.

It’s in the Senate races that we also find Rove’s influence. Rove has personally been raising money for Arizona Republican Senator Martha McSally, a lackluster candidate who is one of many GOP Senators running for reelection in danger of losing their seats.

Offering advice to Trump, Rove says the president should start campaigning on issues like immigration, energy, and trade “before moving on to new topics.” But we are in the midst of a cultural revolution at the same time that Communist China has unleashed a virus on the United States and the world. This is a“new topic” that dwarfs everything else. Trump’s FBI Director Christopher Wray just gave a speech saying China intends on dominating the world. He said, “China is engaged in a whole-of-state effort to become the world’s only superpower by any means necessary.”

What’s more, China has been caught smuggling weapons into the U.S. and has links to communist groups in the U.S. engaged in disruptions, riots, and protests. This is not an ordinary campaign or moment in history.

Tucker Carlson’s warning about the stakes in November comes as Democrat Joe Biden promises to “transform” America, a call first made by his former running mate, Barack Hussein Obama. The rhetoric demonstrates that Biden is a shill for the movement that elected Obama. But that’s how Trump can win – by painting Biden as the frontman for a Marxist whose socialist transformation of America provoked the backlash that elected Trump in the first place.

If the debate is over socialism, globalism, and reinstating Obama’s China-friendly policies, at least the people will know what lies ahead. We can then prepare ourselves accordingly.