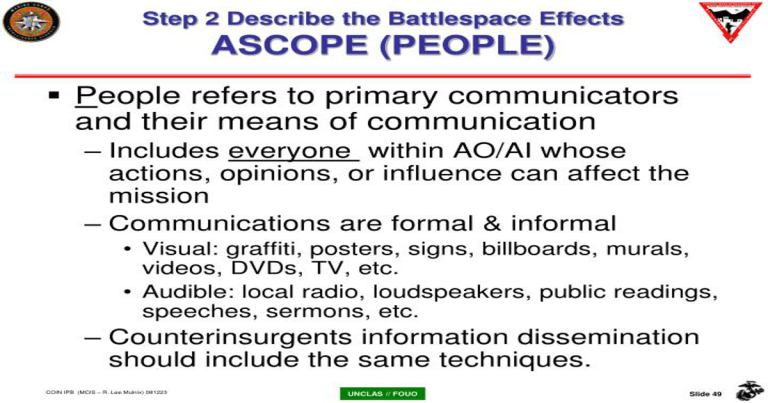 Going back as far as Sun Tzu’s The Art of War – circa 500 B.C. – military and political strategists have recognized the value of intelligence and propaganda in preparing for battle – and indispensable for that, preparing the field on which the battle will take place in order to maximize the odds of victory.

The “field of battle,” in turn, is not solely what we now call “kinetic,” involving the use of weapons on physical terrain.  Before, during and after a kinetic – and perhaps in lieu of kinetic conflict – the field of battle (or “battlespace” in the current lexicon) can involve the “hearts and minds” of an adversary population, and can even encompass an entire culture and its history (e.g., Cultural Marxism).

After all, if one can convince the adversary and its forces and people that “resistance is futile” – or even deserved (e.g., “systemic racism”) – one can win the war. Possibly without having to resort to kinetic measures at all, or just relatively minimal ones (e.g., Antifa).

We already know that the Deep State and its Democrat Party minions have attempted multiple coups in order to defeat President Donald Trump; first by preventing his election, and then attempting to expel him: Obamagate a/k/a Russiagate, followed by the impeachment Schiff-show.

Thus far their treasonous actions have been blessedly unsuccessful; the point is that it would be naïve to assume that such conspirators would not also work to form a coup to prevent his reelection.

In fact, it would be out of character for that evil kind, who now would be even more motivated to commit treason, since under a second Trump administration they likely (and deservedly) face severe forms of justice for their previous coup attempts (not to mention previous acts of immoral, unethical and criminal kinds).

Meanwhile, the risks if they execute a coup-like scheme to steal the election are manifold, including civil war.  This civil war may not involve secession of states, but patriots, American citizens rising up as counter-revolutionaries defending our Constitution from the coup plotters.

This is not hyperbole.  It is now inarguable that the Democrat Party is masquerading as a venerable and legitimate political party, yet serving as a front for revolutionaries – revolutionaries who are playing for all the marbles.

The ultimate identity and goals of the puppet-masters behind the revolution may someday become public.  Some believe them to be Marxists (Communists / Socialists).  Others believe that they are secretive, elite financiers pushing a globalist “new world order,” for whom the Marxists (Antifa / Black Lives Matter / Democrats) are mere tools, mere classic “useful idiots.”

This writer leans toward elite financiers intending a hybrid Progressive-Fascist (i.e., Corporatist) model controlling the entire globe.  One in which they control the multinational banks, multinational corporations and unelected NGO’s – that will “sustainably” control the global population in a reprise of feudalism, albeit “high tech” feudalism.

No matter who is controlling the revolutionary agenda, no matter their ultimate aims, our nationalist President Trump presents an existential threat to their plans – just as the continued existence of our Divinely-inspired nation as-founded presents an impenetrable roadblock to their (ultimately Satanic) plans.

So how do we know that they’re planning on stealing the election, and what might be their plan to accomplish that?

Engage people with what they expect; it is what they are able to discern and confirms their projections. It settles them into predictable patterns of response, occupying their minds while you wait for the extraordinary moment — that which they cannot anticipate. – Sun Tzu, The Art of War

Well, they have to condition the public in advance to “accept” the rationales they offer for their desired election result – for if the result appears to be too implausible, questions will be asked, and the resulting doubts may propel the counter-revolutionary forces.

But by engaging in this advance conditioning, they’ve had to compromise some operational security – and not just by their transparent push for universal mail-in balloting (that, as we’ll see, is but one element).

Start with July 20, 2020, and Nancy Pelosi’s not-even-cryptic comments about “fumigating” Donald Trump out of the White House, and her being “second” (sic) in line for the Presidency: HERE

Then consider two separate pieces that appeared online on August 3, 2020.  First, an opinion piece by Professor Jonathon Turley, in which he stated:

Trump objected that a shift to mail-in voting will cause delays and challenges after Election Day. I have covered presidential elections as a legal analyst for several decades; each election has had challenges, including the lingering controversy over the 2000 Bush-Gore contest ultimately resolved by the Supreme Court. While we have long used absentee balloting, we have not used mail-in voting on such a massive scale. It will, inevitably, add a new layer of problems and potential challenges. Trump also is right that it will likely delay the final counting of votes.

There is every reason to be worried. We have a relatively short window for challenges and recounts before the Electoral College meets on Dec. 14 to certify the results. While that date also could be changed, it would soon collide with another statutory date — Jan. 6 — when Congress must meet to certify the results. There is a real possibility for floor fights on the certification of the votes from given states and the possible failure to certify some states caught up in litigation.

It is even possible that such challenges could continue to Jan. 20. What is not in doubt, however, is Trump continuing in office: On that day, he is no longer president unless he is reelected.

Indeed, for Trump, the only thing more nightmarish than losing would be if no duly elected president can be determined. Pelosi could theoretically become the acting president as the next in succession.

In other words, Donald Trump would not be President, and Mike Pence would not be Vice President (Pelosi mentally lumping them together would explain her “second in the line of succession” error).

One result of the election simulation wargame involved an electoral college simulation in which President Donald Trump secures a strong electoral vote victory while losing the popular vote to Biden, who was played by the former Clinton operative Podesta.

Podesta refused to concede the presidential election in that scenario, citing what he maintained was voter suppression in Wisconsin and Michigan. Podesta, within the confines of the scenario, convinced the governors of the states to send the votes of pro-Biden electors to the House in an attempt to inaugurate Biden as President, despite losing the states.

Mass fraud through mail-in ballots would ensure that the “popular vote” went to Biden.  Moreover, who’s to say that once the matter is in the House, someone other than Biden or his running mate would be selected?  For example, could the House have a deliberate impasse so as to default Nancy Pelosi into the Oval Office?

Yes, it sounds audacious, even unbelievable.  But then, before being exposed, so too would have the Obamagate and impeachment coup attempts.

The Democrats’ long-established mantra of deriding the Electoral College while falsely portraying “winning the popular vote” as the “legitimate” form of victory is one of the rationalizations that they have been using to condition the public; the recent (obviously false polls) showing Biden being ahead is more conditioning intended to render “plausible” that idea that Biden could actually win the popular vote.

Not to mention that the (misnamed) “mainstream” media is already peddling supporting talking points for the scheme.  For example: HERE

To translate from Pelosi and media-speak: Donald Trump using legitimate legal means to contest the Democrats’ desired election results will constitute him “refusing” to leave the White House. Again, more of the advance conditioning of the public, so that the elements of the coup’s execution won’t suddenly shock.  (Similar to how Adam Schiff falsely characterized President Trump’s legitimately accessing the court system in defending against the fraudulent impeachment scheme as “obstruction of justice.”)

We must accept the reality that we are already engaged in a non-kinetic civil war – after which our Constitutional republic will prevail, or will perish. The possibility remains that before the final outcome is determined, this civil war could go kinetic. God willing, we patriots will save our nation, and without a kinetic battle. Coupled with prayer, there is a way.

For the evil side’s electoral coup to ultimately succeed, it is critical that the rationalizations and fabrications being propagated to support it be seen as plausible by a critical mass of the people.  We are able to thwart that, and perhaps cut the coup off at its knees!

The wider the sharing of our suspicions and the sound reasoning behind it – particularly if we proactively do so before the election, so that our efforts aren’t portrayed as “bitter loser” conspiracy theories – the harder it will be for the Democrats to achieve a critical mass of the gullible.  Indeed, with enough light thrown upon their schemes, they might even be forced to abandon them altogether.

The supreme art of war is to subdue the enemy without fighting. – Sun Tzu, The Art of War

So, for our Constitutional order to be saved, we must alert as many people as possible to this (at present) unprovable, but very probable Democrat-Deep State plot.  In this way, we might win without a battle (much less a second kinetic civil war).

I am the author of the book Communiqués From the Vast Right-Wing Conspiracy – available on Kindle ($2.99) and in paperback ($12.99). Please consider supporting my work by reading and posting a review on Amazon. Thank you.