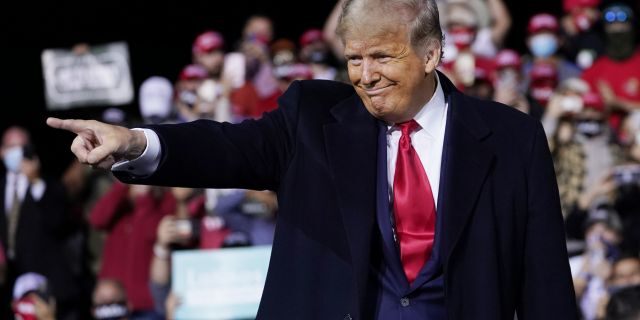 The “conservative” who vouched for the honesty and professionalism of Russia-gate prosecutor Robert Mueller has recommended that President Trump NOT appoint a replacement for Ruth Bader Ginsburg before the election. Fortunately, Trump is ignoring the advice from former federal prosecutor Andrew McCarthy.

In a piece for National Review and Fox News, McCarthy called on Trump to refrain from nominating a replacement and instead use the vacancy as an issue in his campaign for president. He said, “…the fact that the president has the power to name a replacement for Justice Ginsburg and that Republicans have a majority to get the nomination approved does not necessarily mean that that’s the smart play.”

McCarthy was trying to play the role of “smart” guy – smarter than Trump. It wasn’t convincing.

Trump has wisely rejected this approach and indicates he will nominate a replacement in the next few days.

McCarthy is the writer who said Robert Mueller was a fine choice as Russia-gate prosecutor. He said, “Bob Mueller is a widely respected former prosecutor, U.S. attorney, high-ranking Justice Department official, and FBI director. He is highly regarded by both parties…He is a straight shooter, by the book, and studiously devoid of flash.”

How did that turn out? McCarthy later changed course, admitting Mueller’s probe was political and designed to destroy Trump. In fact, McCarthy wrote a book about the bad job Mueller did.

McCarthy was wrong about Mueller and he’s wrong about replacing Ginsburg. He is a weak and timid advocate for conservative values.

McCarthy wagered “that a determined Republican effort to replace Ginsburg in the coming weeks would increase the chance that Biden defeats Trump, and that Democrats take the Senate while holding the House. If that happens, Democrats will repeal the filibuster, add four to six seats to the Supreme Court, and pack it with liberal ideologues. Whatever benefit will have been achieved by confirming a Trump nominee will be overwhelmed.”

He argued that, “The best play, particularly if Republicans lack the Senate votes they need anyway, would be to use the vacancy as a core issue in the 2020 campaign.”

It’s hard to know if Republicans have the votes to confirm a replacement. They have a 53-47 margin. If they lose some Republicans, perhaps some Democrats will come over to their side.  If they fail, at least they’ve tried. If they fail, Republican voters will know that Trump tried and that he was betrayed.

But at least Trump would have tried, and this is the course he’s chosen. That means he will nominate a replacement and we will have a hearing in which the real “legacy” of abortion of Ruth Bader Ginsburg will be exposed for all to see.

This is more bad advice from Andrew McCarthy, a major writer for conservative publications and a regular on Fox News. He has steered us down the wrong path before.

It appears that after he wrote this column, things changed, and it was updated. It now ends with this: “For now, President Trump is signaling (by tweet) that he intends in short order to announce a nominee to fill the vacancy left by Justice Ginsburg’s passing, and that he will push for Senate consideration. There is a good chance that he won’t get Senate consideration before the election . . . but that the nomination of a solid prospective justice, and the inevitable comparison of the kinds of jurists a Biden administration would appoint, will help the president’s reelection bid.”

So suddenly McCarthy changes from advising Trump to wait on a nomination to admitting that a replacement would “help” the president. This will have to go down as a major flip-flop in the history of policy reversals.

It was “emended,” which means to make corrections and clarifications.

What happened is that McCarthy was trying to guide the process and was completely ignored, so he changed gears.

Now we will be facing an endless series of articles about why Trump should have waited, and why his nominee may go down to defeat anyway. But by making this an issue of right to life versus the culture of death, Trump will win no matter what. It is a fight that has to take place. With more than 60 million abortions already in America since Roe v. Wade in 1973, America needs a “reckoning” on the matter of the meaning of life.

All lives matter. This is a real social justice issue.

The death of Ginsburg has made the sanctity of life into THE issue of the 2020 presidential campaign. Trump has wisely seized it.

Here, too, McCarthy misses the point, saying, “For all the Democrats’ hysteria about the purportedly imminent reversal of Roe v. Wade (that never happens), every time a conservative is appointed, the fact is that Republican judicial nominees are forces of stability who favor judicial restraint, enabling Americans to determine democratically how they wish to live.”

He neglects to mention that Roe v. Wade terminated the ability of the American people to decide by inserting a “right” to abortion in U.S. law and the Constitution. It’s not “judicial restraint” to keep that “right” where it does not belong. Roe v. Wade must be overturned.

In short, there is no “right” to terminate the life of another human being. Why can’t a “conservative” like McCarthy state the obvious? And if human life is in jeopardy, why wait?