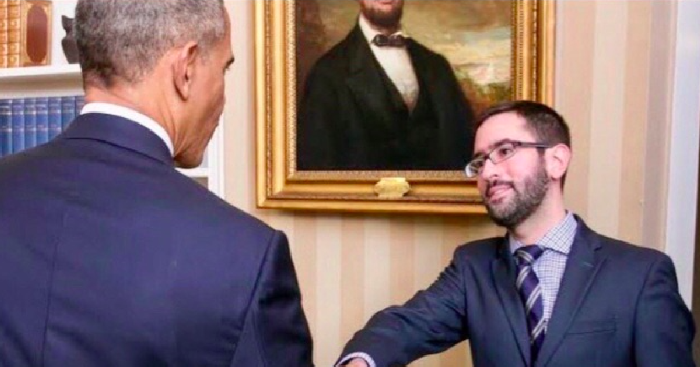 Eric Ciaramella, the National Security Council Director for Ukraine, is widely assumed to be Rep. Adam Schiff’s so-called whistleblower regarding President Trump’s July 25, 2019 phone call (a call that Ciaramella was not even on) with Ukraine President Volodymyr Zelenskiy. That “whistleblower” complaint began a series of events leading to President Trump’s impeachment and acquittal in late 2019 and early 2020.

It so happens that Ciaramella chaired a series of meetings at the White House and Old Executive Office Building, many with links to the radical leftist billionaire, George Soros, whose fingerprints can be found on everything from the collapse of national currencies to the election of equally radical prosecutors across the U.S. who are allowing our cities to be destroyed right before our eyes, and to the repeated efforts to remove the duly elected President Trump from office.

Criminal or unethical intent of the meeting attendees described below are in no way assumed or implied, but investigating Eric Ciaramella’s perhaps operational activities while a member of the otherwise think tank-like National Security Council is worthwhile.

During the first week of December 2015, Donald Trump began to establish a substantial lead over his Republican primary opponents.

Vice President Joseph Biden traveled to Ukraine to announce, on December 7th, a $190 million program to “fight corruption in law enforcement and reform the justice sector,” but behind the scenes, there was an apparent explicit link between a $1 billion loan guarantee and the firing of Ukrainian prosecutor Viktor Shokin, who had been investigating the energy company Burisma, which had as a paid board member Biden’s son Hunter.

At the time, the problem raised about the alleged Latvia-Ukraine-Cyprus money-laundering investigation, which had been ongoing up until December 2015, was that it would potentially involve the Bidens.

It is not unreasonable to assume that a decision was taken to shift the emphasis of the investigation away from the Bidens and in the direction of Paul Manafort and the Trump campaign.

According to White House visitor logs, on January 19, 2016, Eric Ciaramella chaired a meeting of FBI, Department of Justice, and Department of State personnel, which reportedly had two main objectives:

Again, according to White House logs, the attendees at the January 19, 2016 meeting in Room 230A of the Eisenhower Executive Office Building were:

Catherine L. Newcombe – an attorney in the Criminal Division, Office of Overseas Prosecutorial Development, with the U.S. Department of Justice

Andriy G. Telizhenko, a political officer in the Ukrainian Embassy in Washington DC

Just two weeks after that meeting, on February 2, 2016, according to White House logs, Eric Ciaramella chaired a meeting in Room 374 of the Eisenhower Executive Office, which seems to be a planning session to re-open an investigation of Paul Manafort (Note: one of the crimes of which Manafort was accused was money laundering, an area normally covered by the Department of the Treasury). The attendees were:

It appears that Paul Manafort became a vehicle by which the Obama Deep State operatives could link Trump to nefarious activities involving Russians, which eventually evolved into the Trump-Russia collusion hoax.

It is also no secret that George Soros operates through Non-Governmental Organizations (NGO) to influence national policies throughout the world.

It may be that Eric Ciaramella was acting as a coordinator of some Soros-linked efforts in Ukraine in parallel with U.S. government activities, in particular through the State Department’s U.S. Agency for International Development (USAID).

On March 16, 2016, Eric Ciaramella chaired a meeting of the following interconnected individuals and groups in Room 230B of the Eisenhower Executive Office Building.

April 15, 2016 – Eric Ciaramella met Sara E. Silverstein, assistant professor of history and human rights (for migrants) at the University of Connecticut, and Timothy D. Snyder, a historian specializing in the history of Central and Eastern Europe at Yale University.

The meeting took place in the White House Situation Room suggesting a requirement for secrecy.

June 1, 2016 – Victoria Nuland has a telephone conversation with George Soros and Yevhen Bystrystky, CEO of the International Renaissance Foundation, a Ukrainian NGO founded by George Soros.

The meeting took place in the White House Situation Room suggesting a requirement for secrecy.

There are several peculiar aspects to a meeting chaired by Eric Ciaramella on September 7, 2016, in the Eisenhower Executive Office Building. All seven invitees signed in between 1:14-1:17 PM for a scheduled 1:30 PM start. Based on the attendees’ expertise, the meeting’s topic was likely Ukraine.

Based on available public information, the professional roles of the attendees have been analyzed.

Michael D. Jarvis became Executive Director of the Soros-funded Transparency and Accountability Initiative in June 2016. He was previously with the World Bank Group working on corporate responsibility issues, anti-corruption, private sector roles in development, and multi-stakeholder governance. Jarvis is a specialist in the oil, gas, and mining sectors. George Soros is said to have “extensive business interests in Ukraine,” a country with large oil and gas industries.

Natalia O. Lassowsky is believed to be of Ukrainian extraction and was an employee of the National Security Agency, with whom she holds a patent.

Bailey S. Holladay is a U.S. Air Force-trained, likely Russian, linguist, and presumably, an analyst for the National Security Agency, based on her published associates and areas of expertise.

Stafanie L. Stagg is a name that appears in the Washington DC area, but her affiliation is yet undetermined, presumed to have been with the National Security Agency or an intelligence-related organization in some way dealing with Ukraine, based on the nature of Ciaramella’s meeting. A request for verification has not been answered.

“Donald M. Camp” is likely LTG (ret) Donald M. Campbell, former commander of USA EUR during the Ukraine-Russia conflict and the seizure of Crimea. He also has a background in Cyber and is now an independent consultant for Blackwater Agency/Protection, according to his LinkedIn resume.

On December 9, 2015, Ciaramella held a meeting in Room 236 of the Eisenhower Executive Office Building with Daria Kaleniuk, executive director of the Ukrainian Anti-Corruption Action Center, which was 59%-funded by Barack Obama’s State Department and the International Renaissance Foundation, a George Soros organization.

Also attending that meeting was Catherine Newcombe, an attorney in the Criminal Division, Office of Overseas Prosecutorial Development, with the U.S. Department of Justice, where, among other duties, she oversaw the Department’s legal assistance programs to Ukraine. The other meeting took place on March 16, 2016, and described above.

With John Durham’s investigation into the origins of the Russia-collusion hoax apparently nearing an end, and the report released this week by Senators Ron Johnson and Chuck Grassley into Hunter and Joe Biden’s potential conflicts of interest regarding Ukraine, Russia, and China, these meetings involving Eric Ciaramella take on new meaning in the ongoing Deep State efforts to overturn the last election. If Joe Biden becomes President and the Democrats take control of the Senate, investigations into how these stories overlap and relate to each other will come to an end.

Colonel Sellin is a member of the Citizens Commission on National Security.