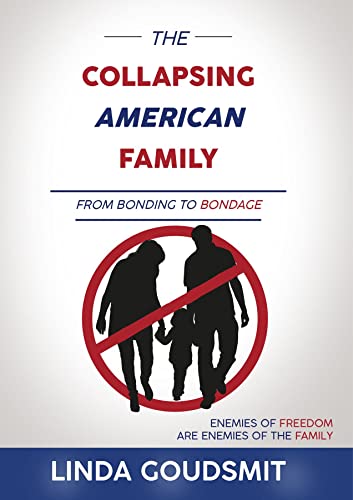 I am thrilled to announce the release of my new book, The Collapsing American Family: From Bonding to Bondage. The book exposes the sinister attack on the nuclear family as the primary strategy in globalism’s asymmetric warfare on America. The family presents a competing ideology that must be destroyed in order to collapse America from within and impose the Great Reset of technocracy and transhumanism. The “New Normal” replaces family bonding with feudal bondage in the global Managerial State where you will own nothing and be happy. Globalism’s war on America is psychological warfare, an information war fought without bullets.

I am including the book’s introduction and hope you find it helpful. I believe that it is impossible to solve a problem without understanding the problem. My goal is for people to understand that we are in a worldwide war between globalism and the nation-state, and we must resist to preserve our freedom. The book is available in paperback, hardback, and ebook online at Amazon and Barnes & Noble Additionally, it can be ordered from any bookstore anywhere in the world.

Kahlil Gibran, the gifted Lebanese-American poet, philosopher, and artist, writes about family in his 1923 masterpiece, The Prophet. In the book, the prophet describes the role of parents:

You are the bows from which your children as living arrows are sent forth.

The archer sees the mark upon the path of the infinite, and He bends you with His might that His arrows may go swift and far.

Let your bending in the archer’s hand be for gladness:

For even as He loves the arrow that flies, so He loves also the bow that is stable.

Gibran’s poetry captures the American Judeo-Christian ideal of family love, growth, independence, and continuity. His exquisite image of the archer and bow is an iconic depiction of idealized parenthood—the preparation and exemplary launching of children into adulthood. The stillness of the archer’s pose contrasts with the perpetual motion of the children being launched into the future, becoming parents who will prepare their own children for adulthood in the magnificent, ongoing cycle of life.

Family is the most fundamental, universal, and powerful social structure in human society. America was founded on the infrastructure of the nuclear family—a man and a woman and their children. Parents providing for, protecting, and preparing their children for a future in a free society. The nuclear family is the source of family love, family loyalty, and family appreciation for the unparalleled individual freedoms guaranteed by our U.S. Constitution.

The nuclear family is the foundation of American freedom, American ideals, and American morality rooted in the Judeo-Christian tenets of the Ten Commandments. Family is the supporting structure that provides stability and continuity for the American Constitution, American sovereignty, and the American dream.

My purpose for writing this book is to expose the multidimensional, coordinated attacks on the American family as strategic, operational, tactical, asymmetric warfare.