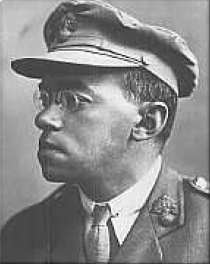 On Wednesday evening, August 18th, several hundred people gathered at the Park East Synagogue on Manhattan’s Upper East Side for a most befitting tribute to the life and legacy of famed Zionist leader and visionary, Vladimir Ze’ev Jabotinsky on the occasion of his 70th yahrzeit. Due to the geo-political realities of the age of terrorism, security was tight at the venue as attendees went through airport style checks as they entered.

Sponsored by the Americans For a Safe Israel organization which has enduring roots in the Jabotinsky movement, the evening began with an introduction by AFSI chairman Herbert Zweibon who spoke of his organization’s efforts towards educating future generations of Israeli youth about Jabotinsky’s life and prescient teachings. “We have sponsored essay contests in Israeli high schools on what Jabotinsky stood for and we are proud to say that his legacy has now been incorporated in the high school curriculum,” Mr. Zweibon said.

Born in 1880 in Odessa, Russia, the young Jabotinsky studied law and served as a correspondent for several well­ known Russian newspapers. His reports and articles were widely read and he soon became recognized as one of the brilliant exponents of Russian journalism. All his reports and articles were signed with his literary pseudonym “Altalena.” It was the fatal consequences for Jews during the Kishinev pogroms of 1903 that served as the catalyst for Jabotinsky’s lifelong commitment to the Zionist movement. As a staunch advocate for Jewish self-defense, he worked with the British mandatory regime in establishing the Zion Mule Corps in 1916 and the Jewish Legion in 1920.

Keenly cognizant of the fact that the creation of a Jewish state would only come to fruition through the dedication and tenacity of Jewish youth, Jabotinsky founded his beloved Betar Zionist youth movement in 1923, in Riga, Latvia. Named after the last fortress to fall in the Bar Kochba revolt against the Romans in 135 CE and dedicated to the memory of his friend Joseph Trumpeldor who died while defending the Tel Chai fortress in the northern Galilee against Arab attacks, Betar was to play a pivotal role in saving Jewish lives during the Holocaust and in ousting the British from Palestine.

Renowned author and political commentator, Rael Jean Isaac delivered the introductory remarks for Douglas J. Feith, the evening’s keynote speaker. “Doug Feith’s father was a member of the Jabotinsky youth movement, Betar in pre-World War II Europe, so it comes as no surprise that Doug has had a lifelong interest in Jabotinsky,” she said.

Mr. Feith is a former Under Secretary of Defense for Policy and served in this position from July 2001 until August 2005 in the Bush administration. He helped devise the US government’s strategy for the war on terrorism and contributed to policy making for the Afghanistan and Iraq campaigns. He also served as a Middle East specialist on the White House National Security Council and then as a Deputy Assistant Secretary of Defense. He is currently a Senior Fellow at the Hudson Institute, where he heads the Center for National Security Strategies.

“Few people are honored 70 years after their death”, intoned Mr. Feith, speaking of the unique and multifarious contributions of Jabotinsky to the Jewish people and the creation of the Jewish state. “Jabotinsky’s remarkable accomplishments and prescient ideas are still applicable today,” he continued, speaking of his perspective of the Arab/Israeli conflict. Jabotinsky was convinced that the Arabs could not be bought off with political concessions and in his essay entitled, “The Iron Wall” that was penned in 1923, he said: “Except for those who were born blind, they realized long ago that it is utterly impossible to obtain the voluntary consent of the Palestine Arabs for converting “Palestine” from an Arab country into a country with a Jewish majority. As long as the Arabs feel that there is the least hope of getting rid of us, they will refuse to give up this hope in return for either kind words or for bread and butter, because they are not a rabble, but a living people. And when a living people yields in matters of such a vital character it is only when there is no longer any hope of getting rid of us, because they can make no breach in the iron wall.”

While imparting a general overview of the life of Jabotinsky, Feith said that Jabotinsky was a “rational, pragmatic, non-Socialist Jewish nationalist who rejected the totalitarian nature of fascism and communism.” Mr. Feith spoke of Jabotinsky’s career as a journalist, a poet, a proponent for the revivification of the Hebrew language and a tireless fighter for Jewish statehood. During the dark days that presaged the Holocaust, Jabotinsky posited himself in the forefront of a campaign for Jewish survival. It was in Warsaw in 1938 that he told his Jewish audience, ‘liquidate the exile, before the exile liquidates you.”

“Jabotinsky viewed the creation of a Jewish state as a matter of life and death,” intoned Mr. Feith. “He was a man who combined erudition with action and as a result of his positions on Jewish resistance to subjugation and his campaign to form a Jewish army, he was unfairly smeared as a fascist,” he continued.

“Jabotinsky held a deep belief in the royalty of man; that we are all created in G-d’s image. He extolled the views of universal equality and individual liberty,” said Mr. Feith. Quoting from “Shir Betar,” the Betar youth movement anthem written by Jabotinsky, Mr. Feith said, “Even in poverty a Jew is a prince, whether slave or tramp, he was born a prince, crowned with the diadem of David.”

Ze’ev Jabotinsky’s final days were spent in Camp Betar in upstate Hunter, New York. It was there that he succumbed to a heart attack and died on August 4, 1940. He was buried in New Montefiore cemetery in New York rather than in Israel, in accordance with the statement in his will, “I want to be buried outside Palestine, may NOT be transferred to Palestine unless by order of that country’s eventual Jewish government.”

Initially, after the State of Israel was established, the government headed by Prime Minister David Ben Gurion did not make such a decision, but in 1964, shortly after becoming Prime Minister, Levi Eshkol ordered the reinternment of Jabotinsky and his wife in Jerusalem at the Mount Herzl cemetery. A monument to Jabotinsky remains at his original burial site in New York.

A friend of mine found a political cartoon regarding the building of an Islamic mosque near Ground Zero and posted it to his Facebook page along with his thoughts: “The debate is not about the law or the Constitution. I don’t think it’s even really about tolerance. The real debate is about respect, sensitivity and reverence.”

To me it’s more about building up Islam to replace Western values, a statement of occupation in a conquered land. The property is owned by a Muslim; but that isn’t the issue, nor is it about freedom of religion as many have argued. This is about power; the announcement by Islam to Western civilization that they have no respect for our culture and this is their flag of conquest.

It would be hard not to equate the historical significance of the chosen name for this planned insult. The great mosque in Cordoba, Spain was erected over what had been a Catholic basilica in the year 711 AD. It was the center of power for several centuries under Muslim rule until the year 1236 when Spaniards conquered Cordoba. The population and the building were converted from Muslim rule and the Catholic Church established in its place; however, the structure continues to exhibit its original Moorish design and construction to this day.

Here I am yakking away when all I really needed was the political cartoon; a picture really is worth a thousand words. I wish my eyes were better so I could give credit to the artist; perhaps someone will enlighten me via the comment section. 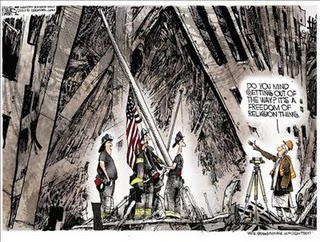 Update: Arfin Greebly points out the cartoon is by Michael Ramirez at Townhall.com…