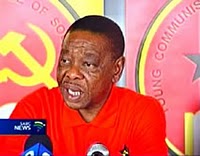 The Egyptian revolution has huge implications for Israel, the U.S. and what is left of the Free World.

In a column by George Galloway analyzing the Tunisian and Egyptian developments in the British ‘Morning Star’ – the daily newspaper of our sister party, the Communist Party of Britain – reference is made to Lenin’s apt observations about revolutions:

“There are decades when nothing happens, and weeks when decades happen”.

This basically captures a number of things about capitalism and its manifold crises today. Firstly, a political lull (or even accelerated growth and consolidation of capitalism) may actually be a prelude to sharp revolutionary outbursts that within a short space of time can radically change the history of a country or the world as a a whole. Secondly, the Tunisian and Egyptian political developments can be seen as an expression of a moment in the deepening crisis of capitalism and its contemporary neo-liberal ideology, whose outcome marks a significant shift not only for the peoples of North Africa and the Arab world, but whose significance is global…

As Comrade Fidel Castro wont to say, in his weekly reflections, the current global capitalist crisis is not only a financial crisis. But it is a multiplicity of capitalist crises, mutually reinforcing each other, but whose foundation is the unsustainability of a system that is based on the exploitation of the global (impoverished) majority to sustain the greedy interests of a small globalized (and increasingly globalizing) capitalist class.

The world today is facing a multiplicity of capitalist crises: the crisis of the global financial sector, an energy crisis, an oil crisis, a food crisis, and the crisis of climate change and global warming. Whilst it would be foolhardy to predict an imminent demise of the global capitalist system, nevertheless there are important qualitative shifts that are taking place marking the possible beginnings of a new global era. It is a global era that may for a while be characterized by uncertainties and instabilities in many parts of the world, not least economic instability in pockets of the advanced capitalist countries. This is likely to be accompanied by a wave of successive crises whose outcome will in the end be determined by the organizational capacity of the workers and poor of the world to seize the political initiative.

One thing is however certain: the current global capitalist crises, coupled with the emergence of alternative economic blocs from the developing world, as well as the energy of the mass of the people in places like Egypt and Tunisia, are all indications of the beginnings of the decline of the US as a global economic power!

The Egyptian revolution in particular has a huge potential to impact positively on the struggle of the Palestinian people against apartheid Israel’s tyranny and oppression. There is a real opportunity for the emergence of a progressive Egyptian state, freed from the yoke of US imperialism. Such a state has the potential to wage a principled struggle and solidarity with the Palestinian people. In many ways, progressive solidarity with the Egyptian revolution is necessary to deepen the struggle for an independent Palestinian state.

The SACP is hopeful that these revolutions in themselves with further galvanize the oppressed Palestinian people to intensify their struggle against apartheid Zionism and put the Israeli regime on the back-foot. The Egyptian revolution may possibly provide the much needed impetus to the Palestinian struggles by further exposing the ‘on and off’ US-Egyptian sponsored peace negotiations as nothing more than a façade to delay genuine Palestinian liberation, whilst the further dismembering and colonization of the Palestinian territories continues unabated. These developments, with the collusion of the Mubarak regime, are making it almost impossible to achieve an independent Palestinian state in the near future. The Mubarak government all along has been a perfect imperialist cover to delay if not frustrate the liberation of the Palestinian people.

“The sands of time have run out for the pharaoh. He may yet unleash rivers of blood in a bid to hold on. But this wind of change that blew sweetly firth through Tunis and now Cairo will not stop there”

What the above means is that it is incumbent on all progressive forces of the world to express concrete solidarity with these revolutions. It is also our fervent hope that this opening may create conditions for the long illegalized Communist Party of Egypt to strengthen and root itself in the current struggles of the Egyptian working class, as the only route to the radicalizaton of current struggles of the workers and poor in Egypt.

The SACP pledges its full support and solidarity to the Communist Party of Egypt, the broader Egyptian working class and the mass of the people of that country. These developments must indeed be seen as the blowing of the ideological and political cover of imperialism; and that the capitalist crises and their impact are not yet over, and perhaps their full impact are yet to be fully felt.

The Egyptian revolution is not about “democracy.” It is about an Anti-Western Egypt confronting Israel and controlling one of the world’s most strategic choke points, the Red Sea and the Suez Canal.

The Egyptian revolution is being viewed by the world communist movement as a major advance in the global revolution.

The budget submitted by Obama “will not be adding to the debt,” at least that’s the claim according to White House Budget Director Jack Lew in an article on Fox News’ website. Everything is fine; nothing to worry about and you can have that pony on your birthday too.

‘“The terminology that we use in Washington of primary balance is a little confusing,” Lew said.”

Lew could easily have said something like, “It’s not going to cost us any more because, as most of you know, folks in Washington don’t pay taxes, we collect them.” Wouldn’t that have been fun and closer to the truth?

Obama keeps diverting attention away from our nation going into bankruptcy, pushing for a warp speed rail system, one of those shovel ready magic bullet train things. Never mind that there is no money to pay for the train or those who would supply the labor. Maybe Obama plans to use slave labor like Germany did to build the Autobahn; only these slaves will be American taxpayers, some have yet to be born!

While you’re at it, Mr. President, my wife asked if we could upgrade her marginally proficient Toyota Solara to a Ferrari 458 Italia. Never mind that we have no roads around here to justify such an extravagance; it will make us feel more confident in our nation just having a car we can’t afford parked in the driveway. Our grandchildren will smile with envy knowing their college tuition money was used so meaningfully.

I listened to Mark Levin’s comments regarding Obama’s budget; thought it was as good a summary as could be made. The short video went under the title, Mark Levin Goes Nuclear Over Obama Destroying the Country. Why haven’t other folks gone “Nuclear,” like our Senate, our House of Representatives or mass media outlets? I’ll tell you why; the majority of our leaders lack the courage to stand up at this time, don’t care or are entrenched so deeply in “beltway mentality” they cannot be trusted.

Mark got it right; if this budget is passed our children, when they are in their 20’s, will be looking at paying somewhere between 60 to 80 percent of their earnings just on Federal Income Taxes. That doesn’t take into account State and local taxing authorities. We’ll be saddling future generations with a debt so large as to make it impossible for them to enjoy the American Dream…AND FOR WHAT? Our government will have become so oppressive, it won’t be recognizable from Marxist Russia.

The sinking feeling in your gut, that America’s God-given blessings are slipping away, wondering if life, liberty and the pursuit of happiness are being replaced with pure socialism; it’s no longer a “sneaking suspicion.” Obama’s promise of “Hope and Change” has been put in motion; how do you like the yoke of totalitarian servitude?

GOP SEN: They got on a bus and left the state!