*** I have not read the book, but Zombie’s review is priceless. Here’s an excerpt – make sure you read the whole thing. It gives a lot of insight into the word and mind games of the left. 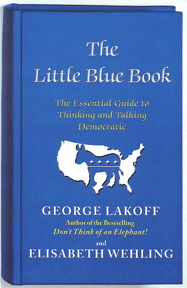 The Little Blue Book: The Essential Guide to Thinking and Talking Democratic, by George Lakoff and Elisabeth Wehling (Free Press, $11)

George Lakoff, Professor of Cognitive Science and Linguistics at U.C. Berkeley — and highly regarded Democratic tactician — has just released his playbook for the 2012 election. Titled The Little Blue Book: The Essential Guide to Thinking and Talking Democratic, it purports to be the ultimate insiders’ guide to liberal messaging and left-wing ideology.

Before you even open the book, its sly self-referential gamesmanship leaps off the cover: the very title itself is a wink-wink-nudge-nudge ironic-but-not-really reference to Chairman Mao’s Little Red Book, the kind of hidden-meaning secret message that progressives like to call a “dog whistle,” although they insist that only conservatives resort to such underhanded gambits.
Advertisement

Lakoff is also the brightest star in an impressive constellation of East Bay Liberati, most of whom (including Robert Reich and many others) happily lined up to blurb his new book. A small sampling from the press release:

Because everybody knows that the best way to convince undecided and conservative voters is to dazzle them with compliments you got from Van Jones and George Soros.

Read the whole thing – well worth the time…