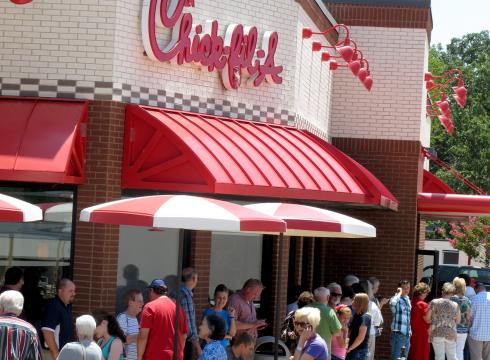 I jump on every opportunity to respectfully challenge my 84 year-old black dad’s loyalty to Obama. Dad has been a Christian pastor for over 50 years. He lives in Maryland and I live in Florida. I called Dad to ask if he participated in Chick-fil-A Appreciation Day. He said, no, he had not heard about it. Then, he added, “All I know is Chick-fil-A discriminates against gays.”

Folks, I was outraged. Struggling to keep my composure, I passionately said, “Dad, that is a lie! You have got to stop getting your news from the mainstream media!”

I went on to explain to my dad what the protest and appreciation day were really about. Dad was shocked. He does not support same-sex marriage. Dad was pretty grossed out when I told him that in retaliation homosexuals have planned a “kiss-in” at Chick-fil-A restaurants. http://www.cbsnews.com/8301-201_162-57480716/chicago-chick-fil-a-protesters-plan-kiss-in/

I also took the occasion to inform Dad that black pastors across America have organized to protest Obama’s support of same-sex marriage. Again, Dad knew nothing about the black pastor’s protest. http://www.youtube.com/watch?feature=player_embedded&v=8lxnz2qMbM8

At my local Chick-fil-A restaurant, Mavis and I were the only blacks there in support of the protest, amongst hundreds of white Christians and Tea Party patriots.

For the most part, conservative talk radio is a white thing. Even black conservative radio talk show hosts have a mostly white following.

How do we get the truth to black America? Since I am writing about this problem, one might assume I have a solution. Well, I do not and it frustrates me.

My conversation with Dad was yesterday. He called me at 9 AM this morning. “Why haven’t I heard about what Christians were doing in support of Chick-fil-A?” I told Dad the reason is because the mainstream media, where he gets his news, is in the pocket of the socialists/progressives who embrace same-sex marriage. The mainstream media (CNN, ABC, CBS and NBC) gave the phenomenon minimal coverage.

Dad was surprised to learn that all who oppose same-sex marriage are branded bigots and haters by his beloved Democratic Party and the mainstream media. Dad said he does not hate or judge anyone. However, the Bible says homosexuality is wrong. He must stand on the Word of God.

Patriots, my excitement was overwhelming. For years I have been waiting for the correct moment and approach to “respectfully” tell Dad that his blind loyalty to Obama and the Democrats contradicts everything he has stood for and taught me. The moment was miraculously here. Dad was on the phone, asking questions and listening.

My mind was racing, “OK! OK! How can I give him a history lesson and Conservatism vs Liberalism 101 in as few words as possible?” I thought, “Calm down and take it slow.” We talked for an hour.

Dad did not know that not only did Obama say that he supports same-sex marriage, but he vowed to be an advocate of the gay, lesbian, bisexual and transgender communities. http://www.youtube.com/watch?v=jiRllRPiij8 Dad told me to send him the link, which is pretty amazing, considering I have not been successful getting Dad to check his email.

Dad was unaware that the Democratic Party is considering making same-sex marriage a part of its platform. http://www.nytimes.com/2012/07/31/us/politics/democrats-draft-gay-marriage-platform.html

I explained to Dad that the mainstream media spins the truth and, in many cases, lies to support its socialist/progressive anti-Christian anti-God agenda.

For example: Dad heard from his media sources that Republicans, Christians and Conservatives are trying to ban contraception for women. Yes, Dad was familiar with the reported “War on Women.”

I told Dad no one is trying to stop women from obtaining birth control. Contraception is cheap – available at Walmart for five bucks. I explained that under Obamacare, Christian institutions and Christians will be forced to fund contraception and abortion services against their will and their faith. Again, Dad was shocked. Dad said he does not want to fund such services.

A majority of the Democratic Party leadership are far-left liberals who hate America and believe that man can fix every problem. God is an imaginary being clung to by ignorant, bitter and racist middle Americans. These Democrats believe they are intellectually superior – and thus far better-qualified to manage our lives. This is why the Democratic Party seeks ever-expanding governmental controls over our behavior. Outrageously, death panels in Obamacare even give government power to decide who lives and who dies.

In response to the socialists/progressives’ disbelief in God, Dad, a preacher for over 50 years, said, “Your house had a builder. I did not see him. Nor do I know him. But I know he exists. Man also had a builder.”

Dad ended our conversation with “I’m going to Chick-fil-A today to spend some money.”