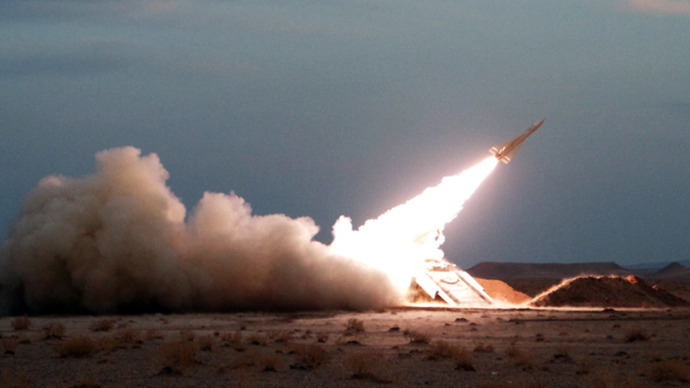 Iran is upping the war ante with a supposedly “massive” deployment of missile launchers just in time for their presidential elections next week. In an unsurprising, testosterone fueled show of claimed strength, these launchers are being dispersed to parts unknown and in numbers unknown. Two dozen trucks have been spotted without missiles at an outdoor site. These surface-to-surface missile launchers have a range of approximately 1200 miles and although Iran will not specify Israel as the intended recipient, I think we all know who these gifts are meant for. They can easily reach Israel and U.S. bases in the region.

We have been dancing with the Iranians for a while now. Between the UN pretending to threaten sanctions and Iran pretending to shut down the Straights of Hormuz, it’s a never ending game of nuclear chicken. The U.S. taunted the chicken with exercises employing carrier groups, each accompanied by dozens of support vessels and carrying more aircraft than the entire Iranian Air Force. But one day, that chicken will morph into a hungry wolf with a radioactive grin that will seek to devour their enemies, the world be damned if need be and praise be to Allah. 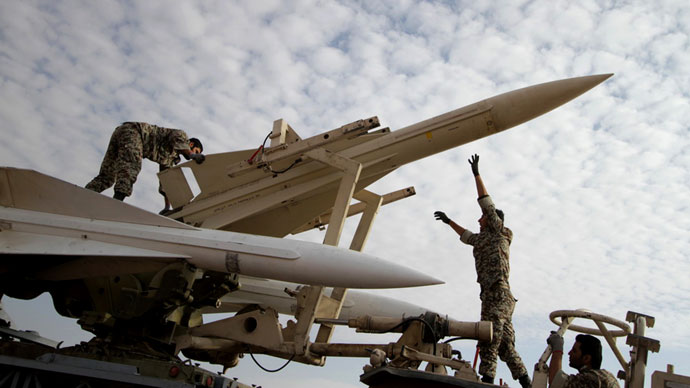 Earlier this month, the U.S. ruffled the chicken’s feathers with further exercises that involved 35 ships, 18 unmanned submarines and unmanned aircraft. We are also building a European missile defense system so that the Mullahs can’t put all the lights out in Europe permanently.

Iran has also been very naughty in cyberspace. They have been actively targeting our power grids. Turns out those whacky Iranians have been responsible for a wave of computer attacks on U.S. corporations, with the ultimate targets being oil, gas and electricity companies. Someone want to tell the Marxists in the White House we are already at war with Iran? They already know, no doubt, and are happy to let them attack us. Islamic Cloward and Piven by design. This has been going on for months by the way and not a peep in the media until last Friday when the New York Times posted on it. I wonder why now? They cited American officials and corporate security experts.

These attacks are sabotage and are meant to gain control of critical processing systems here in the States. They are trying to bring down the U.S. power grid and Obama is partying with celebs and golfing. Rome is burning… Senior Obama Administration officials began warning late last year that foreign enemies are looking to sabotage the U.S. power grid, air traffic control systems, financial institutions and other infrastructure.

While I am sure the Iranians would love to bring down our electrical grid, another part of me wonders over the fact that it is the Democrats that are screaming that we are under a cyber attack. “Never let a crisis go to waste,” and this would be the perfect excuse to control the Internet. I don’t know who to fear more, the enemies within or without… They are both evil to the core. Scratch that, the enemies within scare me more. Without their cooperation, the external enemies would be impotent.

Iran is set on war — they will have their bloody caliphate even if the whole world has to burn. I am not so sure our dear leader in the White House is not helping our enemies and is complicit either. Those missiles can easily reach Israel and with the King of Saudi Arabia being rumored to be ‘clinically dead,’ there is just enough chaos there to push the House of Saud out of the way and let the Iranians have their way with the full backing of Russia. Of course, that rumor comes from Iran, so it may not be worth anything. But who knows? There have been rumors for some time of the King’s poor health. I have no love for Saudi Arabia, but they were one of the lone stumbling blocks to Iran’s insane, murderous ambitions and have warned against a nuclear Iran for a long, long time. Iran has also just pushed Hezbollah into the war in Syria. As I write this, another rocket has been fired from Lebanon into Israel. Israel will fight back and so it goes. Israel has a right to survive and they are incredible fighters — there will be Islamic hell to pay.

Meanwhile, Russia is supplying weapons to Syria like candy. Obama is sharing secret love letters with Putin as well — they’re soul mates you know. Evil birds of a feather. We are sooo screwed – from Russia Today:

US President Barack Obama has received a personal response to his letter to Russian President Vladimir Putin: Moscow and Washington must work to overcome antagonism and deal with global political issues as partners, not foes.

The Russian Embassy in Washington, DC, stressed that the negotiations were conducted in a “business-like benevolent atmosphere, and were aimed at preparing further top-level contacts.” Both presidents will have their next face-to-face meeting on the sidelines of the upcoming 39th G8 summit in Northern Ireland on June 17 and 18.

If progress is made at the summit, Obama might then make a special visit to Russia ahead of the G20 summit in St. Petersburg in September. The deal between Moscow and Washington that could arise from such a visit – well before the end of the first year of Obama’s second term – would certainly give him “more flexibility,” as he told Russia’s then-President Dmitry Medvedev in March 2012, for the rest of his term.

In April, Obama sent an initial letter to Putin, delivered by Donilon during a visit to Moscow. Though never published, the letter reportedly contained a number of constructive proposals aimed at improving bilateral relations and cooperation on pressing global issues.

“Ideas covering some of the directions have new elements, which our country will study carefully and respond to accordingly,” Russian presidential aide Yury Ushakov said, referring to the letter’s contents.

Ushakov stressed that Russia’s position on missile defense generally does not converge with US plans to deploy the systems globally. “Of course, we give our assessment of the situation with the US plans for missile defense, and our estimates in many ways disagree with the American vision of this problem,” Ushakov told reporters.

While Iran strategically sets the global RISK board for WW III, the ruling elite conspire to rule the world and split the spoils. And as a bonus, they plan on getting rid of the riffraff and the inferior. Looks like our so-called leaders are bent on trying to finish what Hitler started, all arranged behind the scenes as they use other countries and communist and Islamic groups as puppets and useful idiots.

It’s a pity Obama hates Winston Churchill. He would do well to remember this quote:

“An appeaser is one who feeds a crocodile, hoping it will eat him last.” – Winston Churchill

Obama will be on the final menu no doubt. I share Dean Koontz’s sentiments on politicians:

“I wish they’d cross a crocodile with a poodle. I’d like to give a lot of politicians a crocapoo.” – Dean Koontz