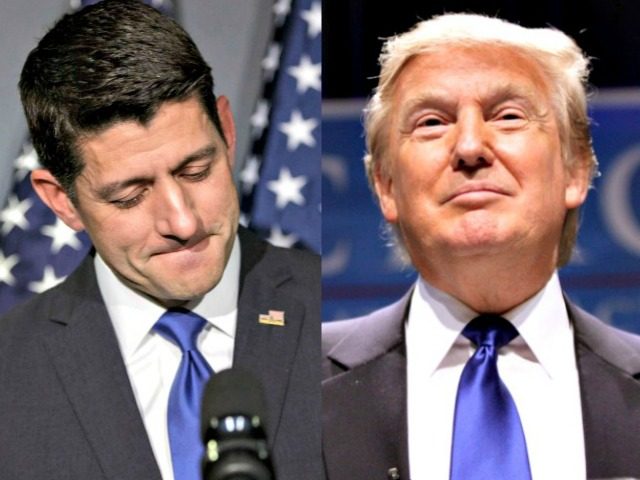 In refusing to endorse Trump, Ryan told Tapper, “…as a conservative, I want to see a verification that our conservative principles will be championed, will be run on, will be represented, and will be brought to the public in the country in a way that’s appealing for us to be successful.”

Ryan, who earned a degree in economics and political science at Miami University of Ohio, has been a member of the conservative movement for more than two decades. He worked as an aide to Senator Bob Kasten (R-WI) on the Senate Small Business Committee, did policy analysis at the think tank Empower America for former Congressman Jack Kemp (R-NY), and then served as legislative director to then-Congressman Sam Brownback (R-KS). He moved back to Wisconsin in 1998 where he ran for Congress and was elected. He was chairman of the House Ways and Means Committee and the House Budget Committee, and running mate for Mitt Romney in 2012, before being elected House speaker in 2015. His website describes him as a “committed conservative” who advocates “real solutions that will expand opportunity for all Americans.”

He told Tapper, “I think we sometimes forget just how successful we have been. We have the biggest house majority since 1928. We have 54 Republican Senate seats. We have state legislative majorities and governorships that we haven’t seen in years and decades. And so we’ve done extremely well. Our party is having, enjoying success because we’ve unified around common conservative principles, and we have one more hill to climb, one more mountaintop. That’s the presidency.”

Trump’s involvement with the conservative movement mostly consists of financial contributions to the American Conservative Union in recent years, at a time when he was considering running for president as a Republican.

Trump keeps saying that he’s gotten millions of votes in the Republican presidential primaries. By contrast, Ryan was officially elected as speaker of the House after he got the votes of 236 members by the full House of Representatives.

The Heritage Action Scorecard gives Ryan an overall grade of 63 percent, which is the average for House Republicans. For the year 2015, the American Conservative Uniongave Ryan a 78 percent, with a lifetime rating of 89 percent.

A rating system devised by political scientists Keith Poole and Howard Rosenthaldetermined that Ryan “would be the most conservative House speaker in generations.” The Milwaukee Journal-Sentinel said “he has spent much of his career pushing the GOP in a more conservative direction on the role of government and urging his party to be bolder in drawing contrasts with Democrats.”

By contrast, Trump has said, “Don’t forget—this is called the Republican Party. It’s not called the Conservative Party.” This comment came during an ABC “This Week” interview and appeared in a Washington Post article headlined, “How Donald Trump is running to the left of Hillary Clinton.”

On the same program, Rep. Tim Huelskamp (R-KS), a member of the conservative House Freedom Caucus, said Trump is “certainly not a conservative.” He explained, “You look at the issues, particularly issues of the heart like issues of life and marriage and family that are clear in our party platform. I mean, here is the guy who suggested he was going to appoint his pro-abortion sister to the U.S. Supreme Court and that seems to be the remaining issue—is that conservatives are supposed to vote for Donald Trump because of Supreme Court nominees.” He also cited “this bathroom [transgender] issue” that Trump has been “all over the map on…”

He added, “I have a nine-year-old and he can’t even listen to the guy on television. How will he bridge that gap? I don’t know. But when you live and die by the media and that was his entire primary campaign, it’s going to be a tough election moving into November 8th.”

The comments of Huelskamp, who supported conservative Senator Ted Cruz (R-TX) during the campaign, were preceded by similar remarks from Cruz himself. “This election will be studied for the role of the media, and in particular network executives, that they made in terms of promoting the candidate that they had chosen, they wanted to win,” Cruz said, after having dropped out of the race. “Trump has received now over $3 billion in free airtime.”

But Cruz predicted that the news organizations that favored Trump with massive coverage will now unleash a “ferocious fury” against him, in order to elect Hillary Clinton as president. Cruz said, “…I think it’s a very dangerous dynamic that we have right now.”

In a joint statement after their first meeting, on May 12, Ryan and Trump referred to Republican “shared principles” and a “conservative agenda,” but acknowledged “differences.” It’s difficult to see how those “differences” can be bridged to the satisfaction of conservatives like Huelskamp. And even if they can be bridged or papered over, what about the media “fury” that will now be used to destroy his campaign, partly by using his own inflammatory and vulgar words against him?

One thought on “Can Conservative Ryan Accept Liberal Trump?”