A Special Report from the AIM Center for Investigative Journalism

The lack of coverage in 2008 of the embarrassing facts in Barack Obama’s background, especially his deep personal relationship with a Communist by the name of Frank Marshall Davis, stands as a sensational example of how dishonest the national media can be when they are determined to elect somebody. If Obama’s opponent, Senator John McCain (R-AZ), had been linked to a Nazi or a Klansman, the press would have jumped on the story, with endless follow-ups. But the story of Obama’s Communist mentor was suppressed by a journalist for The Washington Post who had all the essential details and could have broken the story wide open.

We now know why the potential blockbuster story about Obama’s Communist mentor was deliberately ignored by Pulitzer Prize-winning Washington Post journalist David Maraniss. He had personal and political conflicts that prevented him from telling the truth about Obama to the American people. Simply put, his parents were Communists, just like Davis.

Maraniss, in other words, was a red-diaper baby.

The shocking truth can finally be told. His parents, Elliott and Mary Maraniss, along with Davis, were members of the same international conspiracy which had groomed Obama for the presidency, in order to hasten the decline and destruction of the United States.

Looking back, we can now see how the truth about Obama’s communist ties could have led to embarrassing disclosures about the family of Maraniss. If Obama had a Communist mentor, and that was newsworthy, what about the fact that Maraniss had two Communist parents? Clearly, he didn’t want that to get out. We understand the motivation behind the cover-up. But having a father and mother involved in the Communist Party should not have stopped Maraniss from telling the truth about a presidential candidate’s Communist connections. He was supposed to be a journalist with ultimate loyalty to the truth.

The controversial Communist connections help explain why, when Maraniss wrote a piece, “Though Obama Had to Leave to Find Himself, It Is Hawaii That Made His Rise Possible,” in the August 22, 2008, edition of the Post, the name of Frank Marshall Davis was completely left out.

Ironically, the story focused on Obama’s life and upbringing in Hawaii, where he met Davis, and where Davis exercised considerable influence over Obama’s growing-up years. By some accounts, Davis functioned as Obama’s mentor for seven or eight years. But Maraniss ignored Davis altogether. It seemed mystifying at the time.

END_OF_DOCUMENT_TOKEN_TO_BE_REPLACED 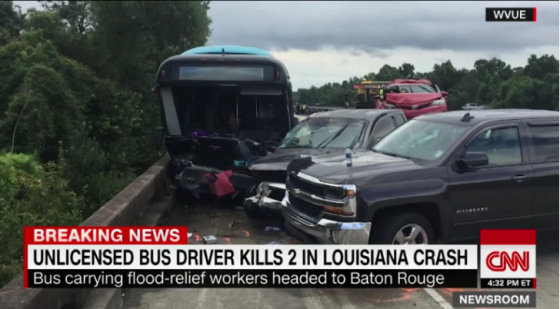 Kristen Welker informed viewers of the NBC Nightly News that an “undocumented worker” was at fault in a terrible bus crash in Louisiana on August 28 that killed two people and injured 41 others. It is typical of the media to use that phrase when referring to illegal aliens. It is how the media try to condition people to accept their presence in the United States. After all, if these people are “workers,” they can’t be such terrible people. On the other hand, the word “alien” implies something foreign to the United States.

The Breitbart website, under fire from the liberal media and Hillary Clinton, was accurate, noting that “illegal alien” Denis Yasmir Amaya Rodriguez drove the private rental bus that crashed into a fire truck, two other vehicles and three firefighters.

By using the phrase “undocumented workers” over and over again, the media think that people will gradually change their views about the invasion of the United States through our southern border and become more accepting of the foreigners on American soil. This is how liberal brainwashing is designed to work over time.

The problem for the media is that, in this case, the terrible crash involved the deaths of two people and injuries to 41 others. Even using the sanitized term “undocumented worker” can’t paper over the serious nature of what happened.

A statement from the Louisiana State Police explained that emergency vehicles were attending to one crash when they were hit by the bus driven by the illegal alien. Victims included first responders. It said, “For reasons under investigation, the bus struck the left side of the fire truck that was angled in the right lane. The bus then struck the rear of a 2012 Toyota Camry, and the Camry was pushed into the rear of a 2016 Chevrolet Silverado and flatbed trailer. After striking the rear of the Camry, the bus veered into the right lane between the Trooper unit and the Titan. It struck the three firefighters who were standing near the guardrail. The firefighters were thrown over the edge of the elevated interstate into the water below, approximately 30-40 feet. The Fire Chief, Spencer Chauvin, was transported to River Parishes Hospital where he was pronounced deceased.”

There is much more to the story, in terms of those who were injured, but what’s also critical is that the official police statement goes on to say that “The driver of the bus has been identified as 37 year old Denis Yasmir Amaya Rodriguez. Rodriguez is an illegal alien from Honduras and does not have a driver’s license.”

So the police, at least, still have enough integrity and honesty to use accurate terminology.

Rodriguez was charged with two counts of negligent homicide, reckless operation, negligent injuring and no driver’s license, and “additional criminal charges are forthcoming.”

Don’t look for any in-depth news reports on this illegal alien killing and injuring people in Louisiana. That might help the Trump campaign.

Many news media outlets, including CNN, used the phrase “undocumented immigrant” to describe the illegal alien.

The New Orleans Advocate reported that he had been pulled over by State Police on August 5 and cited for driving without a license. Yet he was on the road again, speeding down a highway.

A New York Daily News headline glossed over all of this saying, “Bus full of Louisiana flood workers crashes, killing 2, including fire chief, over 30 injured.” The number of injuries has since risen to 41.

The bus was full of flood workers, many of them also illegal aliens.