“I must say I am really discouraged by the people he’s bringing into his administration.  He starts with someone like Steve Bannon, who celebrates white supremacy.” -Senator Elizabeth Warren, Islamic Society of Boston Cultural Center, December 11, 2016

Imagine if a prominent mayor and senator spoke at an organization founded by white supremacists convicted of plotting to murder [name religious or ethnic group here]. Imagine that the organization also happened to have prior members who murdered innocent people in the name of white supremacy and yet additional members who were serving prison sentences for their roles in various plots to hurt [name religious or ethnic group here].

Would there be questions?

But there is precious little discussion in the mainstream media about the attendance of Sen. Elizabeth Warren and Boston Mayor Marty Walsh at the terror-linked Islamic Society of Boston Cultural Center on Sunday night at an event sponsored by the Greater Boston Interfaith Organization. 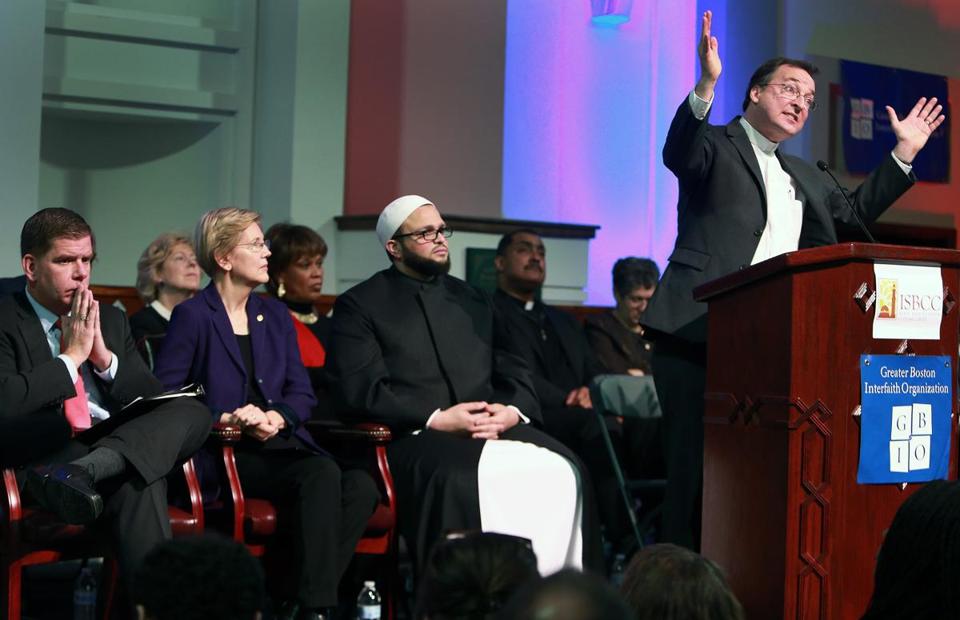 Massachusetts U.S. Sen. Elizabeth Warren and Boston Mayor Marty Walsh “joined a crowd of more than 2,000 people at Boston’s largest mosque on Sunday night for a rousing conversation about diversity and solidarity as President-elect Donald Trump prepares to take over the White House.” Photo via JIM DAVIS/GLOBE STAFF

Speakers such as Senator Elizabeth Warren parroted the blatant lies about 1.) an uptick of “hate crimes” since Donald Trump’s election and 2.) the #FakeNews about Trump proposing a so-called “National Muslim Registry.”

Both of these allegations are verifiably false.

And there is the minor detail that the Islamic Society of Boston has ties to numerous Islamic terrorists.

Islamic Society of Boston has ties to terrorism. Should be investigated, not legitimated. https://t.co/lmSKtZLeOn

As reported at the NY Post by Paul Sperry in September, 2014, the most famous members of the Islamic Society were Boston Bombers Tamerlan Tsarnaev and his brother Dzhokhar.

Other worshipers at the Islamic Society of Boston have included:

Sperry points out that “investigators found a mosque prayer card for [ Tarek] Mehanna tucked in a Russian dictionary in Tsarnaev’s Cambridge apartment.” Al-Awlaki “was also said to inspire would-be Times Square bomber Faisal Shahzad” and preached at the mosques attended by 9/11 hijackers Nawaf al-Hazmi, Khalid al-Mihdhar and Hani Hanjour. As reported at Fox News, the three hijackers “were all onboard Flight 77 that slammed into the Pentagon.”

During her speech, Elizabeth Warren warned against “bigotry:”

“We’re here to stand against bigotry in all of it’s forms. Yes. These are challenging times and many people are afraid. Since the election, hate crimes have been on the rise. Attacks on religious and racial groups have sky-rocketed. And now is a time when we must be willing to say, loud and clear, ‘there is no room for bigotry anywhere in the United States of America.’ None. Let us be clear, let us say it as many times as we need to. An attack on one of us is an attack on all of us. And we will fight back against discrimination whenever and wherever it occurs. We will fight back calmly, we will fight back deliberately, and we will fight back with absolute resolution.”

These words would be inspirational if they were not based on an entirely false premise, and that is that the election of Donald Trump has empowered racist white Americans to commit hate crimes. It is a lie reminiscent of that which fuels the “Black Lives Matter” movement, similarly based on the entirely false premise that white police officers are indiscriminately murdering black Americans.

It should be noted that several prominent citizens published an open letter to Senator Elizabeth Warren and Mayor Martin Walsh expressing concerns about their appearance at a terror-linked mosque. But it went ignored.