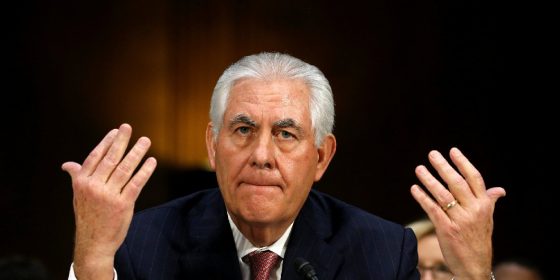 The Trump administration has undergone a major shift in policy towards Syria and Assad in the last 24 hours. After a horrific chemical attack on Syrians by Assad, Rex Tillerson is now saying that the US is organizing a coalition to remove Assad from power there. This goes directly against the Russians and Iranians who have provided cover for Assad from the beginning. I have sources informing me that the US military watched a Syrian fixed wing aircraft drop the bombs that hit a hospital with a nerve agent and this was after the first chemical weapon bomb was dropped. The aircraft used was likely a Russian aircraft that was on loan to Assad. The evidence that the White House and State Department has seen on this attack is damning and monstrous.

“It is very important that the Russian government consider carefully their continued support for the Assad regime,” Tillerson said. Yes, it is… and if we step into this, Americans need to realize this is not just a fight against Assad and ISIS. The minute we commit military might in this fight, we take on the Russians, Iranians and Chinese. In other words, this could be a world war and there will be no turning back. Our military leaders have been predicting this for some time. And don’t forget, we have the North Korean problem to deal with and soon. This is the new Axis of Evil I have written on for years now. The time to dance is upon us.

“With the acts that he has taken, it would seem that there would be no rule for him to govern the Syrian people,” Tillerson told reporters. “The process by which Assad would leave is something that I think requires and international community effort, both to first defeat ISIS within Syria, to stabilize the Syrian country to avoid further civil war, and then to work collectively with our partners around the world through a political process that would lead to Assad leaving.”

Tillerson added that “those steps are underway” already.

It’s a marked shift from last week, when Tillerson told reporters in Turkey that Assad’s future would be up to the Syrian people — an apparent departure from former President Barack Obama’s stated position that he had to leave power. And it adds a new layer of complexity to Tillerson’s upcoming trip to Moscow, as Russia has provided Assad with major military and diplomatic support.

Russian President Vladimir Putin’s government is now indicating that Assad might not enjoy “unconditional support” from them, as they disclaimed responsibility for the Syrian gas attack. “It is not correct to say that Moscow can convince Mr. Assad to do whatever is wanted in Moscow,” Putin spokesman Dmitry Peskov said. “This is totally wrong.” So, there is a slim chance that the Russians may back down. I doubt the Iranians will, but we will see. A show of force from the US under the Trump administration may be enough to contain this. I have my doubts.

“There is no doubt in our minds and the information we have supports that the Syria, the Syrian regime under the leadership of President Bashar al-Assad, are responsible for this attack,” Tillerson said. As I pointed out earlier, they have intel we have not seen and I understand there is no doubt on this at all now. The US blames Assad for a chemical weapons attack in Khan Shaykhun, a rebel-controlled town in Syria’s northwestern Idlib province. The attack left 72 people dead and possibly hundreds more wounded. Originally, it was claimed that the rebels had hidden chemical weapons in a warehouse and that when blown up, they spread. But that is being disproven as I write this. The rebels also have no way of dispersing a chemical weapon even if they had one.

Tillerson was asked whether the US is considering military strikes against the Syrian government: “We are considering an appropriate response for this chemical weapons attack, which violates all previous U.N. resolutions, violates international norms and long-held agreements between parties including the Syrian regime, the Russian government and all other members of the Security Council,” he said. According to a CNN report today, members of Congress told the network that President Donald Trump has told them the US has considered a military response to the gas attack as one of its options. CBS reported that military options could include cruise missile strikes from Navy ships targeting command and control operations, suspected chemical weapons facilities and military forces.

“…we think its time that the Russians really need to think carefully about their continued support of the Assad regime,” Tillerson said Wednesday. “Those who defend and support him, including Russia and Iran, should have no illusions about Assad or his intentions. Anyone who uses chemical weapons to attack his own people shows a fundamental disregard for human decency and must be held accountable,” Tillerson added. We are quickly running out of options and the war drums are ever louder now. Assad should know that America is preparing to come for him and soon.