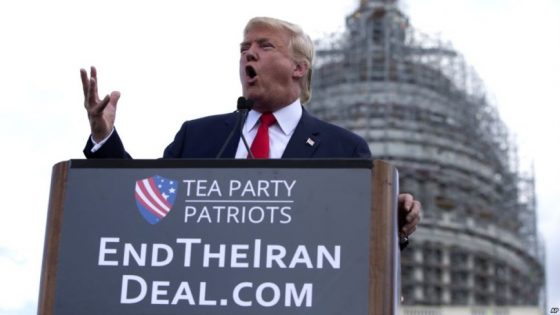 Recent comments by Secretary of State Rex Tillerson warning that Iran could follow North Korea’s path of nuclear belligerence, and the Trump administration’s certification, in turn, that Iran is complying with the Joint Comprehensive Plan of Action (JCPOA), seem to send mixed messages. However, any guarantee of Iran’s compliance must grapple with the fact that the International Atomic Energy Agency (IAEA) inspectors can only inspect declared, and not military or undeclared, nuclear development sites.

“An unchecked Iran has the potential to follow the same path as North Korea and take the world along with it,” said Tillerson at the State Department. “The United States is keen to avoid a second piece of evidence that strategic patience is a failed approach.”

In other words—as we have often argued—the path of “patience,” or waiting, toward Iran means that this totalitarian regime is virtually guaranteed to eventually develop nuclear weapons. The unsigned Iran deal actually legitimizes Iran’s nuclear aspirations by condoning its enrichment of uranium.

The Iranian regime has also been emboldened by this unsigned deal because it supposedly binds the hands of both Congress and President Donald Trump. On April 20, Iran’s foreign minister, Mohammad Javad-Zarif, tweeted that “Worn-out US accusations can’t mask its admission of Iran’s compliance w/ JCPOA, obligating US to change course & fulfill its own commitments.”

On the campaign trail Donald Trump described the Iran Deal as “the worst deal ever negotiated” and threatened to rip it up. Trump’s actions certifying Iran’s compliance appear to be a marked departure from his earlier campaign promises. But in reality it amounts to a 90-day extension of sanctions relief, part of a review process that was one of few concessions to Congress having a role. Trump said at his press conference with the Italian prime minister on April 20 that Iran has “not lived up to the spirit of the agreement. They have to do that. They have to do that.” Trump said that “they are doing a tremendous disservice to an agreement that was signed. It was a terrible agreement. It shouldn’t have been signed.”

First of all, President Trump, no, it wasn’t signed. It was never signed. And here is the proof. It is a letter from then-Secretary of State John Kerry’s State Department to then-Rep. Mike Pompeo (R-KS), who at the time was on the House Select Committee on Intelligence, and is now the CIA director.

Pompeo responded to the State Department letter by posting a press release on his congressional website stating that the “unsigned” deal was “nothing more than a press release and just about as enforceable.” He added that “For the State Department to try to defend the unsigned and non­binding Iran nuclear agreement by calling it a ‘political commitment’ is about as absurd as the terms of the deal itself.” So why is the Trump administration participating in this sham agreement?

As the Times of Israel reports, “he [Trump] is looking for another way to ratchet up pressure on Tehran.” It looks like Trump wants to take a closer look before deciding how to proceed, and this certification that Iran is in compliance was more of a strategic pause than a seal of approval that Iran is living up to its end of the deal. According to the Times of Israel, “Tillerson said the administration has undertaken a full review of the agreement to evaluate whether continued sanctions relief is in the national interest. Tillerson noted that Iran remains a leading state sponsor of terrorism and that President Donald Trump had ordered the review with that in mind.”

What Trump should do is rip up the deal and end sanctions relief toward Iran. New, harsher sanctions should be imposed on this totalitarian dictatorship. At the end of the day, the only real solution to the Iranian problem is regime change.

Yet The Washington Post claims, “If the administration were to decide to walk away or otherwise renege on its commitments, it would open the door for Iran to cast aside its own promises and resume the unfettered development of its nuclear program.” What commitments are these? Refusing to impose more sanctions on Iran despite its sponsorship of terror and human rights abuses?

In fact, the Post reports that the Republican-led Congress is working on extending a number of sanctions, but they have delayed the legislation in order to limit the effect on Iran’s presidential election, “which is scheduled for next month.” Iran shouldn’t just be punished for pursuing nuclear weapons, it should also be punished for its state sponsorship of terror.

While former President Barack Obama also acknowledged that Iran is indeed a state sponsor of terrorism, it is one of only three nations that still remain on the State Department list. Obama said “It helps prop up the Assad regime in Syria. It supports Hezbollah in Lebanon and Hamas in the Gaza Strip. It aids the Houthi rebels in Yemen. So countries in the region are right to be deeply concerned about Iran’s activities, especially its support for violent proxies inside the borders of other nations.” When Obama said it, the media used it to show that he wasn’t trying to appease Iran. That he was tough on Iran. But coming from the Trump administration such a suggestion smacks of reckless belligerence, at least to the establishment media.

Last month, the U.S. and Iran engaged in a tit for tat with sanctions: “Iran hit Raytheon Co., United Technologies Corp. and 13 other U.S. companies with sanctions on Sunday for ‘propping up the Zionist regime’ of Israel, according to Iranian state media, retaliating against U.S.-imposed penalties on entities accused of aiding Iran’s missile program.”

Lost in the reporting is the media’s refusal to admit that Obama’s highly touted nuclear deal with Iran is nothing more than an unsigned collection of political commitments which can be broken by any party at any time. In fact, the media continue their fake news reporting by calling this deal “signed” in order to preserve the integrity of what is commonly viewed by his supporters as Obama’s signature foreign policy achievement. But it’s not clear why Trump calls it “signed.” Maybe he doesn’t know.

Warnings from newspapers such as the Post that a lack of good faith on the part of Trump will lead to a nuclearized Iran ignore the obvious conclusion that Iran will eventually become a nuclear power, and that in its current form the so-called agreement is virtually unenforceable.

Last week, CIA Director Pompeo told a Center for Strategic and International Studies (CSIS) audience that “We should all be mindful, given what took place in Syria, and go back and read that JCPOA when it talks about declared facilities and undeclared facilities and how much access the IAEA will have to each of those two very distinct groups.”

“So that might suggest to you what level of certainty we could ever hope to present to the commander in chief,” Pompeo continued. In other words, there is no certainty: if the intelligence community cannot guarantee knowledge of what is happening at undeclared facilities, then Trump, and America as a whole, will be left in the dark about Iran’s nuclear weapons progress. Iran could build the bomb without us finding out until it’s too late. In fact, intelligence experts that I have spoken with believe that Iran may already possess nuclear weapons. The unsigned deal is a document based on trust between the parties, yet Iran is clearly not worthy of such trust.

What we do know is that German intelligence found that Iran sought illegal nuclear technology in 2015. Similarly, Iran continues its ballistic missile tests. As Fred Fleitz—previously of the CIA, the DIA, the State Department and the House Intelligence Committee—has said, “The deal dumbed down the IAEA’s quarterly Iran reports…making it difficult for the world to know the true extent of Iran’s compliance.” The media urgently need to report that the inspections, and unsigned deal, are fatally flawed. But don’t look to a complicit, incestuous media to do anything that might undermine Obama’s legacy.