By: Trevor Loudon – The Epoch Times 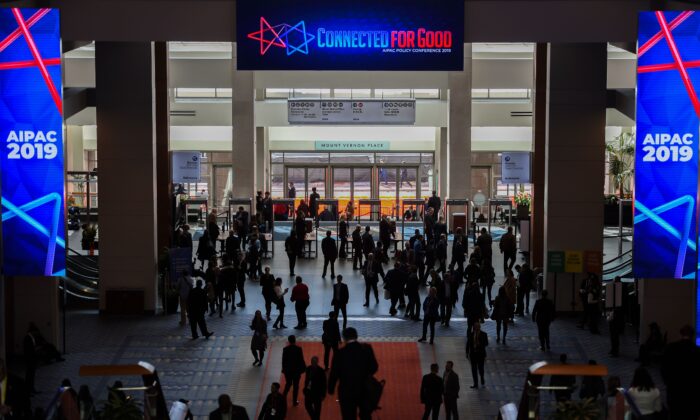 The U.S. hard-left is well on the way to eliminating any remaining support for the State of Israel among the Democratic Party leadership.

A long-term campaign of persuasion, pressure, and intimidation has caused even comparatively moderate Democrats to distance themselves from the Jewish state. Israel, a major recipient of U.S. military aid, has long relied on bipartisan support in the U.S. Congress. Given the rapidly increasing socialist influence at all levels of the Democratic Party, those days could be coming to an end.

The latest Democratic Party leaders to buckle under leftist pressure are now-former presidential candidates Sen. Amy Klobuchar of Minnesota and former South Bend, Indiana, Mayor Pete Buttigieg. Both announced on Feb. 26 that they would not attend the American Israel Public Affairs Committee (AIPAC) conference due to be held March 1 and 2 in Washington, D.C.

Candidates Bernie Sanders and Elizabeth Warren had already bowed out earlier in the week.

For decades, both leading Democrats and Republicans have attended the annual policy conference led by AIPAC. This snubbing of the premier pro-Israel event on the Washington, D.C., calendar by several Democratic presidential contenders is no doubt being noted with deep concern in Jerusalem and Tel Aviv.

According to Common Dreams, “Jewish-led activist group IfNotNow credited its #SkipAIPAC campaign—which it’s leading with MoveOn, Indivisible, and the Working Families Party … — with convincing Buttigieg and Klobuchar to skip the conference.”

Said IfNotNow co-founder Dani Moscovitch in a statement: “This is a watershed moment and a major victory against the bigotry that AIPAC has legitimized for decades. …

“Even moderates in the Democratic Party are now refusing to attend a conference by a right-wing lobby that allies with bigots just to shield the Israeli government from any consequences for denying the Palestinian people freedom and dignity.”

“Because of grassroots pressure, the tide is turning,” IfNotNow tweeted.

Far-left journalist Glenn Greenwald said in a tweet that the shunning of AIPAC solidifies its status as “a fringe, right-wing, radioactive rogue organization.”

“Thank you Senators Warren, Sanders, and Klobuchar, and Mayor Pete for standing by your values and choosing to #SkipAIPAC. No candidates should be pandering to AIPAC, which spent millions in an attempt to defeat the Iran Nuclear Deal and continues to give a platform to Islamophobes and bigots.”

IfNotNow claims to consist of “young Jews angered by the overwhelmingly hawkish response of American Jewish institutions” to OPE.

In reality, it is a hard-left anti-Israel activist group bent on ending U.S. military and economic support for one of this country’s most important allies.

“It is time to end the blank check and for our tax dollars to stop funding the Israeli occupation,” said IfNotNow leader Moscovitch in the aforementioned statement.

IfNotNow grew out of the Occupy Wall Street movement of 2011–2012. Many of its leaders were also active in Momentum, an activist training group with links to the Freedom Road Socialist Organization (now known as Liberation Road), a “post-Maoist” organization with ties to China, Cuba, and several foreign and domestic revolutionary movements.

IfNotNow has conducted multiple protests, sit-ins, and propaganda stunts against Israeli interests in the last six years. Like Liberation Road, IfNotNow operates an inside/outside strategy. The organization constantly tries to pressure the Democratic Party in an anti-Israel direction, while simultaneously trying to influence senior party figures from the inside.

Zimmerman sparked American Jewish outrage when a year-old Facebook post emerged in which she swore at Israeli Prime Minister Netanyahu and described him as “arrogant, deceptive, cynical” and “manipulative,” according to the Washington Free Beacon.

Yonah Lieberman, who co-founded IfNotNow with Zimmerman and others, fired back, telling the Huffington Post:

“The smear campaign being waged against Simone Zimmerman is a reflection of how out-of-touch the American Jewish establishment is with the Jewish community. …

“This is not the first sign of this disconnect — it just the most blatant example of the American Jewish establishment trying to intimidate and silence young people acting on the very Jewish values we were taught by our community. … The Jewish establishment won’t stand for anyone criticizing Israel — no matter the truth or reason. When young Jews call for freedom and dignity for the Palestinians, the establishment can only respond with intimidation and fear.”

In 2019, Berger also came under fire while working for the Elizabeth Warren presidential campaign as her “director for progressive partnerships.”

A 2013 tweet resurfaced in which Berger had stated: “I would totally be friends with Hamas.”

Candidate Warren calmed the ensuing concern by assuring Jewish groups that Berger “wouldn’t be working on Middle East policy,” according to Mondoweiss.

Berger had been involved in Occupy Wall Street and Justice Democrats, the organization that “manufactured ” DSA comrade and Rep. Alexandria Ocasio-Cortez (D-N.Y.). Berger also has ties to the DSA and was consulted in the formation of Liberation Road satellite organization LeftRoots.

Both the DSA and Liberation Road are militantly opposed to Israeli government policy regarding the so-called “occupied territories” and support moves to economically and culturally isolate Israel.

Now, this tiny group of radicals is able to shame Democratic presidential contenders into turning their backs on the Democratic Party’s 70-year history of support for Israel.

Shame on Sanders, Warren, Buttigieg, and Klobuchar for buckling to pressure from the Anti-Israel far-left—or worse still covertly sympathizing with them. 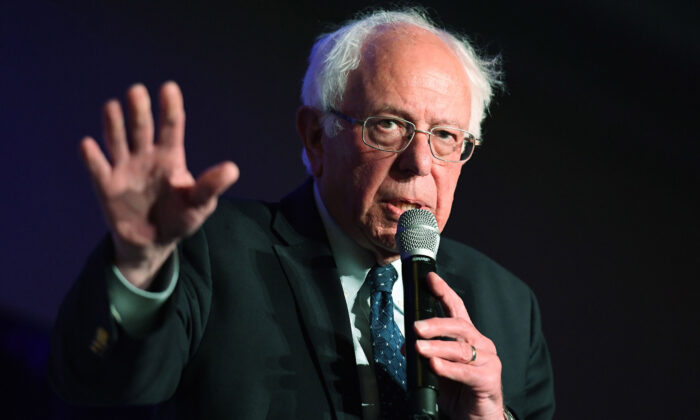 Sanders, a lifelong Marxist, never met a revolution he didn’t like. Seeing the good side of Marxism comes naturally to Sanders. Marxists are students of history; they take the long view. Yes, in the “short term,” socialism can produce misery and death on a huge scale because, in the long run, they’re sowing the seeds of a “great new society,” a utopia of endless bounty, and opportunity for all.

What does it matter if hundreds, or thousands, or millions die in the process? The individual is nothing; it’s the good of the “collective” that counts.

In an interview on CBS News’ “60 Minutes,” Sanders described what he saw as two sides to the regime of Cuba’s Fidel Castro:

“We’re very opposed to the authoritarian nature of Cuba, but you know, it’s unfair to simply say everything is bad. … When Fidel Castro came into office, you know what he did? He had a massive literacy program. Is that a bad thing? Even though Fidel Castro did it?”

A legitimate literacy program would normally be a good thing. Literacy is an essential tool for all who aspire to both liberty and prosperity—but that was far from the Cuban Communist Party’s purpose. Castro didn’t seek liberty and prosperity for his people. He sought slavery and control.

According to a now-declassified CIA intelligence report, “NIE 85-62: The Situation and Prospects in Cuba” from March 21, 1962:

“Before the revolution, Cuba enjoyed a relatively high literacy rate—for all his faults, Batista had been a notable founder of rural schools. With great fanfare, however, the [Castro] regime undertook to eradicate illiteracy in Cuba and named 1961 the ‘Year of Alphabetization.’ The universities and secondary schools were closed; the students and others were turned into ‘literacy brigades’ and sent forth to alphabetize the illiterate.

“The operation served three political purposes: (a) To organize, indoctrinate—and inspire—the literacy brigadiers; (b) to gratify the alphabetized and make them accessible to regime propaganda; and (c) to make a propaganda impact throughout illiteracy-ridden Latin America. Some illiterates proved recalcitrant, but in general the operation was successful in achieving these purposes.”

So Castro’s communist program was far from altruistic. Its purpose was not to uplift the people, but to make them more controllable and to encourage the spread of revolution across Latin America.

Sanders and his wife, Jane, visited Cuba in 1989 and tried to meet with Castro. That couldn’t be arranged, so, instead, they met with the mayor of Havana and other officials. The trip was organized by the Center for Cuban Studies, a pro-Castro group based in New York.

When he returned to Vermont, Sanders reported that Cuba had “solved some very important problems” such as hunger and homelessness, according to The Daily Beast.

Even Cuban health care serves a revolutionary purpose. Cuban doctors are serving in Third World countries all over the world as “ambassadors” for the communist regime. Venezuela has thousands of them—all loyal servants of the Maduro government and the Cuban Communist Party. After the anti-communist president Jair Bolsonaro came to power in Brazil in 2018, Cuba withdrew 8,300 doctors from the country.

Cuba’s Latin American Medical School (ELAM) provides scholarships to more than 10,000 low-income students from Africa, Asia, and the Americas who make a commitment to work in “underserved communities at home.”

Several Americans have also earned their medical degrees at ELAM, courtesy of the Cuban worker. Many of them are communists or the sons and daughters of U.S. Communist Party members. What kind of return does the Cuban government demand for its investment?

Before he took power, Castro repeatedly told foreign journalists some variation of this meme:

“There is not communism or Marxism in our ideas. Our political philosophy is representative democracy and social justice.”

After President Donald Trump recently called Sanders a “communist,” Sanders told Fox News: “Obviously, I am not a communist. … The difference between my socialism and Trump’s socialism is I believe the government should help working families, not billionaires.”

Sanders is always careful to add the qualifier “democratic” when he refers to himself as a socialist. But the definition of “democracy” means something very different to a Marxist than it does to most American voters.

Even Sanders, though, wasn’t always willing to use the “s” word.

In 1976, Sanders told student newspaper The Vermont Cynic, “I myself don’t use the word socialism … because people have been brainwashed into thinking socialism automatically means slave-labor camps, dictatorship, and lack of freedom of speech.”

Well, actually it does, comrade Sanders—given enough time. But we don’t want to frighten the voters, do we?

The difference between Castro’s “representative democracy and social justice” and full-blown communism was about three years. Only when he had fully consolidated his power and had executed, jailed, or expelled all serious opposition forces did Castro openly proclaim his commitment to Marxism-Leninism.

Sanders has boasted he has a list of “dozens of executive orders” to be enacted as soon as he’s inaugurated.

How long would it take President Sanders to turn his “democratic socialism” into communism? It shouldn’t take too long. Castro has already laid out the blueprint.