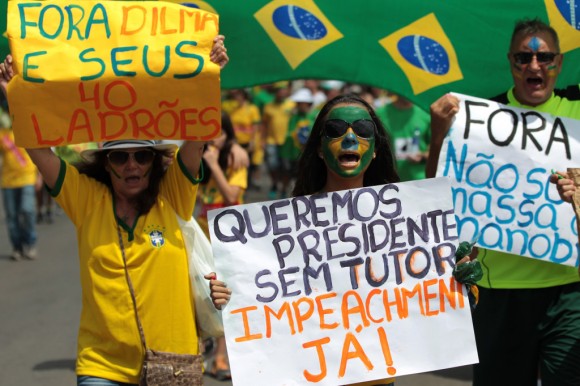 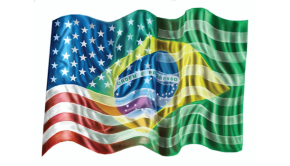 With the Middle East in turmoil and Russia’s Vladimir Putin threatening nuclear war, most of our media have missed a big story south of the border. President Barack Obama’s fellow Marxist, Dilma Rousseff, is coming under tremendous pressure to resign her presidency in Brazil. As many as three million Brazilians took to the streets on Sunday to demand the impeachment of Rousseff, a former Marxist terrorist, and the end of the rule of the Brazilian Workers’ Party.

Such a development would be a major blow to the anti-American left in Latin America, which has been operating since 1990 under the rubric of the São Paulo Forum, a pro-communist movement started by Rousseff’s predecessor, Luiz Inácio Lula de Silva, and Fidel Castro.

In a growing scandal, the treasurer of the ruling Workers’ Party has been charged with corruption and money laundering linked to the state-run oil company, Petrobras, a firm which has benefited from U.S. taxpayer loans provided through the Export-Import Bank under Obama.

While Obama has attempted to stifle oil development and production in the United States, his administration officially launched an “energy partnership” with Brazil in August of 2011. “We want to work with you. We want to help with technology and support to develop these oil reserves safely, and when you’re ready to start selling, we want to be one of your best customers,” Obama told a group of Brazilian business leaders.

Some stories appearing in the Western press did note that as many as one million Brazilians turned out on Sunday to protest massive corruption linked to the Rousseff administration. One photo from the march showed a Brazilian waving a sign that said, “We won’t be another Venezuela,” a reference to another Marxist basket case of economic failure and corruption.

But sources contacted by Accuracy in Media say the turnout was far larger, with as many as three million Brazilians in the streets.

Alessandro Cota, a Brazilian who is currently a philosophy and political science researcher at the Inter-American Institute for Philosophy, Government, and Social Thought, told AIM, “This March 15 is certainly a new beginning for Brazil and probably the end of the dreams of all those who wanted to turn the largest country of Latin America into a socialist republic. After 12 years under the rule of the Brazilian Workers’ Party—8 years under President Lula (2003-2011), and 4 years under President Rousseff (who was re-elected last October for another four-year turn)—the Brazilian people, tired of waiting for opposition politicians to take action against the government, took the lead and decided to make history by themselves.”

Brazilian philosopher Olavo de Carvalho, President of the Inter-American Institute for Philosophy, Government, and Social Thought, said, “Never and nowhere has a government been so completely rejected by its own population. But it is more than that. It is not only the rejection of a government, or a President. It is the rejection of the whole system of power that has been created by the Workers’ Party, which includes intellectuals and opinion-makers in the big media. People are no longer afraid of going against the Workers’ Party. Brazilians realized that all the power that President Lula, President Rousseff, and their minions had was based on a bluff, and now they are calling it.”

He added, “It was the largest nationwide anti-government demonstration in the history of Brazil, and it happened just two days after the Workers Party’s allies organized their own ‘popular’ demonstration in support of President Rousseff.” He said the March 15 wave of protests was genuinely popular, a massive embodiment of the seven percent approval rating that Rousseff received only a few days ago. He said the March 15 demonstrations took place in 26 of the 27 Brazilian states and at least 160 cities, not to mention the anti-government protests that happened abroad.

By contrast, Cota said a pro-government demonstration was attended by a mix of card-carrying union members and people who got paid the equivalent of $10.

It appears that the Brazilian mainstream media have decided to deliberately play down the anti-regime sentiment. Cota said, “According to Datafolha, a local polling company linked to the leftist newspaper Folha de São Paulo, there were only 210 thousand people gathered on Avenida Paulista, the main thoroughfare of the city of São Paulo, a number that not only contradicted the official estimate of the State Police of São Paulo, but also the eyes of those who use them to see.”

The protests in Brazil are giving hope to those who see an opportunity to defeat Marxism in the Western hemisphere.

The pro-communist association called the São Paulo Forum was created in 1990, after the collapse of the Soviet Union led many to believe communism itself was on the wane. However, that was when Fidel Castro reached out to Luiz Inácio Lula de Silva of the Workers’ Party of Brazil, who would later become President of Brazil. An event was hosted in São Paulo, Brazil, bringing together what came to be known as the São Paulo Forum. The international movement included many different leftist groups, such as the communist narco-terrorists known as the Revolutionary Armed Forces of Colombia (FARC), and communist and leftist parties in the region.

Incredibly, a report appeared which seemed to demonstrate a possible link between the Obama presidency and this leftist group.

On March 1, 2008, before U.S. presidential elections, Operation Phoenix was launched by Colombian special security forces just inside the Ecuadorian border. Raúl Reyes, second in command of the FARC, was killed. Documents found in Reyes’ computer after his death disclosed that “gringos” representing Obama wanted to meet with the FARC and that they were opposed to U.S. military aid for the Colombian government. Obama had been publicly critical of the Colombia government’s human rights record.

The Bush administration, using the services of the NSA, helped the Colombian government of President Alvaro Uribe in its war with the Cuban-backed FARC by locating and killing terrorist leaders and decimating the organization. But Uribe’s successor, President Juan Manuel Santos, the former defense minister, suddenly opened up negotiations with the FARC in Havana and has recently suspended the bombing of FARC camps and bases. As a result, the Santos-led negotiations could enable the FARC to escape criminal charges and emerge in the political process in Colombia as a respectable opposition movement.

Supporters of Uribe accuse Santos of allowing “Castro-Chavism” in the country, a reference to the long-time Cuban dictator and former Marxist ruler of Venezuela. Although the members of the São Paulo Forum do not believe in democracy, the FARC seems to have learned the lesson that they have to disguise themselves as democratic forces in order to further their goals, as their armed struggle has not been successful.

Like Obama in the U.S., these Marxists work through the system and slowly dismantle democratic institutions and checks on their power.