Dems Look to Other Health Options

Obama to Meet With Unions Over ‘Cadillac Tax’

Risk of Power Collapse a Political Threat to Chavez

Senate Panel Near Agreement on Role of Fed

Bank Lending Poised to Pick Up

From: The Radio Patriot – Thanks to SG for sending this…

Here are some recent photos of the LCS 2 (to be USS) Independence . She’s at 43 knots here running at half power. NOTE the absence of a bow wave. 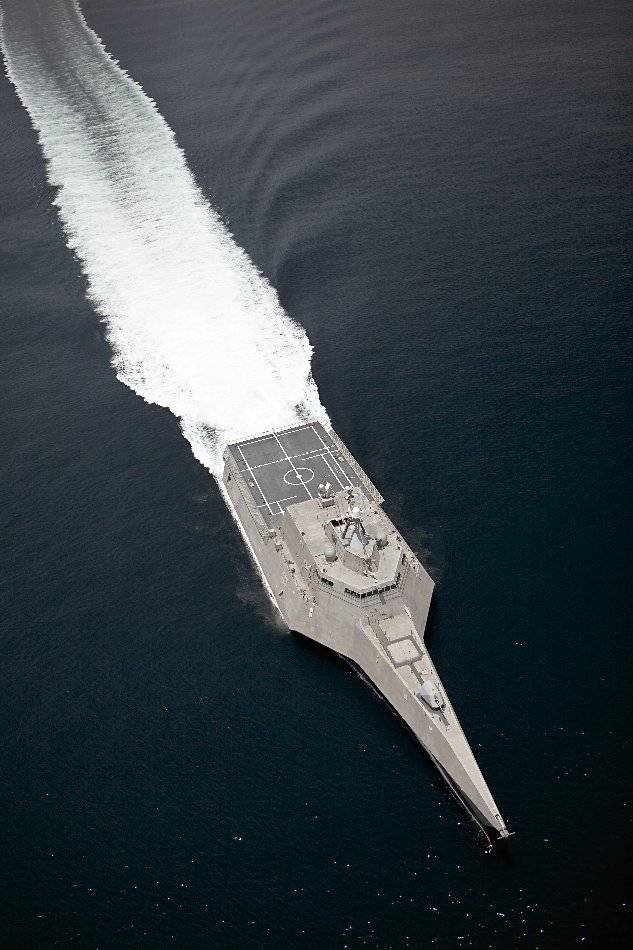 Turns tightly, also; allegedly this also was done at 43 knots… and from the look of the small bow wave, she’s still in the turn. 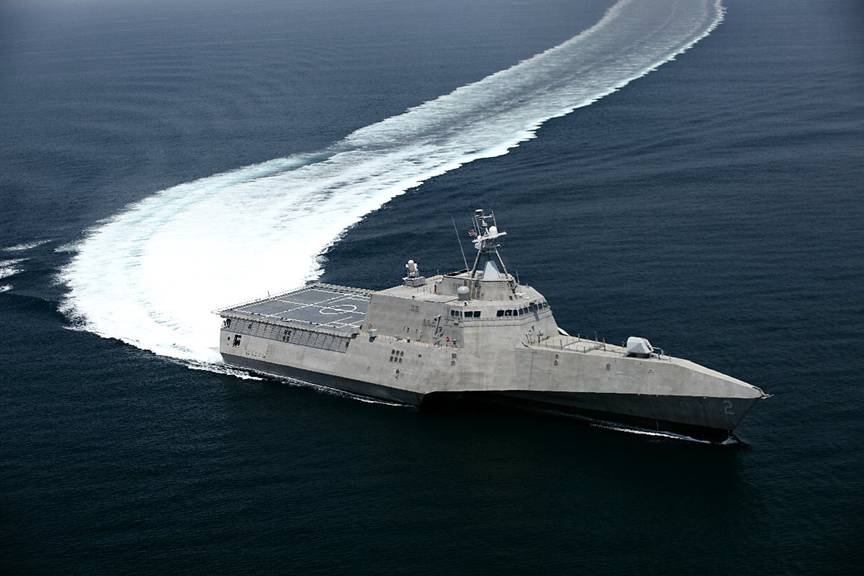 And then we have the massive helo deck big enough for a CH-53. Last time I talked with the SURFPAC guys years ago. THIS was the LCS they liked because of the huge storage capacity under that flight deck and the size of the flight deck. 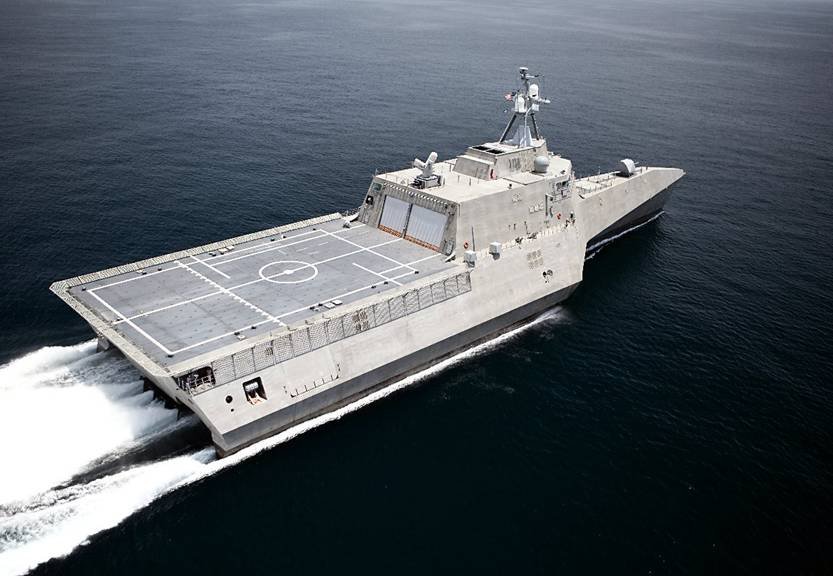 Note that there is very little spreading wake. In fact, it does not look like a wake at all, just foamy water from the water jets. Somehow, at 40 knots, you’d think there’d be more wake. 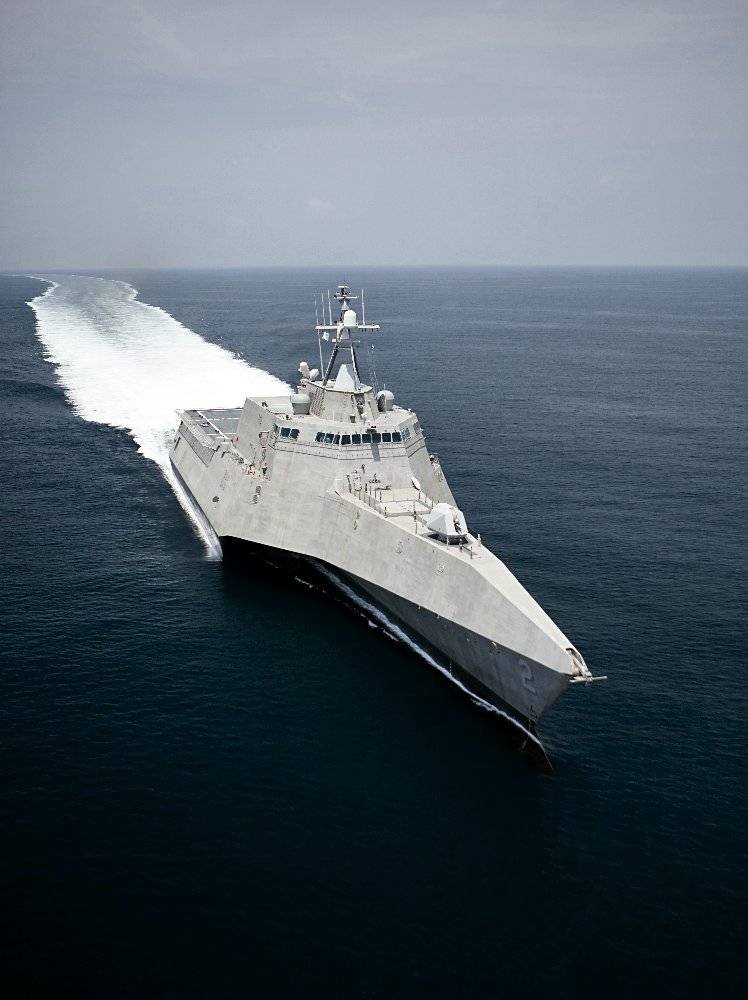 But she has one drawback, she’s strange looking but aerodynamically designed. Is this the beginning of a new design in ships? 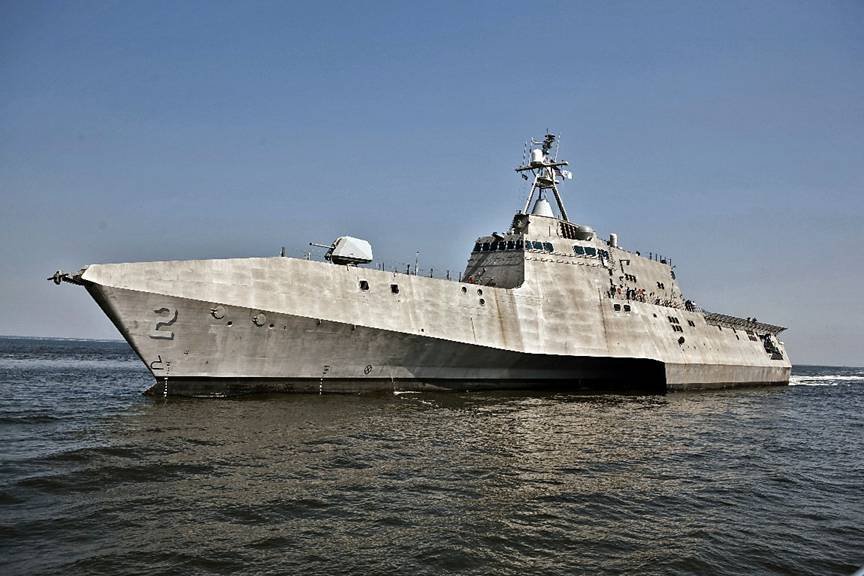 Here’s a Look at The U.S. Navy’s New Pirate Catchers! 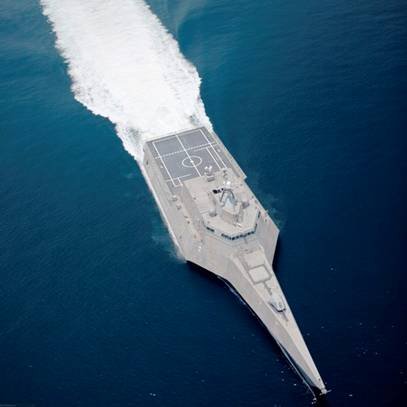 WOW! A couple of these should be able to clean up the pirates off the coasts of Africa…..

It is a Triple Hulled, Weapon-Laden Monster.

Here it is under construction…. 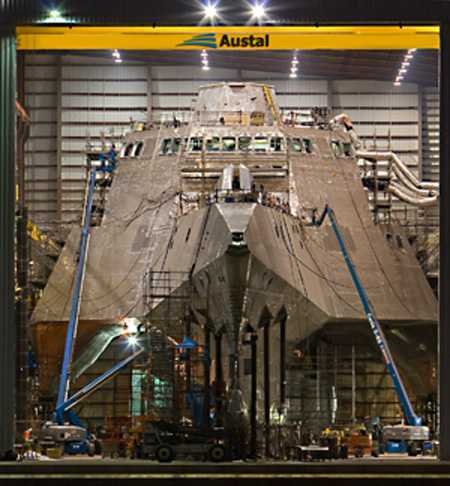 There have been rumors about the U.S. Navy’s speedy new triple hulled ships, but now they’re for real.

The U.S.S Independence was built by General Dynamics. It’s called a “littoral combat ship” (LCS), and the tri-maran can move its weapons around faster than any other ship in the Navy. (Ironic that with all that high tech built in, the ship reminds us of the Merrimac ironclad from Civil War days.)

Littoral means close to shore, and that’s where these very ships will operate. They’re tailor-made for launching helicopters and armored vehicles, sweeping mines and firing all manner of torpedoes, missiles and machine guns.

These ships are also relatively inexpensive. This one’s a bargain at $208 million, and the Navy plans to build 55 of them.

This tri-maran is the first of a new fire breathing breed, ready to scoot out of dry dock at a rumored 60 knots.. It’s like a speedy and heavily armed aircraft carrier for helicopters. 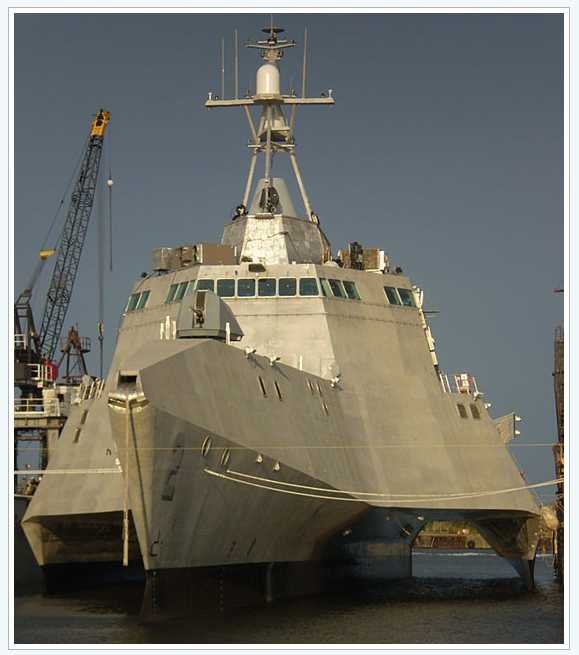 END_OF_DOCUMENT_TOKEN_TO_BE_REPLACED

“A few weeks ago, Harry Reid compared his health care opponents to slavery defenders. Now he’s talking about our President’s ‘light skin’ and ‘negro dialect.’ He disgraces himself almost monthly with some disparaging remark about his constituents, political opponents, or now the President.

“I notice he’s apologized already for these remarks, but we’re still waiting for his apology to the majority of Nevadans who oppose his health care plan.

Oath Keepers – Sherry Jackson, star of “America: Freedom to Fascism” is Being Murdered

American Digest – “They Tell Us We Are Weak. But When Shall We Be Stronger?” (Hat Tip: Larwyn)

New Zeal – David Horowitz and Democrat Pat Caddell Explain the Radical Take-over of the US. Must View!!! (Hat Tip: Larwyn)

Gates of Vienna – Sheep to the Slaughter (Hat Tip: Larwyn)

Atlas Shrugs – ATLAS EXCLUSIVE: Mansor Asad, Muslim Who Screamed “I want to kill all the Jews,” is the Owner of Salafi Mosque Real Estate Tied to Jailed Terrorists

The Radio Patriot – Yo, Algore… Lissen up

Big Government – The Survival of the Republic: A Second Reason for Reading Montesquieu

Yahoo! News – HE SAID WHAT?! HARRY AND THE ‘NEGRO’

AP – CIA bomber calls for attacks on USA in video You can go to the following links for background:

Of Executive Orders and Trojan Horses

Andrew McCarthy has a new article up at NRO that is a must read – key excerpt (Hat Tip: Carolyn Cooke):

That doesn’t begin to cut it. An agency’s having a permanent U.S. presence is more of a reason to bind it by U.S. law, not a rationale for immunizing it. And Interpol apparently has had no difficulty operating under the Reagan-era restraints during the five years since its permanent office opened. Moreover, as Richardson points out, Interpol is not just “any other international organization”; it is an international law-enforcement organization. As I’ve explained before, “what prevents law-enforcement and its controlling government authority from becoming tyrannical” are the constraints of law — in the U.S., such provisions as the Fourth Amendment, the Freedom of Information Act, and other limitations of the Constitution and federal law that protect the liberty and privacy of Americans.

And a very telling quote from Andrea Shea King at The Radio Patriot:

Did you watch the Fox All Star Panel on Special Report tonight? To a man, Krauthammer, Easton and Juan all agreed this was much ado about nothing. I was shocked.

In fact, Krauthammer used the very excuse given here…

If you haven’t read it, read the following article from the New York Times. Glenn Beck mentioned it as did Clyde Middleton of The Patriot Room – key excerpt:

PARIS — Interpol and the United Nations are poised to become partners in fighting crime by jointly grooming a global police force that would be deployed as peacekeepers among rogue nations riven by war and organized crime, officials from both organizations say.

On Monday, justice and foreign ministers from more than 60 countries, including the United States and China, are gathering in Singapore for a meeting hosted by the two international organizations.

It is the first step toward creating what Interpol calls a “global policing doctrine” that would enable Interpol and the United Nations to improve the skills of police peacekeepers, largely by sharing a secure communications network and a vast electronic trove of criminal information, including DNA records, fingerprints, photographs and fugitive notices.

Here’s another article from the New York Times to read as well… (Hat Tip: Jean Stoner)

So what does INTERPOL have to do with the UN? Some critiques state that INTERPOL is not a supranational police agency with investigative powers, nor is it an organization sanctioned by an international governing body (such as the United Nations); however it is widely known that the UN Security Council and the International Court of Justice (the primary judicial organ of the United Nations) have been working very closely with INTERPOL on the fight against terrorist acts by Al-Qaida and the Taliban. This gives many people the impression that INTERPOL is in fact a supranational organization, or at the very least an extension on the UN, and rightfully so because within the last decade they have become synonymous and often indistinguishable.

Many believe that when President Obama enacted his executive order granting INTERPOL full diplomatic immunity; that he opened our nation’s back door to more future international regulation, in affect revoking America’s sovereignty. Based on the history of international governing and policing bodies and President Obama’s enthusiasm to make America an internationally regulated state…the critiques assumptions could be considered well founded. It’s important to note that the concept of granting immunity to foreign nationals in our country is not new; in fact the practice goes back to 1790 when the “Act for the Punishment of Certain Crimes against the United States” passed, wherein basic immunity was granted to foreign diplomats. However, the immunity given at that time had major restrictions placed on it, unlike today where those restrictions do not exist.

This is an excellent article and is another must-read…

The order guarantees that Interpol officers have immunity from prosecution for crimes they may commit in the United States. Ironically, some Interpol nations are attempting to try American intelligence agents for their work abroad in the War on Terror.

This order shows blatant disregard for the U.S. Constitution. While Obama is extending due process rights to terrorists he is weakening those same rights for American citizens. If a citizen were to be prosecuted by Interpol, their newly granted immunity would interfere with the discovery process. Since Interpol files are immune to disclosure, a citizen could be denied his right to see the information used to prosecute him or her.

Obama’s executive order has done more to weaken civil liberties than the much-maligned Patriot Act. The silence in the mainstream media on this issue should scare all freedom-loving Americans. Obama just signed away parts of our precious legal protections.

I would wager that this will bite America in the ass big time. The White House will not comment on it period, so what else can we think? This should not stand… If we open ourselves to international policing with no restrictions, it will lead to no where good and you can bet on that.