Last time I was in Chicago, I got on a train in “The Loop,” to see a young girl, sitting opposite me reading a copy of Ayn Rand’s “Atlas Shrugged.” Sales of this classic book, first published in 1957, are going ballistic.

I first read this book in 1976, my first year out of High School. Brought up, as I was, on New Zealand welfare state socialism, free milk and a sense of eternal entitlement, it was like being hit around the head with a cricket bat.

While I think Ayn Rand’s militant atheism misses the mark, her grasp of political philosophy, sociology, human nature and the principles of liberty are first rate.

As the negative effects of 100 years of “progressivism,” (sent into overdrive under Obama), impact on America, “Atlas Shrugged” looks more like prophecy every day.

Anybody who believes in liberty, whether you’re an atheist, agnostic, Christian, Jew, Muslim, Hindu or Sun Worshiper should take the time to read this book.

A documentary on the novel is coming out soon.

CommieBlaster put this together. Some very good stuff in here – especially the ACORN material.

Obama is either lying to you, or he’s lying to ACORN – you decide.

Loved the intro by the late Herb Philbrick. This man was known to friends of mine. He infiltrated the Communist Party USA for the F.B.I. in the 1950s and dedicated the rest of his life to exposing and educating people about communist activities. 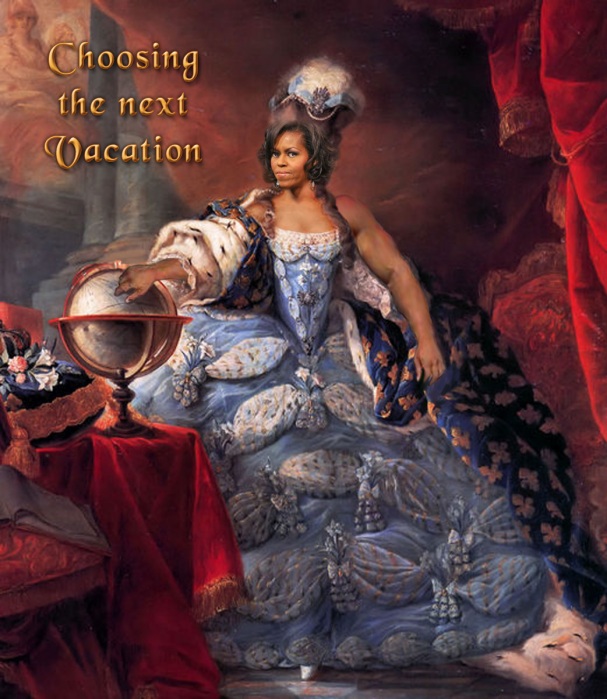 Do you suppose all the bad press she’s getting might bother her? Just a teeny bit? Her shrieking acolytes are gnawing on themselves over it. To wit, this comment from Media Matters (an oxymoron if I’ve ever heard one).

“The idea of comparing a royal-born dilettante to a hard-working, up-from-poverty First Lady demonstrates to me both the hatefulness and the desperation of the deranged.

The ugliness of their communications will continue to drive sincere, well-meaning Americans in droves to the President’s side.”

Here’s another one just for laughs…

It’s also inescapable that Antoinette’s infamy derives not only from her pampered cluelessness, but the fact that she got her F–KING HEAD CHOPPED OFF OVER IT. I’m sure that’s exactly what they mean to imply, to, although I’m sure that moron from American Spectator will remind us that guillotining a black woman doesn’t count as a lynching.

What WOULD they do without the race canard? It’s the only card left in their deck, which has never been full, if you catch my drift…

Vote of No Confidence PDF