While some on the U.S. left are backing away from President Barack Obama, the Communist Party USA is still banking on their “friend.” 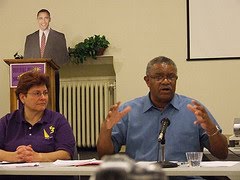 There is a lively discussion in left progressive circles about the response to the tax (and unemployment insurance) extension compromise, and where to go after the midterm election set back. Left and progressive activists and voters have played a very important role in the fight against the extreme right-wing. I think most left people understand that the main danger to democracy and progress is coming from the extreme right, GOP/tea party and their powerful corporate backers.

The Communist Party will not agree with our liberal allies at every turn, but we keep pushing for unity, we keep working to find the tactics that keep a broad labor and people’s coalition, that keeps the movement for change going.

In my view, too many people are arguing that the compromise tax bill “is the last straw” and “I’m through with Obama.” This view singles out the tax breaks for the rich and largely ignores the concessions the GOP had to make to the working class….

In my opinion, a winning strategy has to be based on the real world; on the facts, not on subjective feelings that we all understandably have at this point. Serious change makers should not let those feelings be the sole guide as to how to move forward. If we want to win more economic and democratic rights for working people, minorities, women, young people, etc., it is self defeating to use this tax compromise difference to “break” with Obama. (I have to add that there are some voices who advocate a “break” that were never “with” the coalition to elect Obama in the first place.)

The stakes for our country and world are too high for any break — or left/progressive go it alone — tactics. Theories that promote “the worst things get, the better the opportunity for progressive change” are too simplistic and one dimensional. The problem is more complicated than that.

The economic crisis is deep, and millions of working people are suffering. The facts are that the Republicans policies deepened the crisis yet, they made the greatest gains in the last election.

The times we live in call for a strategy and tactics that will bring victories; victories that can be built on…

Everybody understands that running an election and running a country are different. It is my view that the Obama administration policies and legislative victories have helped tens of millions of working families — perhaps more then any president in living memory — considering the short time and the challenges he faced in office. Much more needs to be done but this struggle is a marathon not a sprint.

Communists say that even though we are not in agreement with the president on many basic issues, he implemented many of his campaign promises. Progressive researchers who track that sort of thing give him pretty good marks.

A significant problem that the president and others had to grapple with was while the Democrats had a majority in both houses of Congress, they did not have a big enough majority in the Senate to stop the filibuster. And on many questions Democratic members of Congress were not united enough to win. It was a fragile coalition to say the least.

The first woman speaker of the House, Nancy Pelosi, and the progressive Democratic leadership did a heroic job from 2006-2010. They passed 290 pieces of legislation in the House that the U.S. Senate never acted on, everything from a clean energy bill to the DREAM Act.

The right-wing opposition to these bills and Obama policies have been unrelenting, unprincipled, well financed and well organized.

In my time, I have never seen a sitting president subjected to such unrelenting, personal attacks. The level of racism and red-baiting, including violent threats, has been unprecedented.

What does it achieve when some on the left join in with the right wing, proclaiming Obama a liar who had deceived the voters; and worst of all that he was no different than Bush.

Tell that to all those workers who were able to put food on the table and keep their jobs and homes because of legislation proposed and passed by Obama and the Democrats in the Congress.

If it were the case — i.e. Obama is Bush, etc. — how do we explain those right-wing billionaires who finance so-called tea party and other anti-Obama movements. To these Bush supporters, Obama was the devil incarnate.

Some on the left saw any compromise with the right as “being too soft” rather then what was often a reflection of the real balance of power between the more lock step Republicans and divided Democrats.

I think Obama could have fought harder in many instances, but I also think when the racism was pouring down like acid rain polluting the atmosphere, and staining the political and moral fabric of the nation, the left was amazingly unresponsive. Too many times I heard people say it was Obama’s fault for not fighting back. But the movement could have fought back. Blaming Obama makes it seem that the attacks are acceptable. Is that a principled position? For me, it’s a form of capitulation to the extreme right and racism.

It’s important to note, if the results had been more positive on November 2, the movement would be discussing taking the political offensive to help working people survive this horrible crisis by creating new, green jobs, ending the wars and attacks on immigrants.

The right-wing racist attack did more than mobilize their base, it also demoralized and demobilized Democratic voters. Some Democratic and progressive voters went from a messianic view of Obama to demonizing him. Neither are the right assessments to make.

For progressives, adopting an anti-Obama strategy is totally self-defeating. How do we distinguish ourselves from Sen. Mitch McConnell’s and the Republicans’ main goal of bringing down Obama?

2012 has to be part of any strategic and tactical thinking after these midterm elections. The next president will either be Obama or some right wing Republican. That’s the reality for now. If the Republicans take control of all three branches of government — again — that will put the great majority of people on the defensive in the fight for economic and democratic rights. To not see that is a gross miscalculation of the right danger.

I think the most explosive issue is jobs and related economic crises — like evictions — facing working people. This will not be a easy time for the broad left/center coalition that brought the victory in 2006 and 2008.

One thing is clear to me, this fight cannot be won by making Obama the enemy. Those who are looking for a third party candidate on the left certainly have a right to do that, but it’s not the path to victory at this stage.

The path to victory is in the critical fight for jobs and related issues. It’s clear that the crisis of massive joblessness is not going to be solved in the halls of Congress and the White House alone. We need a united visible movement of the jobless to make it happen.

There needs to be a two year offensive for jobs through public works. In every city, state and town across the country we need to raise the demand.

Martin Luther King holiday weekend is an ideal occasion to kick off what should be a two year campaign all across the country.

King struggled for peace, jobs and freedom. The issue of jobs is not just an economic issue but a moral one, too. It can be linked to other issues including child welfare, poverty, immigrant rights, education, racial and gender equality, military spending and housing crisis.

Such a broad, grassroots movement will give real momentum to and build muti-racial unity for the 2012 elections. Franklin Roosevelt needed social movements to deliver the New Deal, and today, so does Obama.

In the last section, Tyner reveals just how the Communist Party plans to help Obama with some pressure from below – a major nationwide campaign for government “jobs creation.”

The call will come, from mass communist inspired marches and demonstrations, from communist led unemployed groups etc. to cut military spending in order to create jobs. The more people the Communist Party can get onto government jobs programs by 2012, the better the Democrats will do in the elections.

Its all about power. We should never underestimate the Communist Party’s lust for power and their proven expertise in gaining it.