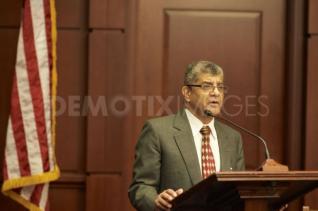 When I received word of the fatal car bomb attack on Coptic worshipers leaving the Saints Coptic Church in Alexandria after this year’s New Year’s mass, I recalled my earliest memories of the first of these brutal, senseless and unprovoked attacks against the Coptic people in my homeland of Egypt.  Eighty-three Christians were massacred in El-Zawia El Hamra, Cairo in 1980 by Muslim believers committing an act of jihad similar to this current episode and similar to what we now face in other parts of the world today. We took our persecution for granted and I wondered then where my country was heading.

Egypt is no longer a civilized country when Egyptian Copts are vulnerable to barbaric attacks and treated at best like strangers and more often like enemies in their own land. As a native Egyptian Copt growing up in Cairo in the 1950s and ’60s, I was mindful of our separate and diminished role. We lived as immigrants, without full rights, within our own land. The discrimination was real and I had little hope for my future. Never mind that my beloved country was once the cradle of civilization and that my roots extended deep into the stories of the Pharaohs.

Growing up in Egypt as a Copt, I witnessed the growing presence of Islam in our streets and in our government day-by-day and I sensed the decline of a civilized country. As Western values sought to take root and usher in a new modernity, the predominant Arab-Muslim influence was taking the culture backwards toward more primitive notions. What happened to this great center of civilization is represented today in the horrific and inhumane treatment of the Copts. This theocratic state lashes out against those who live outside the chosen religion within Egypt and prepares Egyptian Muslims to do the same beyond their borders. Mohammed Atta, for one, hails from Egypt.

Examining the past sixty years of Egyptian rule to understand the stages of its decline, we see how a once-highly civilized nation was thrown to the wolves and how barely a shred of decency and humanity remains. Egypt’s democracy today is little more than a stage show for a world audience.

The idea of the Arab Omma (nation) started with Nasser. In 1964, he attempted to destabilize Saudi Arabia indirectly by sending Egypt’s army to help Yemen in their war against the Saudis. He pressed Egyptian citizens to work in Saudi Arabia as a fifth column as part of his master design to become the supreme ruler over Arab nations and the Islamic Omma. Nasser followed the ideology of Hassan El-Banna of the Muslim Brotherhood and with this, he generated the Fedayyn terrorist organization headed by Arafat to fight Israel.

Nasser hid his real goals for Egypt behind a false socialist agenda, using it to confiscate private property and sell it to the poor, who became indebted to the state. He nationalized the majority of Egyptian private businesses owned by Christians and Jews. He further damaged the Coptic Church by intercepting the funds in personal family trusts en route to church coffers.

Following Nasser, Sadat took control in 1970 along with his contingency of the Muslim Brotherhood, whom he was slowly releasing from jail. He welcomed in a new wave of Islamists and over time, he began to expunge the Nasserian believers and followers of socialism. Even worse for the country, those Muslims sent by Nasser to Saudi Arabia now returned to Egypt fully absorbed in Wahhabi and Sufi doctrine — a devastating prospect for the Copts and other minority religions of Egypt.

Under Sadat’s leadership, discrimination against Copts increased. Church leaders came under attack for the first time since the coup d’état of 1952. The conflict reached its height when various priests were arrested and Sadat decided to commit the Coptic pope to an asylum. The church became a target for violence and Christian women and girls began to be kidnapped and forced to convert to Islam.

Mubarak followed the footsteps of his two predecessors as he furthered the Islamization of Egypt, which in turn increased the level of discrimination against Copts. In nearly thirty years of ruling Egypt, Mubarak did nothing of significance to facilitate relations between Christians and Muslims. Instead, he carried out the original Islamization of Egypt designed by those who authored the Coup of 1952 (the revolution) that overthrew King Farouk.

Today, Mubarak cries out for the rights of Arabs in Gaza but will not grant the right of safety to his own Egyptian citizens. Mubarak sponsored a U.N. law against defamation of religion, but allows daily defamation of Christianity through the Egyptian regime-controlled media. Mubarak condemns Israel for being a Jewish state and not a secular one. but rules a country in which the state constitution contains Islamic religious sharia law with jurisdiction over all citizens.

Beginning in 1981, Mubarak ran for office four times unopposed. In 2005, he won his fifth term. This time, he was challenged by opposition parties (Copts not included, Muslim Brotherhood excluded), which were allowed to register for the first time, but they were too weak and restricted by Mubarak’s regulations to be a significant force. The emergency law Mubarak put in place the first day he took office has ever since prohibited public gatherings, including political rallies and protests, without government permission. Particularly damaging to the electoral process is the current law that can imprison a journalist whose speech is “offensive” while covering political campaigns. Imagine such deterrents to political organizing for the Copts or any other minority.

Copts living outside Egypt in America and elsewhere in the West are fighting not only the inequities of the Mubarak regime, but also the force that fuels it: the rigidity of Islam. That is why Copts are especially cautionary regarding Islamic immigration to the free world. When Copts remained largely powerless and passive under Egypt’s Muslim rulers of the past sixty years, they witnessed their freedoms gradually slip away with the buildup of a religious Islamic state and a sharia-compliant nation. Copts are now very worried for America.

Muslims in America receive justice in our courts and freedom to worship, but Copts have no hope for either in Egypt. It is no surprise to Copts that America’s freedom is enabling Muslims to assert their right to rule their members by the restrictive Islamic sharia law. Such allowances will weaken Western nations as it has Egypt. Copts cannot be blamed for seeing the hypocrisy in Muslims requesting special religious privileges in America while Copts in Egypt continue to be forced to worship in fear under Islam — churches remain unsafe and barriers remain to building and renovating churches.

In the words of former Muslim and Dutch Parliamentarian Ayaan Hirsi Ali in her book Infidel, “When people say that the values of Islam are compassion, tolerance and freedom, I look at reality, at real cultures and governments, and I see that it simply isn’t so.” Copts agree that Egypt is one of those realities. Will America be another?

Ashraf Ramelah is founder and President of Voice of the Copts and has been invited to speak before the European Parliament in Strasbourg to defend the Copts of Egypt.