Leftist Icon Helen Thomas: US Not Always on God’s Side in Israeli-Palestinian Conflict

No, she doesn’t hate Jews at all… This woman is a stone cold hater.

UP, UP AND AWAY: UK INFLATION SURGES TO 4%

Chances for government shutdown ‘on the rise’

Bill Bans Use Of Welfare Cards At Strip Club ATMs

Pakistan Islamists warn of protests if US prisoner freed

INFLATION ALERT: Now Consumers Are Being Warned Of A Massive Hike In Clothing Prices

Next Up In The Insider Trading Investigation: $3.5 Billion Coatue Management

Chicago’s Finances Are Even Worse Than Everyone Thought

Public Worker Unions Get Ready For A Showdown Over Wage, Pension Cuts

Now Is Your Chance To Buy The World’s Largest Farm

Is the White House Choosing Now to Launch a Public Relations Broadside Against Israel?

How Badly Are We Screwed? Very.

Egypt’s oil and gas pipelines at a standstill

Albert Edwards: US CPI Will Come In Hot, And Everyone Is Going To Over-React

STOCKS LEVITATE AFTER OBAMA UNVEILS MONSTER DEFICITS: Here’s What You need To Know

How Food Price Inflation Will Affect Everything You Eat Today

Deception at the Fed

The Two Faces of Ben Bernanke

U.S. Economy Flight 666, On A One Way Inflation Ticket To Zimbabwe

Teacher Re-Writes the Pledge of Allegiance

Federal deficit on track for a record this fiscal year

President Obama’s 2012 Budget Builds on Failures of the Past

More on battling rising prices at your supermarket

Clientitis at the U.S. Mission to the United Nations?

Now Is the Best Time to Defund Obamacare

Is the President’s Small Reactor Push the Right Approach?

RED ALERT email between Metal Experts – about Confiscation of Gold and Silver by the U.S. Government – Potentially this year for a New World Currency – from Multiple High Inside Sources. (Hat Tip: Brian B.)

Your Hometown & the United Nations’ Agenda 21 (Hat Tip: Brian B.)

How Could Anyone Have Guessed?

Bartering, Inflation and Growing a Garden (Hat Tip: Brian B.)

NPR Thanks Obama For Continuing to Fund Their Leftwing Propaganda

Does Madam Pigford Really Want Her Entire Racist GOP-Bashing Rant to Be Aired in Court?

Will the Muslim Brotherhood Win in Egypt? (Hat Tip: Brian B.)

All children to be registered in national biometric records (Hat Tip: Brian B.)

Mohamed Atta and the Muslim Brotherhood (Hat Tip: Brian B.)

A Tipping Point Is Nearing (Hat Tip: Brian B.)

Seizing the Future: Budget battle in Washington; Obama: “Live within our means”…by spending into oblivion

Barack Obama’s Budget For 2012: A Complete And Total Joke

‘High Capacities’: If Iran Calls For a Unified Muslim World Coalition, Would That Be a, um, uh…Caliphate?

A lawn forever under construction

The Muni Debt Crisis in 4 Paragraphs

MAP OF THE DAY: These Are The Cities And States That Have Shattered Pension Contracts

Retail Sales Growth Rates Are Slowing, But Not Because Of The Snow

2 Worrying Things That Got Our Attention Today

Will Chocolate once again become a rarefied luxury?

U.S. Corn Reserves at Lowest Level in More than 15 Years

After World War II, leftists in the U.S. State Department and the Office of Strategic Services/Central Intelligence Agency aggressively funded and promoted European Socialist parties as a supposed counterweight to communism.

As most European Socialist parties were controlled or infiltrated by socialists anyway, this simply succeeded in pushing Europe, as a whole, even further to the left. 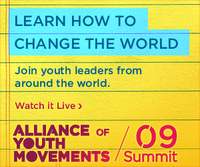 Today the U.S. State Department is actively helping to network “moderate” young Muslims organizations as a counterweight to radical Islam.

Much of this work is being done through the Alliance for Youth Movements, “a non-profit organization dedicated to promoting, connecting and supporting digital activists from around the world.”

The Alliance has had at least some connection to recent events in Egypt and is keen to see this expand.

Over the past few weeks, small-scale protests and plans for demonstrations have taken place across the Middle East/North Africa region. The resignation of Hosni Mubarak last week has further inspired opposition groups to take to the streets and push for government reforms. The extent to which activists are directly collaborating and sharing tactics across borders remains to be fully realized, but it’s clear that organizers are attempting to replicate the Tunisian and Egyptian models of nonviolent and peaceful action. Here’s the latest updates from Iran, Bahrain, Morocco, Yemen, and Algeria… 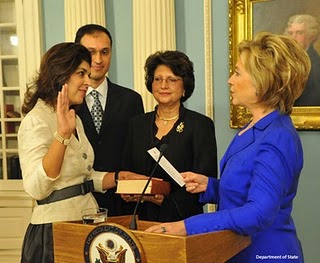 Farah Pandith being sworn in by Hillary Clinton

Farah Pandith was appointed U.S. State Department Special Representative to Muslim Communities in June 2009. Her office is responsible for executing Secretary Hillary Clinton’s vision for “engagement with Muslims around the world on a people-to-people and organizational level.” Pandith, a former Term Member of the Council on Foreign Relations. reports directly to the Secretary of State.

Here Farah Pandith addresses the Alliance for Youth Movements Summit in London on March 11, 2010. Cut through the jargon to see how “soft” revolution works.

First speaker here is from Egypt.

Here Farah Pandith makes it very clear she is working an agenda laid out by Hillary Clinton and Barack Obama.

Will this State Department effort actually achieve its stated intentions? Will it empower moderate Islam at the expense of the radical elements? Or, like many State Department initiatives in the past, will it be hi-jacked to serve more dangerous purposes?

The very intelligent, personable and committed Farah Pandith is right that young Western and Muslim activists working together may change the world.