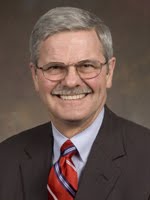 No State Senator bears more responsibility for the recent events in Madison, Wisconsin than Mark Miller. As Democrat minority leader, Mark Miller led a a boycott of all 14 Democrat State Senators. The group all bailed to neighboring Illinois on February 17, denying Republicans a quorum in the Wisconsin State Senate, so they could not pass Governor Scott Walker’s controversial “Budget Repair Bill.”

Even before thousands of socialists and labor unionists descended on the State Capitol, Miller reportedly worked with Madison Mayor Dave Ciesliewicz in an attempt to persuade the Secretary of State to delay Scott Walker’s Bill, so that Ciesliewicz could sign off on City union contracts before the Bill was passed.

D.S.A. has a policy of infiltrating and influencing state legislatures nationwide. DSA’s members and sympathizers, posing as Democrats, hold key positions in several state legislatures, including New York, Michigan, Illinois, Maryland, Rhode Island, Massachusetts, Minnesota and Wisconsin. These covert socialist supporters are then used to put D.S.A.-drafted legislation before their legislatures and agitate and lobby for its passage.

As the most powerful Democrat in the Wisconsin State Senate, Mark Miller would be an obvious target of D.S.A. attention.

Is there any evidence that this has occurred?

Under the heading, “How did our candidates do?”, Alt listed D.S.A. successes and failures in several states, including Wisconsin.

Mark Miller, then just elected to his first term in the State Senate, rated a mention. 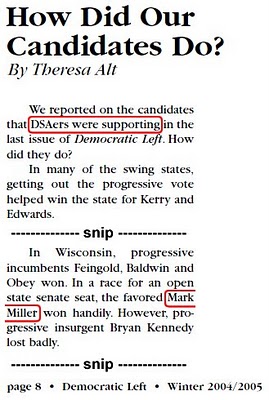 For more than a decade D.S.A. has been a leader in promoting “single payer” (socialized) health care legislation in Congress and in state legislatures across the U.S.

Coalition for Wisconsin Health Treasurer at the time was the Rev. George Robson of Wisconsin United Methodist Federation for Social Action. Robson was also the co-chair of Madison Democratic Socialists of America.

The organization’s Vice Chair was Linda Farley, MD, a socialist and an activist with Physicians for a National Health Program – an organization founded and led by prominent Chicago D.S.A. member and “single payer” activist Dr. Quentin Young.

The “Godfather” of the “single payer” movement in the U.S., Young was also a friend, physician and political mentor to Barack Obama. Young claims to have influenced his protege in favor of “single payer” health care when Obama served in the Illinois State Senate. 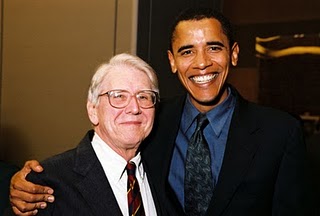 Comrade Davis has been very active in recent events in Madison, even attempting to organize a campaign to “recall” several Republican State Senators. 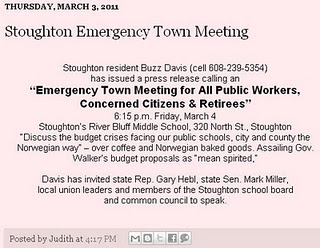 Mark Miller clearly has some ties to Democratic Socialists of America.

It is also clear that D.S.A. is using the Madison turmoil to push its own socialist, anti-GOP agenda.

The question is – how much loyalty does Mark Miller owe to the D.S.A. Marxists and is that loyalty in any way impacting on his decision making as an elected representative of the people of Wisconsin?

Perhaps some brave reporter should put the question directly to Senator Miller. If they can find him.