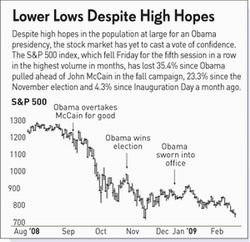 In the summer of 2008, as McCain and Obama were in the midst of their campaigns to capture the presidency, a series of events dramatically changed the focus of the campaign from Iraq to the economy. From that point on, Obama took the lead and eventually won the presidency.

Now, a full two years later, the Pentagon has issued a report on the series of events that led to the 2008 economic crash. Bill Gertz writes in the Washington Times:

Evidence outlined in a Pentagon contractor report suggests that financial subversion carried out by unknown parties, such as terrorists or hostile nations, contributed to the 2008 economic crash by covertly using vulnerabilities in the U.S. financial system.

“There is sufficient justification to question whether outside forces triggered, capitalized upon or magnified the economic difficulties of 2008,” the report says.

Notable for its’ absence is any suggestion that the economic events that arguably catapulted Obama into the White House may have originated in our own political system.

Consider: The economic house of cards started tumbling on June 26, 2008, when Senator Chuck Schumer leaked a memo questioning the solvency of IndyMac bank. This memo precipitated a run on IndyMac which led to its failure. Federal regulators pointedly cited U.S. Sen. Charles Schumer, D-N.Y., in explaining the bank’s failure. “The immediate cause of the closing was a deposit run that began and continued after the public release of a June 26 letter to the OTS and the FDIC from Senator Charles Schumer of New York.”

As I wrote in February of 2009, this event, coupled with the Lehman Brothers collapse in September, marked the beginning of the current economic meltdown and provided the environment that enabled Barack Obama to focus on the economy instead of his position on Iraq – and, not incidentally, resulted in his election as President.

For the last two years, the media has neglected to connect the dots regarding the strange gyrations in our financial markets that started in the summer of 2008. After Schumer caused the run on IndyMac in June, the government moved in:

Sept. 15, 2008: Obama and McCain are virtually tied in their race for the presidency. Out of nowhere, in the space of less than 2 hours, the Federal Reserve noticed a tremendous draw down of money market accounts in the U.S. to the tune of $550 billion. Rep. Paul Kanjorski of Pennsylvania said that if authorities had not closed the banks, $5.5 trillion would have been withdrawn from US banks, which would have caused the collapse of the US within 24 hours.

This seminal event marked the ascendancy of Obama’s candidacy, and arguably resulted in his election as president.

Obama continues to stoke the fears of imminent crisis, actually using the word ‘crisis’ a total of 26 times in one speech.

Enter George Soros. The infamous one-worlder, billionaire George Soros adds his voice to the media doomsayers by opining that the world financial system has effectively disintegrated, adding that there is yet no prospect of near-term resolution to the crisis.*

The series of ‘inadvertent errors,’ deliberate obstruction, political shenanigans, behind the scenes manipulation of the money markets and non-stop calls for immediate infusions of taxpayer cash, brought the U.S. to its knees by February 2009. And continues to this day.

The newly issued Pentagon report, along with the media and our elected officials, seem intent on not connecting the dots, considering only foreign enemies as the possible cause of the financial meltdown:

This author believes there is enough information to at least consider that this crisis was manufactured for political gain. Right here at home.

This article was first published in American Thinker on March 4, 2011.