Representatives of several Arab communist parties met in Beirut on the 18th and 19th of February in an Arab Left Forum meeting organized by the Lebanese Communist Party. 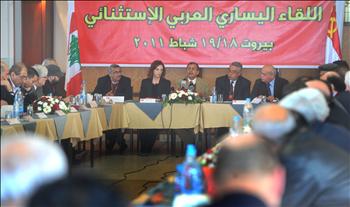 The urgent meeting was called to coordinate communist response to the wave of revolutions sweeping much of the Arab World. If successfully implemented, the decisions laid out at this meeting will affect not just the Middle East, but the entire planet.

Some excerpts from the statement issued by the Exceptional Meeting of the Arab Left Forum, with emphasis added.

These two revolutions in Tunisia and Egypt have formed a qualitative jump in the Arab political life, as they have demonstrated that progressive change is possible. Indeed these two revolutions have shown that victory over despotic regimes characterized by oppression, exploitation, impoverishment of the people, complete subservience of national economies to the IMF and the World bank, and complete subservience of their policies to the Imperial – Zionist project in the region – is also possible. And so we witness the winds of change shaking the thrones of the rulers of Yemen, Bahrain, Iraq, Jordan, Algeria and Libya amongst other Arab Countries as well.

The mass movement and militancy that we are witnessing has opened up a new horizon for the Arab world. A horizon created through the struggle of the youth and the workers of Tunisia and Egypt, and with significant and effective participation by Arab women. This raises the opportunity and the challenge for the forces of the Arab Left to unify themselves under a program for democratic and social change with two main and related tasks.

Firstly, such a program is necessary to confront reactionary internal forces attempting to exploit the mass popular awakening in Egypt and Tunisia in order to serve their own agendas which does not entail any radical change from the current status in the Arab world. On the contrary, these reactionary agendas would reproduce the same regimes albeit in a novel shape and form.

Secondly, such a program for the unification of the Arab left forces is also necessary to effectively confront the Imperialist American plots and Zionist occupation and assaults under a banner for real and effective change.

In the current revolutionary moment we are witnessing, the Arab leftist forces and parties gathered in Beirut decided to entitle their exceptional meeting, The Martyrs of the Tunisian and Egyptian Revolution and the Other Arab Intifadas. Those present agreed on the following :

1. The Arab Left Forum in its exceptional meeting stressed its support and backing, and the backing of the Arab left parties, to the Revolutions of Tunisia and Egypt and reiterated that these revolutions were an inevitable conclusion to the accumulation of years of struggle beginning from the late seventies of the last century against these two regimes characterized by dictatorship corruption and subservience to USA. Those gathered also extended their respectful salutes to the martyrs and the injured of the two revolutions – these youths who bravely and steadfastly stood up to confront and resist the blood-thirsty regimes and their tools for torture, oppression and domination.

Those gathered also saluted the martyrs of the other Arab popular intifadas against the oppressive regimes of Yemen, Bahrain, Iraq, Jordan, Libya and Kuwait. Finally, the Forum also extended its salutes to the martyrs of the resistance in Palestine and Lebanon.

2. The first task of the Arab Left forces today is to strengthen and consolidate the revolutionary moment that our region is witnessing. This revolutionary moment should further be radicalized through an agreement on a program for change where methodological linkages will be made between the struggle for liberation and independence and the struggle for democratic and social change. This programme is based on the stance and position of the left in effecting such an internal change, and in resisting occupation and imperialist aggression headed as usual by the USA and the Zionist movement.

This notion for national resistance movements imparts on these movements a liberation dimension which in turn lays the foundation for a new Arab liberation movement where the struggle for internal change against the despotic regimes is linked with the struggle against Occupation and Israeli – Imperialist plots. This struggle then aims to achieve national, secular, democratic systems of governance which would also resist occupation and confront American and Zionist policies and plots. Such a system of governance would also resist and confront neo-liberal economic policies.

Within this context, the Forum reasserted its determination to hold another meeting devoted to discuss the developments of the international economic crisis and its consequences on the Arab countries in order to elaborate an alternative vision with a socialist dimension.

3. The Arab Left Forum reasserts the fundamental and paramount importance of the Palestinian causes which was and remains the central issue of the Arab-Zionist struggle. An effective confrontation of Zionist plots necessitates the:

6. The forum stressed and recognized the fundamental role of the youth in the revolutions of Tunisia and Egypt and in the other Arab intifadas.

This necessitates on the forces of the left to present itself as the true supporters of the ambitions of the youth and their dreams. This can be achieved through the inclusion of the youth demands, concerns and ambitions for change within the programs of the left forces and parties. In this manner, the left can reclaim its position and role amongst the Arab youth.

The Forum stressed the need to carry out an evaluation of previous programmes and to develop a programme for work amongst the youth and the students, the most important pillars of which must be:

Along these lines, those gathered reiterated and reasserted the decision from the previous meeting, to hold a leftist Arab youth camp under the banner of The Role of the Youth in Social Revolutions and in Resisting Occupation. It is planned to hold this meeting in Beirut between 14 and 20 September 2011 to coincide with the 29th anniversary of the launching of the Lebanese National Resistance Front with the aim of becoming a regular annual event.

7. The forum agreed to develop a common media plan with a maximum period of one month. Such a plan will take into account the ways to benefit from modern communication tools in the struggle being carried out by the forces of the left. It was also agreed to link the websites of the various parties and forces participating in the forum. In addition it was agreed to develop a plan for an Arab leftist media center and develop a plan or a leftist leaning Arab TV station.

8. The forum agreed to consider the forthcoming date of Sunday 20th March as an Arab day for protesting against the brutal oppressive policies and the policies of widespread abject poverty, alienation and subservience – all of which are policies adopted and strictly followed by the Arab regimes.

9. The forum considered that the paper submitted by the Lebanese communist party and the final statement issued by the first meeting of the forum as working papers to be used as a starting point in the drafting of a programme for change.

Does this all sound like “democracy” is coming to the Middle East?

As the Arab Left Forum statement admits, “these revolutions were an inevitable conclusion to the accumulation of years of struggle beginning from the late seventies of the last century… ”

These are not spontaneous revolutions – they are the culmination of years, even decades of patient subversion.

In a few years, maybe even less, most of North Africa and the Middle East (including Saudi Arabia and Iraq) will, on current patterns, be controlled by Arab communists and their Muslim Brotherhood minions, working hand in glove with Russia, China, Cuba, Iran and Venezuela against Israel and the U.S.

If this allowed to play out, $10 or $20 a gallon gas won’t be the big issue. National survival will be.